#Hitler saw that he could unite the people through #Antisemitism, and that he gained a lot of support through his anti-Semitic actions, and these were the stepping stones to Hitler’s becoming an anti-Semite.

#Hitler saw that he could unite the people through #Antisemitism, and that he gained a lot of support through his anti-Semitic actions, and these were the stepping stones to Hitler’s becoming an anti-Semite. pic.twitter.com/0TZgRn5KIJ

In the Jewish calendar, there are special correlations between dates. This is because the spiritual system has an instrument called Zeir Anpin (ZA), which is clothed by Malchut, and the light of Bina enters it from above.

Zeir Anpin has particular openings or holes, through which it shines to Malchut. When some hole corresponds to the receiver, Malchut, the soul, then the light enters it, and this is called “Mazal” — a person’s destiny.

There are special correlations between days and nights and between various times. For example, something that can be done on a particular day and time of night, can also be done on a different day at a different time, and the results will be practically the same.

We see to what extent we are affected by the light of Bina. According to Zeir Anpin and Malchut, each time, we place ourselves in a new fate.

In Judaism, the astronomical tables were put together a very long time ago. Columbus, Newton, and other famous scientists as well as voyagers used them. Abraham himself was a great astronomer and astrologist.

During Abraham’s times, astrology was not like it is today. It was based on a clear connection between the placement of stars, the Moon, the Earth, and the Sun in regard to every person, relative to their soul, taking into consideration when he or she was conceived, born, and so on.

If we knew all that, we would know what will happen to every person and how they will act—their fate would be known. There was no need for fortune telling—this is the map of our destiny.
[243033]
From the Kabbalah Lesson in Russian 12/30/18

Related Material:
Good Luck Creates Fate
How To Manage Success
The Connection Between Our Fate And The Stars

“What Can Jews Learn From The San Diego Synagogue Shooting?” (The Times Of Israel)

The Times of Israel published my new article “What Can Jews Learn from the San Diego Synagogue Shooting?”

“I would rather die or spend the rest of my life in jail than know that I have done nothing to stop this evil,” reads a manifesto published online by the shooter targeting Jews at a synagogue in California this week. As we approach Holocaust Remembrance Day in memory of six million Jews who perished under the Nazi regime, the bloody incident is a brutal reminder that hatred toward Jews remains deeply rooted and far from eradicated. And until we Jews will fulfill our function in the world—to be a conduit for the force of unity to spread—we can expect more such outbursts.

One might wonder why the Jewish people still experiences this scourge after such a long history of persecution. What propels the evil minds of Jew-haters such as the 19-year-old who killed one Jewish worshiper and wounded three others in the attack? The wisdom of Kabbalah describes the phenomenon of anti-Semitism as a law of nature intended to compel Jews to unite.

The attacker was a nursing student and piano prodigy at age four, from a normal family, “the guy next door,” the last person one would suspect to commit such an act. He wrote the following words: “To my family and friends. I can already hear your voices. ‘How could you throw your life away? You had everything! You had a loving family. You had great friends. You had a church… I understand why you would ask this. But I pose a question to you now. What value does my life have compared to the entirety of the European race?” Logic demands to understand why existential threats to Jews come from every kind of background and so randomly.

According to The Book of Zohar, the seminal book of the wisdom of Kabbalah—a book that deals with the internal aspects of the Torah and its secrets, a book that explains the conduct of the world in all its layers—the answer is as follows:

As the heart functions to provide a life-giving flow of blood to the body’s organs, Israel’s function is to provide an indispensable spirit of life—a force of connection and spiritual abundance—to humanity. In other words: Jews are to be “a light unto the nations.”

As long as we Jews maintain unity between us—the same harmony that exists in all its parts of the still, vegetative and living nature—we are then assured of balance, calm and tranquility. But once we abandon our beneficial interconnection, and each becomes entrenched in his own little world, sinking into his egotistical mud, the system’s internal equilibrium destabilizes. Repercussions then appear in the world in a negative form, as outbursts of hatred against Jews.

Thus, the sooner we Jews will wake up to the fact that the exponentially-increasing anti-Semitic acts are trying to tell us that we are lagging in our function toward the world, and that by doing so, we block the unifying force from reaching humanity, then the sooner we will be able to start looking into how we can fulfill our role, establish positive ties, and experience a much more harmonious reality. It is my hope that we will realize this sooner rather than later, which will both spare ourselves and the world from suffering, as well as invite a whole new kind of fulfillment into our lives.
[245487]

In A Group Of Like-Minded People

Question: What should I do when extremely strong negative emotions overwhelm me? Such things cannot be discussed in the group, but I can’t keep them to myself, otherwise a deep depression begins. With whom can I discuss this? Truth be told, I am not in a group yet and am studying the first semester online.

Answer: With whom can you discuss such things if you are not in a group? With no one. I do not advise you to talk to anyone on this subject at all because no one will understand you.

You need to be in a permanent group and then, you will be able to discuss this with those friends who study with you, deal with the same problems, and have the same questions as you. It won’t work otherwise.

If you already have a group and a teacher, then you can ask questions and discuss some topics there. The teacher should put you in circles, from time to time, for you to get accustomed to a discussion.

Question: Should a person share his feelings when he is depressed?

Answer: Yes, you can share what you feel. There is nothing wrong with that. We all go through the same states. So, you will not say anything especially new. There will not be any of your personal, heartfelt secrets.

But you can talk about that only in the group, only with those with whom you study, not outside of the group—not with relatives, not at work, or at home.

Question: Where is the boundary of the prohibition for sharing your internal states with each other and discussing a storm of feelings with other new students?

Answer: I cannot tell you this because you still do not understand what levels we are talking about. I believe you must read the first 20 to 30 articles of Rabash, which explain the group work.

It is possible to discuss states of your spiritual development, your spiritual life among yourselves in a group. But only in the group.
[241845]
From the Kabbalah Lesson in Russian, 12/16/18

Related Material:
Why Conceal Internal States?
The Best Healer
The Secrets Of The Heart 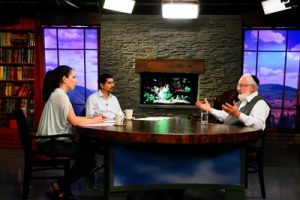 Our relationships are a key component of our quality of life. How do we project a mood into the environment and how we will create happiness around us?

People “infect” each other with pursuits, passions, and desires. People are built from the environment that surrounds them since we are all connected in a network of invisible pipes. The environment can affect everyone with a good mood, including those facing death. In order to improve the mood of others, we project joy and confidence. When we influence someone to be in a good mood, we receive double the happiness!
[142273]
From KabTV’s “New Life #221 – Happiness Is a Collective Phenomenon,” 8/13/13