We all constitute a spiritual, unified system, as one man. But each one feels separate since we are opposite. However, from the upper nature’s perspective, we are all united into a single organism. The purpose of the nation of Israel is to become one large formation where everyone lives together and helps one another.

Kabbalah: Man (Adam), Israel, or “one who is similar to the Creator” (aspires to the Creator)—is the same thing. Mutual guarantee is the general spiritual law. If we can unite according to this law, where every person is responsible for the other since all are connected into a single system, we will become one nation.

One must know that everyone has their time to join the group to the degree of their awareness of this. Therefore, everyone is different, but each should care about all, and the group should be felt as a mutual child. After all, everything we are waiting for will happen only in it!

Since the attainment of the Creator is possible only in a group, we must care only about it. Learn what it should be like for the Creator to be revealed in it. And implement it every day. All the care about our advancement is caring about absorbing into the group and everyone’s unity within in.

A creation can feel only through the contrast between sensations. Therefore, the lower egoism is revealed, the higher the Creator’s greatness is felt. The more contradictions there are in the Creator’s governance of the world, the more effort a person must make, thereby revealing the greater unity.

It is important, despite the emergence of incomprehensible and troublesome circumstances, to still attribute them to the Creator. Do understand that all that seems bad to us is so only in our properties, not yet corrected.
Therefore, all work consists of: a) obtaining a desire to change oneself through envy and jealousy in a group b) appeal to the Creator; as it is written: everything is achieved only through prayer.
And such an attitude toward the upper, perfectly benevolent Creator’s governance is defined as “faith above reason.”

If we felt the Creator, we would do everything selfishly. In order to reveal the Creator’s governance, we must envy the friends and strive to achieve what they allegedly achieved. Although we have no desire to bestow, we would want it out of envy, and then we can ask the Creator for the property of bestowal.

Since we are creations, we can sense only opposite phenomena such as darkness – light. Therefore, egoism is created equal to the Creator, so that we can reveal the Creator against its (light’s) background. We do not eliminate anything, but only replace the meanings—darkness is given to sense the light, while the Creator as the “help against oneself.”

Last night I spoke to the #Jewish community in #Monterey, Mexico. The lecture was dedicated to the issue painful for all world Jews, #Antisemitism.
There were many questions, doubts, anxiety. But in the end, dozens of people approached us to learn where they can obtain the wisdom of #kabbalah. 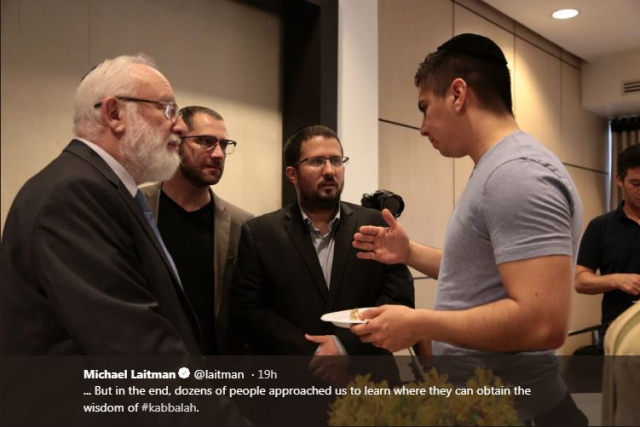 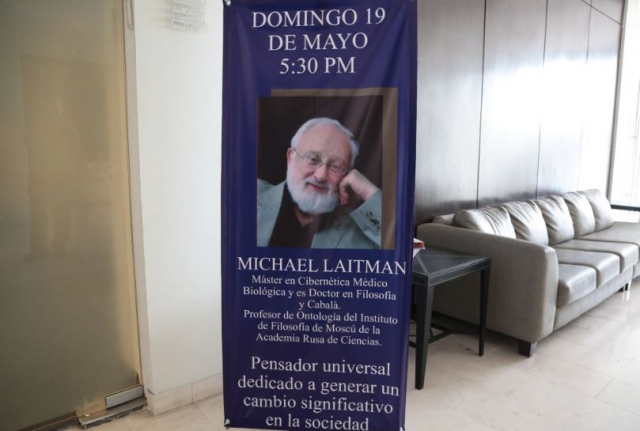 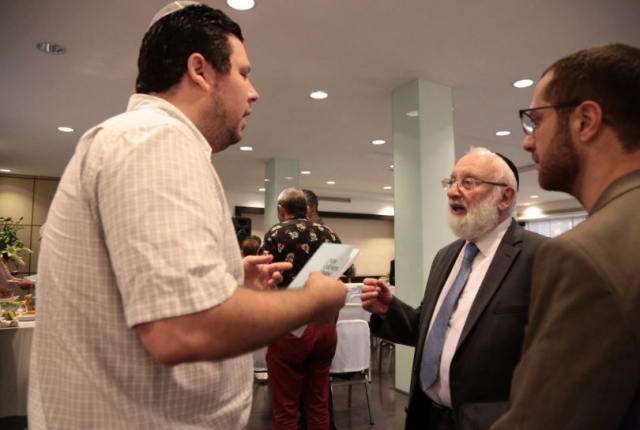 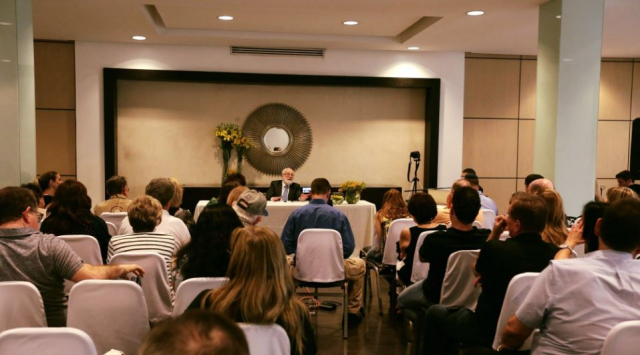 Unity: A Dome Against Missiles

Holocaust Remembrance Day and Independence Day recently occurred in Israel while the country was under constant rocket fire from Gaza. The Creator gives us an opportunity to turn to Him and to awaken mercy from above. If we attribute all of reality to the Creator and to the correction of the world, we must try to see the process of correction in everything that happens. We certainly think of correction as a good life on the physical level, corporeal well-being, but in essence, correction belongs to the soul.

If we understand that the correction should take place in our souls, connecting us to the Creator, we will understand what each missile falling on us means, what it must awaken in us, and who sends it. There is no single event that is not sent from above with a specific purpose; everything is verified to the tiniest detail and connected to a system of forces.

There are no coincidences in the world. We just need to understand what we need to do in order to correct this form of relationship with the Creator, and we have great opportunities for this. Let’s not just sit and wait. Let’s strengthen our work on connection in order to awaken mercy from above, from the upper force. It will advance us and all of humanity not through such negative forces and judgments, but through kindness and mercy.

Let us ask the Creator for that and I am sure we can influence the situation. The only way to resolve this state is greater connection between the people of Israel. We can correct everything through our connection. There is no other way; the world will not let us solve this problem by force because it is becoming more and more anti-Semitic. The world will only rejoice in our troubles.

Therefore, we must correct our attitude toward the world and its attitude toward us. Correction is only possible through the fulfillment of our mission regarding the world, that is, unification of the people of Israel the way the wisdom of Kabbalah teaches us. Our connection will cause the world’s connection. We do not need to call for the world to connect and to perceive Israel in the same way as all the other countries.

It will never happen. Therefore, there is no point to call upon the entire world to eliminate anti-Semitism; it will never disappear, it will only grow. We must correct all negativity only through our inner work, among the people of Israel, that is, through our connection. Through our connection, the light will come to the world, meaning, to become “the light for the nations,” which the people of Israel should become.1
From the 2nd part of the Daily Kabbalah Lesson 5/5/19, Writings of Rabash Vol. 1, Article 5, “What Does the Rule “Love Thy Friend as Thyself” Give Us”
1 Minute 46:55

Related Material:
Israel: Hope For A New Life
How To Transform Enemies Into Beloved Brothers
While It Is Not Too Late

Question: How well should women know the Preface to The Wisdom of Kabbalah (Pticha)? Should it be as much as men do, or is there any flexibility for women?

Answer: Technically, women do not have to study Pticha as deeply as men do, but it is advisable to know its basics. The fact that we have been studying the first paragraphs for quite a while is good. One must learn it well and scrutinize it in himself, go through it. Women also need this.

Kabbalah does not require women to connect on the same level as men, but they should have a general understanding of self-annulment.

Women’s interconnection is a big problem. But they do have to rise above themselves, because when one rises above oneself, without wishing for anything, in full self-annulment, it is similar to being in the light of Hassadim. This is a basic initial state of the altruistic action in Kabbalah, and women must execute it. There is no spiritual world without it, no connection with the Creator or anything else.

One is obligated to rise above oneself despite the problems that the Creator brings up in each of us: laziness, lack of importance, displeasure about something—no matter what it is. But one must rise above it.

Connection with others is more suitable for men than for women. It is enough for women to rise above themselves, and by doing so, they already begin the spiritual work.

Therefore, they do not require the ten as much as men do. Women must gather in it only to annul themselves. But they are not required to be connected with others in one heart like men are. These are different levels of egoistic nature. If they simply annul themselves, they will reach the level similar to the men’s connection.
[244818]
From the Kabbalah Lesson in Russian 4/4/19

Related Material:
The Specificity Of Women’s Work
Women’s Spiritual Purpose
The Spiritual Path Of A Man And A Woman

Filed under: Women's Spirituality - No Comments →

New Life #59 – What Is Fate and How Can I Control It?
Dr. Michael Laitman in conversation with Oren Levi and Nitzah Mazoz

Our fate depends on our connection. The wisdom of Kabbalah explains to us what controls us and how we can rise above it and determine our own fate. The Torah requires that we live according to the rule, “love your neighbor as yourself” and the wisdom of Kabbalah teaches us how to apply this in practice. All our problems stem from the human ego, which separates us, but if we unite, we become like the higher force, which is the good that does good and we subsequently judge ourselves and the whole world favorably.
[88729]
From KabTV’s “New Life #59 – What Is Fate and How Can I Control It?” 8/20/12]

Lesson on the Topic “Preparation for the Convention”