How To Use Disturbances Sent By The Creator

Question: How can one effectively use disturbances, the so-called blows, sent by the Creator?

Answer: With love. I understand that these are, as a rule, unpleasant feelings, but we must perceive them purposefully.

To the extent that we can relate with love to the manifestation of the Creator in everything that surrounds us, we will begin to feel that His attitude to everything comes only from love and that there is nothing in the world but love.

What distorts the enormous field of love is only our disparity with this field. Therefore, if someone needs to be corrected in the world, it is only you, and then you will feel the whole world as perfect.
[245902]
From the Kabbalah Lesson in Russian 1/27/19

Related Material:
Disturbances Are The Creator’s Language
The Creator Governs With Love
Keeping The Direction Towards The Creator

Answers To Your Questions, Part 236

Answer: The Creator is an entity that includes everything within it in absolute good, mutual unity.

Question: I have an unusual problem. Lately I have stopped feeling: feeling the energy of places, of people, generally of everything. My attention is floating somewhere, I cannot concentrate, everything happens as if not in me. I am a practical person, engaged in healing and various sciences. I have come across a situation like this for the first time and I cannot cope with it. Can you tell me something or help in some way?

Answer: I advise you to focus your attention on the definition of the upper force: absolute goodness and complete interconnection between all created beings. Delve into this definition until you begin to feel connected with Him.
[244145]

Do Wars Lead To Progress?

Question: You say that mutual annihilation leads to regression in the development of society, but ultimately doesn’t war usually stimulate productive forces?

Answer: Yes, wars stimulate forces of production, but they fail to contribute to society’s and people’s inner development, which is what really matters. On the contrary, they usher men into the next double helix, and therefore, technical progress is the only progress they bring.

Of course, if it were not for wars and threats, humanity would have developed much slower on a technical level, and consequently, in science and in other areas, but not in the social sphere.

Wars bring about society’s regression, not progress. The wounds that remain after wars take a very long time to heal and are practically incurable. They lurk somewhere inside as we try not to deal with them, but in fact, they disallow the construction of normal relations.
[244955]
From the Kabbalah Lesson in Russian 1/13/19 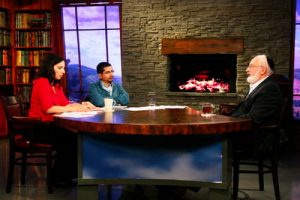 True self-awareness can only develop in a society whose goal is to develop the characteristic of giving. The nature of the world is reception. In order to investigate it, we must rise to the opposite characteristic of giving. Only when a person transcends reception for oneself and acquires the quality of giving does he begin to develop true self-awareness. This can only happen with the help of society, through social interactions. In such a society, a person stops feeling afraid and ashamed. He can be open with everyone and become comfortable with himself. In this way, people can achieve a life of happiness and balance between receiving and giving.
[143008]
From KabTV’s “New Life #236 – Self-Awareness and Happiness,” 10/6/13

New Jersey Convention 2019, “To Be A Spiritual Pipeline,” Lesson 8