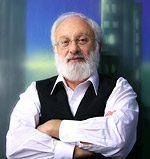 Founder of the Bnei Baruch Kabbalah Education & Research Institute, which is dedicated to teaching and sharing the wisdom of Kabbalah. Professor of Ontology, PhD in Philosophy and Kabbalah, and MSc in bio-Cybernetics. Father of three and grandfather of three.

I was born in 1946. When I graduated from college, I chose to major in bio-Cybernetics. After my internship I worked at a Hematology Research Center in Leningrad. Even as a student I was impressed by the wondrous manner in which the organic cell sustains life. I was in awe by the way in which the cell harmoniously incorporates itself in the rest of the body.

It is quite common to study the structure of cells, their functionalities, and to ask about the purpose of their existence, meaning how they function with respect to the rest of the body. But the question I could not find the answer to concerned the purpose of the existence of the whole body.

I assumed that like the cells in the organism, the body is a part of a greater system, towards which it functions as a part of the whole. But my relentless attempts to research the subject within the scientific arena were repeatedly met with denial and rejection. I was told, “Science does not deal with such questions.”

This was in the 1970s in Russia. When I resolved to flee Russia, I was once more hopeful that, perhaps in Israel I would be able to continue with the research that had captivated me.

In 1974, after four harsh years of being a refusenik (one refused to leave Russia in the days of the Soviet Union), and after a long and arduous journey, I finally arrived in Israel. When I approached the universities and academic institutions that operated in Israel at the time and presented them with my ideas, they offered me (yet again) to perform research on a particular, limited scale. This made me realize that I will have to search for a place where I could study the comprehensive systems of reality.

After many years of searching, I had finally found my teacher—Kabbalist Rav Baruch Shalom Ashlag (the Rabash), the firstborn son and successor of the great Kabbalist Rav Yehuda Ashlag, known as Baal HaSulam (Owner of the Ladder) for his Sulam (Ladder) commentary on The Book of Zohar. For the next twelve years, 1979-1991, I never moved from the side of Rabash, until his passing. To me he was “The Last of the Mohicans,” the last in the long dynasty of Kabbalists that stretched thousands of years back. The whole time I was with him, I served as his personal assistant, his secretary, and his prime student. With Rabash’s encouragement, I wrote and published my first 3 books in 1983.

After the passing of my teacher, I began to develop the knowledge I had acquired and circulate it openly, as he had instructed me to do. I considered it a direct continuation of his way.

In 1991 I established Bnei Baruch, a group of Kabbalah students that implements the legacy of Baal HaSulam and Rabash on a day-to-day basis. Bnei Baruch has become an extensive international organization with thousands of students the world over. Today, the members of Bnei Baruch research, study, and circulate the wisdom of Kabbalah.

We host the largest website on Kabbalah, www.kabbalah.info, in over 30 languages. The site contains the web’s largest Kabbalah resource: books, articles, films, lessons, and lectures on Kabbalah. All the material is available to the public free of charge.

In recent years we have established a film production company to produce educational films, lessons, and lectures aired daily on cable and satellite TV in Israel and all over the world. The content is produced at the center in Petah Tiqwa, Israel, which is also home to the Bnei Baruch Kabbalah Education Center (Beit Kabbalah L’Am in Hebrew), our lecture hall. The Bnei Baruch Kabbalah Education Center is host to a variety of courses on Kabbalah.

Alongside this activity, we have established KabU, which provides entry-level courses, guided study and a student community to study the wisdom of Kabbalah.

Additionally, we have collaborated with numerous international research institutions. As part of this activity, we have been invited to join the World Wisdom Council (WWC), headed by Prof. Ervin Laszlo, who was nominated for the Nobel Prize in 2004 and 2005.

In recent years we have participated in several international events. Among the locations we have appeared in are San Francisco, Tokyo, Arosa (Switzerland), Düsseldorf (Germany), and Monterrey (Mexico). The goal in all these events was to circulate the knowledge contained within the wisdom of Kabbalah and share it with humanity at large.

I am committed to continue in the footsteps of my teachers, Baal HaSulam and Rabash, to publicly and openly disseminate Kabbalah to anyone who wishes to know it. I am not introducing anything new; I am merely simplifying and interpreting the writings of my teachers to my contemporaries.

Thus, I hope to help bring the wisdom of Kabbalah out of its sheath and enhance its desperately needed expansion, as Baal HaSulam had instructed in his books. This was also Rabash’s instruction to me, and this is what I try to achieve, to the best of my ability and understanding. This process is of the utmost importance to the future of Israel and the world at large.

But first, authentic Kabbalah must be cleared of all the misconceptions that have been attached to it over the years. Authentic Kabbalah is not related to healing, charms, mascots, holy water, red bracelets, or meditation. It is also unrelated to any mysticism or religion.

The wisdom of Kabbalah, as defined by the greatest Kabbalists, is a method to correct man and the world. And it is emerging today because today humanity needs it like air.

My latest book, The Jewish Choice: Unity or Anti-Semitism, is now available at Laitman Kabbalah Publishers and Amazon.