What will a man of the future be?

The purpose of human development is to change our properties to the extent that our locked, deaf hearts open to others.

This goal is set for us by nature. When we pursue this purpose, we discover new sensations and replace our egoistic desires with the desire to bestow. This new attitude will allow us to discover a new world.

Question: What is the desire to bestow?

Answer: It is a desire to give, share, and take care of others. With all our heart, we want to be connected with something that is outside us.

But so far we cannot treat our neighbors in this manner since people around us act egoistically and all we’ll achieve by behaving altruistically is that they will take advantage of us. That’s why we start in a small group that strives to annul selfishness and connect with others. We begin sensing a new reality in our common, benevolent, mutual desire.

Question: Will people of the future be completely different from our contemporaries as if they are aliens?

Answer: The only thing that will be different is their attitude to still, vegetative, animate and speaking levels. In the future, people will sense others as themselves.

But this is a gradual process. If we treat others altruistically now, they will simply take advantage of us. That’s why we open our hearts only to those who are ready to respond to us in the same way.

On The Threshold Of A Third Intifada – Part 11 “Do We Only Need To Wait For Everything To Calm Down?“

Question: Why are people taking the wave of terrorism so passively, saying that it we only need to wait and everything will calm down?

Answer: A person doesn’t see the overall picture, the internal processes that are happening within nature, how we constantly prepare new problems for ourselves that are about to happen in the future. We invite everyone to come and learn the wisdom of Kabbalah, to understand how everything is arranged. Love of others is the main law of the Torah and the wisdom of Kabbalah. Everything addresses only that.

In Sefer HaTodah, it is written that we must strengthen our unity so that enemies will have no control over us, and if we see today that enemies are rising up and overcoming us, it means that there is no unity between us, even the minimal amount that we now require.

Question: So, what must be done practically?

Answer: First of all, it is necessary to learn or at least to turn on our channel, Channel 66, to understand what the wisdom of Kabbalah is talking about. This will have a positive influence on everyone and will make it possible for the upper force to begin to unite us.

I want to emphasize that we do not unite ourselves through our own power. We only make it possible for that power that is already found in nature to connect us. If we want it to do this work on us, it will realize our connection and unity.
[168264]
From the Israeli Radio Program 103FM 10/11/15

Filed under: Israel, Israel Today, Nations of the World - 1 Comment →

Question: A scientific mathematical device makes it possible to accurately and adequately describe our reality. For example, quantum electrodynamics describes the properties of an atom with fantastic accuracy through a mathematical method.

Can Kabbalah explain the adequacy and effectiveness of the mathematical apparatus? Many mathematicians and theoretical physicists think that mathematics in itself is a separate reality.

Answer: Mathematics doesn’t talk about things directly; on the other hand, it is a very concrete discipline. It is really impressive! In other words, mathematics is a language that suits absolutely all sciences.

The wisdom of Kabbalah, in practice, too, is built on calculations of heights and levels and grades similar to grading electronic charges, photons, etc. In Kabbalah, everything is built on the units of energy that constantly mix with and contact each other, connect with and detach. As a result, it creates in the observers (us) the sensation of this world.

That’s why mathematics serves as a basis for Kabbalah. On one hand, the word “Sefira” means “to shine”, but on the other hand it can be translated as “to calculate.” So in Kabbalah, as in all other disciplines, everything is built on calculations. It’s impossible to abide without calculations.

Kabbalah uses terminology that seems to be borrowed from psychology, philosophy, and even fairy tales: such as a mysterious transformation with a wave of a magic wand.

In fact, it is just a convenient description of a transformation of certain materials into another, an example of transition between different levels, etc., because such a language is more concise and clear to scientists. However, if it is translated into a mathematical language, one sentence can turn into a big book.

Kabbalah doesn’t relate to the Torah as a regular narration (story). For example, if it says, “Moshe took something and went somewhere…” it denotes a certain energy level at which human sensation rises from one level to another. Changing the properties of a person begins to expand in the description of something really huge.

Sometimes, in order to resolve a small mathematical problem, it is necessary to write a book that presents the problem in a way that the readers understand what the problem is about. The same applies here.

That’s why in Kabbalah the mathematical device is not obvious or clear. Gematria (numeric values of letters and words) is a different story. When an ordinary man reads books that are solely based on the language of Gematria, he won’t understand a thing, just as he cannot understand higher mathematics.
[168198]
From KabTV’s “Kabbalah and Science” 10/7/15

Related Material:
The Measuring Unit Of Bestowal: The Ten Sefirot
Kabbalah – The Science Of The Future
A Kabbalist Is His Own Lab

Terrorism In Israel Is Leading Us To Unity

In the News (svoboda.org): “To carry out attacks in Israel, 13-year-old children are organized through social media networks. The main reason – the Palestinians are desperate due to not being the central focus of the media in the Arab nations.

“All of the Arab nations are in conflicts, with many of them beginning to look at Israel as an ally in their struggle with Iran, paying less and less attention to the Palestinian question that they became fed up with long ago.

“The Palestinian leadership wants to attract attention to itself somehow, since the Palestinian security forces aren’t participating in the campaign of violence against Israel and are cooperating with Israel. And that is how the game continues.

“The position of the United States matches their position. The Secretary of State blames Israel for the Palestinian oppression because Israel is building settlements in the West Bank and is trying to change the status quo on the Temple mount.

“Peace is imperative, but the maximum concessions that Israel is ready to make are far from the minimal demands of the Palestinians. Netanyahu is concerned about the presence of Hezbollah and more, the Iranian army within our borders. This is because Iranian military forces have already entered Syria to fight alongside Assad. Netanyahu has a better relationship with Putin than with Obama, even though there is no doubt that America is still our main ally.”

My Comment: We can rely only upon ourselves. We have no allies. But we have the most powerful weapon in the world, which is our unity, and if we attain it, we are invincible and can lead the whole world to that same state in which the Creator will be revealed.
[168090]

Related Material:
A “Dead” Terrorist Comes To Life
Only Israel Will Save Western Civilization
The Jewish Mind

He Who Is Merciful To The Wicked

In the News (russian-bazaar): “Europe has in fact accepted its fate and doesn’t try to stop the Islamic wave that threatens to drown it. The borders between the European states are like torn down fences. Closing the borders would be considered an act of racism and asking the Muslims to become part of their new homeland will lead to growing xenophobia towards them. When we speak about numbers, probably many thousands are terrorists according to foreign media sources.

“This is the start of the fulfillment of the prophecy of Egyptian cleric Salem Abu El-Puticha: ‘the Islamic nation will return to power despite the West’s arrogance. The West will undoubtedly be destroyed. Allah destroyed the Byzantine and Persian empires and he will also destroy the West through the Muslims. These countries will convert to Islam, Islam will reach them.’

“The Muslims see themselves as those who have the absolute knowledge that enables them to rule the ‘heretics.’ Therefore everything the Arabs conquered in the 7th and 8th centuries belongs to Islam, including Spain, Sicily, the land of Israel and more. This isn’t only the view of the fundamentalists, but also of the level-headed Muslims. The main message of Islam is ‘the Muslims need to believe that Islam will eventually win and will replace the constitution of Sharia.’

“One of the problems of the modern world is the hatred that radical Islam feels towards the West. There is no sustainable solution to this problem. The world prefers to engage more in Israel, thinking that all of the modern world’s problems stem from Israel. Rabi Yohushua Ben Levi said: ‘He who is merciful to the wicked will eventually become wicked to the merciful.'”

My Comment: According to the wisdom of Kabbalah, Islam will flood the whole world except for Israel, and when it swallows the world, it will turn everyone against Israel, but this will be its end. It is impossible to blame Europe of turning a blind eye to the current Islamic wave that is flooding it. Everything evolves according to the plan that is described in the wisdom of Kabbalah. Only the unity of the nation of Israel into one whole will help the world attain its greatest, most sublime future without any bloodshed.
[168035]

Related Material:
Emigrating In The Name Of Allah
Militants Are On Their Way Toward The European Union
Compulsory Unity

News from our friends in San Antonio, Texas:  Our small group in San Antonio participated in the Texas Book Festival. It was a great success. 40,000 people visited the fair. 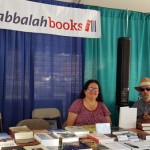 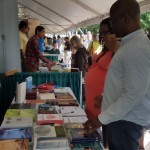 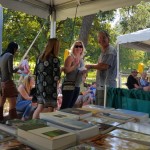 Many people wanted to know about the wisdom of Kabbalah; we sold many books, and gave out over 300 fliers. Charlie Wood, a member of the group, played Kabbalistic music and many people came to our stand to listen to the music, to ask questions about Kabbalah, and to look at and buy our books.

Next to our booth were “The Muslims for Peace.” Their representatives came to us and asked about the wisdom of Kabbalah and took our business card with links to Kabbalah sites.

Some of the people who visited our stand had heard about the wisdom of Kabbalah or had studied from other sources. There were also several professors of theology who took our cards.

We are grateful to the Creator for such a great opportunity.
[168095]

Writings of Rabash, “Rungs of the Ladder,” “The Need for Love of Friends”

Writings of Baal HaSulam, “Preface to the Sulam Commentary,” Item 5