I must trust that the Creator corrects me in everything. Rejoice in His care equally in ascents and descents. So you will experience all the states as ascents. Efforts to be in a descent as if it is an ascent are called stimulation from below, and bring one closer to the Creator when he feels that this is the Creator’s way to draw him near.

Through the group and studies of Kabbalah, one realizes that he has to go above egoism, unconsciously raising the prayer for his fulfillment, MAN. The Creator corrects the ego-MAN and instead of fulfillment gives him the strength to curb the pleasure, fulfillment, the strength to reject egoism, meaning—the screen.
From Twitter, 5/31/19

“Their Voices Will Be Heard”

Spirituality can only be attained in the connection between us. It is not that easy to accept and it is not very pleasant because it is completely against our nature. The further humanity develops from generation to generation, over thousands of years, the more egoistic we become. This can be clearly seen in the transformations of human society, which began with tribal clans, then transformed into villages, which then grew into big cities and countries.

Connection is a very difficult topic, but it defines all the differences between us and the spiritual world. The main problem is our belief that we can connect. But we cannot connect because we are one hundred percent egoistic.

First of all, we must remember that we cannot connect, let alone love one another. This is completely against our nature. Let’s be realistic: we are capable only of hatred. All the rest are just beautiful games, like in kindergarten. Yet, we are inverting this game into a very serious one. Playing like good children and realizing that we are not and that in fact no one loves his friends and does not want to get closer to them, we are hoping for the only remedy—the reforming light.

We do not want to connect, and we clearly understand it. However, if we nevertheless try to connect, then we ask for the force of correction, the reforming light. We are not innocent children, but evil egoists, and we come to the group not to embrace each other, but to attain spirituality. Otherwise life will end in vain. Therefore, all our actions in the group, during workshops and in dissemination, have only one goal—to attract the reforming light. And the light will do all the work.

We do everything we can and the Creator will finish everything the way it should be; He will even correct everything that we have spoiled. The main thing is for us to try and reach a true request. We do not deceive ourselves. We do not want to connect. However, at the same time, we understand that there is no other way. In this global world everything is interconnected: inanimate nature, plants, and animals. Only man, the last degree, falls out of the general symbiosis and acts in an opposite way.

In order to correctly connect with others, we need the force of nature. This force cut us off from the rest of the levels and from each other. Now we must demand this force to reconnect us. Therefore, we try to talk nicely to each other and understand that this is a prayer, a request, that will help us egoists be corrected by this force.

The tens, the groups, and the workshops are very serious work against our animalistic egoism. We do not want to get closer to each other, but there is no choice: humanity must restore nature, which is completely integral and perfectly connected. Only man spoils everything; therefore, we are obliged to connect with each other and all other levels of nature.

I feel that I do not want to connect with anyone, but at the same time, I acknowledge that I must be connected with everyone, and therefore, I demand the reforming light.

It is written that “Israel will not be redeemed by sorrow, nor by bondage, nor out of their wonderings or madness and not through pressures or lack of food.” No heroic efforts in this world can help to attain the meaning of life and achieve eternity, but only “by ten people sitting together” and speaking about unification. They understand that there is no connection between them and according to their own forces cannot be; they ask the force to come and connect them. “Thus, their voices will be heard.”1
From Lesson 2, Latin America Convention 2019 “Building A Future Society” “Day Two” 5/18/19, The Work in the Ten
1 Minute 00:00 – 20:00

Question: How does the concept of joy unfold in Kabbalah? For example, faith is love, bestowal. And the joy?

Answer: Joy comes from the fact that I can perform the action of bestowal. As it is said: “Joy is a reflection of good deeds.”

Recent studies have found a correlation between quality of life and a rich community life. In the center of community connection, a source of energy and happiness is discovered and felt. Community education must begin with family events, games, workshops, and music. It would include meetings and playful exercises that accommodate every population. The goal of every meeting is to build a warm, friendly, secure, pleasurable sense of human connection.
From KabTV’s “New Life #238 – Quality of Life within Community,” 10/8/13

Writings of Baal HaSulam, “Preface to the Wisdom of Kabbalah,” Items 1 – 14

One should believe above reason and imagine that he has merited faith, the sensation of the Creator, of how the Creator governs the world with goodness. When one feels a lack of reason, one must work above reason, as if he already feels reason.
He thus acquires the importance of the goal and receives the vital force—the joy of being close to the Creator.

Conception in the upper world happens when a person annuls himself, like an embryo in a mother, and the upper one corrects him to this extent. Egoism annuls to Bina and has no desires of its own. It means it can be nourished directly, by what the mother, Bina is nourished with. There are no questions, the mouth is closed, and one advances by faith above reason.

Entry into spirituality happens by annulling oneself, love for oneself, Malchut, the will to receive for one’s own sake, and entry into the will to bestow, the quality of Bina. In this state the soul adheres to the Creator once again. This complete self-annulment is called Ibur, conception of the soul in the upper world, in the Creator.

When one disregards work for the Creator, having no energy to do the work other than to receive it from the Creator, in order to accept His rule blindly above egoism, one must rejoice that he has egoism, something to give to the Creator—and prefer this work in a sensation of darkness, above states of light.

Twenty of my students from all over the United States, met this week for a packed day of training. While I was on my way back to Israel, they gathered to work on how to disseminate the message of unity to the divided people of America. 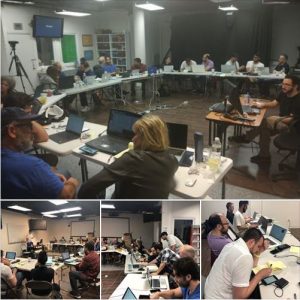 The Jews assimilate into the European society that is moving away from the values of mutual guarantee that constitute the foundation of the people. After 500 years of prosperity in #Spain, a deportation order was signed ordering #Jews to leave Spain. The Jews were shocked.
But one good thing resulted from the #expulsion: the Jews finally gathered in #Israel and the method of connection was discovered in the world.

Between the 9th and 13th centuries, during the thriving of the Jewish Diaspora, Spanish Jewry was at its peak. This was not a positive phenomenon—it is the “Golden Age” of separation. #Antisemitism

It was wonderful to see the unity of friends at the 2019 Convention in South and North America. Hours after the last lesson—never and nowhere before was such inner yearning for unity felt! These impressions are timeless! Thank you!

Progress in spirituality depends on one’s connection with the Creator. The evil inclination is help by resistance, helping to develop the force of attraction. We must therefore respect egoism, realizing that it helps us, like dumbbells for strengthening the muscles.

The Creator deliberately created the evil inclination so people would be able to overcome it and bring it to goodness. He deliberately places obstacles against our unity, and we must look for ways to transform them to goodness.
We should never curse our egoism since it’s the Creator’s force, sent to us in the form of a disturbance.

One who wishes to attain the Creator is depicted as one who besieges a fortress. The main part of it is “Hoots Mi Tse“—anything besides leaving the efforts!
The result will become apparent many years later: the realization that one’s attitude to others is the basis of one’s relationship with the Creator. The heart will soften and accept love for others. Revelation!

From love for the neighbor, one comes to love for the Creator—and in no other way. One who hopes to sidestep others and establish a personal connection with the Creator is wrong. Each of us is a shard of the broken vessel of the soul of Adam Rishon. It’s impossible for an egoistic shard to aspire to the Creator.

Becoming like the Creator means ceasing to think about myself—whether I exist or control anything. All my thoughts are about the Creator, and therefore, about others, bestowal. To become like the Creator, you must help others come closer to the Creator. Detach from yourself, join the ten—and you’ll succeed.
From Twitter, 5/30/19

Expulsion from Spain: A Historic Turning Point in Spreading the Wisdom of Kabbalah

Between the 9th and 13th centuries, during the thriving of the Jewish Diaspora, Spanish Jewry was at its peak. This was not a positive phenomenon – it is the “Golden Age” of separation. The Jews assimilate into the European society that is moving away from the values of mutual guarantee that constitute the foundation of the people.

After 500 years of prosperity in Spain, a deportation order was signed ordering Jews to leave Spain. The Jews were shocked. But one good thing resulted from the expulsion: the Jews finally gathered in Israel and the method of connection was discovered in the world.

Twenty of my students from all over the United States, have met this week for a packed day of training. While I was on my way back to Israel, they gathered to work on how to disseminate the message of unity to the divided people of America.