Stages Of Changes Of The Desire

Question: From the point of view of Kabbalah, creation is the desire to receive. Desire has no place. Therefore, in the Torah, we are talking about the development of the same desire, which is constantly undergoing some kind of transformation.

Question: What does the “flood” that happened later mean?

Answer: These are all stages of awakening of a person to a conscious, clearly directed spiritual work.

The “flood,” “Babylon,” “Canaan,” “Egypt,” “land of Israel”—these are the stages of a gradual change of desire in a person at all degrees inanimate, vegetative, and animate until he comes to the full equivalence of form with the Creator.

Question: Is the land of Israel the final stage?

Related Material:
The Material And The Spiritual Earth
The Land Of Israel On The Map And In The Soul
The Spiritual Roots Of Nations And Peoples

The family is the nest in which a person grows. People who grow up without family support encounter problems throughout their lives. They lack the power that family provides. Modern civilization destroys our connection with family. It is impossible to solve family problems unless we teach people how to reach connection and love between them by overcoming the human ego. All the connections between family members will fall apart until we discover that we need a new quality of connection in general.
[282114]
From KabTV’s “New Life 1306 – Relations In The Extended Family,” 5/9/21

“In One Sentence, What Is True Happiness?” (Quora)

Michael Laitman, On Quora: “In one sentence, what is true happiness?“

Happiness is a state in which the upper light fills us with the sensation of an eternal and perfect existence. 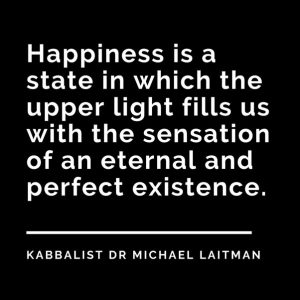 “In One Sentence Only, Why Do You Believe Or Not Believe In God?” (Quora)

Michael Laitman, On Quora: “In one sentence only, why do you believe or not believe in God?“

I don’t believe in God. I have been studying and teaching the wisdom of Kabbalah for over 40 years, which is the method for the revelation of God to every single person in this life, in this world, i.e. “revealing” not “believing.”

See The Torah In Its True Form

Question: “Mountain” in Hebrew is “Har” from the word “Hirhurim”—doubt; “Sinai” is from the word “Sina”—hatred. Does the concept of Mount Sinai symbolize the state of a person who is in doubt?

Answer: Doubts and hatred precede the correct understanding of the Torah. Our generation is in this state.

Question: Does a huge hatred manifest in a person before he unites with other people?

Question: But an ordinary person, reading the Torah, imagines Egypt, Mount Sinai, several hundred thousand people standing at its foot, while we are talking about some kind of internal states, hatred, love?

Answer: Yes, we are talking about the contradiction of a person with what surrounds him.

My Response: You cannot do anything. We left this state three thousand years ago and long ago stopped understanding the Torah as it really is. Today we are studying it like children at school, like some kind of fairy tales. And that is why it happens.

In fact, the Torah is a coded instruction for connecting people. With the right unification between them, a higher power manifests itself, which absorbs and surrounds everyone. It becomes clear to everyone where they exist, to what extent, that this is an eternal, perfect existence, and not some unfortunate, base, earthly one.

Let us hope that we will reach the state when the holiday of receiving the Torah really comes and we will see it in it’s true form.

Once it was given to us, and now every generation and every person must decide for himself whether he is receiving it or not on the terms that were set.
[282295]
From KabTV’s “Spiritual States”

Related Material:
Two Levels Of Interpretation Of The Torah
Everything Is Vanity Of Vanities
The Plague Of The Century

Program With A Good Ending

Question: Is the Creator a good force?

Answer: Regarding creation He is kind. And not regarding creation, we cannot say anything about Him. We speak about Him as about Atzmuto—He by Himself—meaning, acting neither positively or negatively.

My Response: In fact, this fairy tale is kind, and it is not a fairy tale. This is a planned program of creation. Its ending is visible in the spiritual world. When we rise from the degree of our world, from things that are happening in the earthly senses, to a level higher than our perception, to the so-called “Lishma” (“for the sake of others”), then we see the future.

Now we are beginning to understand that the present and the future flow both in the forward and in the reverse direction. Therefore, when we ascend to the upper world, we can clearly see its future states. Kabbalists see this.

Question: Do they see it all in forces and not as it manifests itself in our world?

Answer: Of course. But they see it and tell us about it. Where did they get it from? How could they describe everything? From the fact that they discovered it all.
[282925]
From KabTV’s “Spiritual States”

Related Material:
Endless Pleasure
Why Does The Creator Need Me?
Together Without Any Losses

Question: What does spirituality mean?

Spirituality is the correct connection with the Creator. If it really is correct, it runs through people, and the quality called the Creator is manifested in it.
[283007]
From KabTV’s “Spiritual States”

Question: The Jews had to constantly fight for connection. But why, even if we look at what is written in the Torah, did they first fight with external enemies, and then began to fight against each other and with those Jews who accepted Hellenism?

Answer: All the Jewish wars were between the original representatives of the Jews and those who wanted to break away from this nation and preach other values but also remain part of them.

They wanted to convince the entire nation that the new values that the Hellenes or the Romans carry are correct. Supporters of the observance of true national values rebelled against them. Wars were fought between them.

There were practically no serious wars between Jews and Romans and Jews and Greeks. To a certain degree, they happened later, and more with the Romans than with the Greeks.

The confrontation that consumed the entire country greatly bothered the Romans who did not know what to do with it, and therefore, sent their representatives, governors, up to the point that they were forced to send troops.

Question: It turns out that the conflicts within the nation caused a kind of response from the upper force, which was manifested precisely in the fact that the Greeks and Romans came here and did their job.

If we transfer this to the internal war, then can we say that the “Greeks” are my desires?

Answer: All that a person is made of is his desires. They are all egoistic and are divided into several degrees. One of these degrees is called “Romans,” the other one “Greeks,” and so on.

If you, as a Jew, do not cope with them, then you become under their control and enter a state of war. You are forced to destroy them, and they destroy you until you get a certain result from these clashes.

That is, those wars that you cannot fight internally within yourself, ideologically, you will have to fight outside of yourself, physically.
[282931]
From KabTV’s “Spiritual States” 5/14/21

Related Material:
The Jewish War
Internal Wars At The External Level
Is The War Against Terrorists Or Concealment?

Filed under: Israel, Israel Today, Nations of the World, Spiritual Work - No Comments →

Comment: In all Kabbalistic sources, two forces are always considered, for example, Haman and Mordecai, Moses and Pharaoh, etc.

My Response: There is nothing else in nature but plus and a minus.

Question: In principle, can we describe this simply in terms of the interaction of two forces?

Answer: No, you cannot describe it as two physical forces. Between them there are many possible actions, conditions that cannot be revealed, and therefore they cannot be described in any other way than allegorically, in the images of our world. You cannot take plus and a minus and say, “This is how they approach each other, this is how they move away…”

Therefore, Kabbalah uses the language of our world to explain all the problems of our correction to people. When a person begins to correct himself, he feels these qualities, but try to ask him: “What do you feel?”—he has nothing to say. It is because he feels the forces and can only explain them in their embodiment in our world. This is the problem.

The main thing is that we go through this, feel this, and achieve this.
[283158]
From KabTV’s “Spiritual States”

Related Material:
Two Forces, Emanating From The Creator
Unifying The Two Forces Of Nature Within
A Mutual Connection Between Two Forces