Question: Sometimes you say that the people of Israel is an intention straight to the Creator and sometimes that it is a desire to give.

This is also how we call the Temple that was built in Jerusalem, Beit HaMikdash, that is, a vessel of holiness, the desire to bestow. Are they all different levels of desire?

Answer: These are different levels of desire. Just as you have all kinds of desires for something bad or good, it does not matter, but they are on different levels, so is this. Only the desires to bestow include the correct attitude to all five levels of nature: inanimate, vegetative, animate, man, and the Creator.
[283256]
From KabTV’s “Spiritual States” 5/21/21

Filed under: Israel, Nations of the World, Spiritual Work - No Comments →

When Good And Evil Merge Together

Question: What is this commandment to drink wine on Purim to such a state that you do not distinguish Haman the robber from the pure quality of Mordechai?

Answer: At the end of correction we get so much light (symbolized by wine) that we are not able to determine where the evil is and where the good is because there is no longer any difference between them. They are combined into one single attainment of the upper root from which both plus and minus emanate. There is practically nothing there, only a kind attitude toward us.

A person acquires the ability to see all kinds of evil and good events as one. Even today Kabbalah advises us to treat everything in the same way: There is only “The Good Who does good” in everything, “There is None Else Besides Him.”

When we treat everything as good coming from the Creator, then we move closer to Him every time.

Question: A person who reaches the state of correction can internally justify anything, even the most terrible incidents?

Answer: He must justify them because it all comes from the Creator, and there is nothing that does not come from Him. And He is absolute kindness.

If we do not understand this and cannot justify it, then this only means our lack of correction.
[283040]
From KabTV’s “Spiritual States”

Feel The Book Of Zohar

Comment: Ancient scholars said that there is a positive force in The Book of Zohar that can correct us and bring us to the best possible state. You are helping us feel this book a little so that the power contained in it will affect us in a positive way.

My Response: The value of The Book of Zohar is not explaining its content because you still cannot understand how the upper world works until you at least somewhat feel it.

We read it only for the sake of attracting the upper light that can correct you, raise you to the level of the upper world, and you will feel it all there. Just like in our world: Is it possible to explain to a one-year-old baby things that only a ten-year-old child can see and understand? So, you have to develop him to the level of a ten-year-old child, and when he grows up, you can explain what it is that he sees.

But until a person develops, this book will still remain a mystery to him. He can read it for a hundred years, and for a hundred years he will not understand anything. Maybe he will begin to imagine something, but it is still not what it really is.

Therefore, you must expect every moment that The Book of Zohar will work on you and develop you. After all, if in our world a one-year-old child is given educational games, he keeps engaging in them, and his body is automatically growing, then in the spiritual world, we must evoke our growth at every moment or we will not grow up.
[282276]
From KabTV’s “The Power of The Book of Zohar” #14

“The Future Of Israelis Living In The US” (Linkedin) 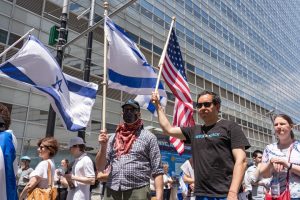 Indeed, the situation of American Jewry is becoming increasingly uncomfortable. The same goes for Israelis living there, if not more so. Because Israelis still feel connected to Israel, either through family ties or because it is where they grew up, they cannot cut it off from their system altogether. However, by and large, Israelis living in America want the least connection they can have with Israel and with Judaism. This may be a conscious or unconscious state of mind, but this is where the majority of Israeli Jews living in the US stand.

There is a very interesting process happening here. A new reality is forming, and as always, the Jews are at the heart of it. The world is becoming increasingly interconnected and interdependent. The Covid-19 pandemic is just one example of it. Another example is the recent global spike in prices of transportation, staple foods, and utilities. Evidently, we have entered a phase in the evolution of humanity where what affects one part of humanity affects all parts of it.

If we want to resolve today’s crises, we have to think in terms of what’s good for humanity rather than what’s good for me, my city, or my country. Whether we like it or not, mutual responsibility is the call of the hour, and Jews, as the ones who first conceived this notion, are expected to lead it even if no one is verbally expressing this request. Jews are not requested to take over the world, but rather lead by example: We need to show that we are responsible for one another, and the rest of the world will learn from our example, just as it did in the days of the second Temple when non-Jews would come to Jerusalem to witness the unity of the Jews during the festivals of pilgrimage.

According to the book Sifrey Devarim (Item 354), “Nations and kings would say, ‘Since we have troubled ourselves and came, let us see the merchandise of the Jews.’ They would go to Jerusalem and see the Jews eating together and praying together, and since among the nations, the God of one is not the God of another, and one’s food is not another’s food, they would say, ‘It is befitting to cling only to this nation.’”

In his essay “About the Laws and Their Details,” philosopher Philo of Alexandria offered a beautiful depiction of the unity of the Jews that was so appealing to the nations: “Thousands of people from thousands of cities—some by land and some by sea, from the east and from the west, from the north and from the south—would come each festival to the Temple as if to a common shelter, a safe haven protected from the storms of life. …With hearts filled with good hopes … they made friendships with people they had not met before, and in the merging of the hearts … they would find the ultimate proof of unity.”

These days, Israeli Jews are standing up to defend Israel, but I don’t feel that it is done for the right reasons. Unity should not be a step Jews take in response to antisemitism; it should be the step Jews take in order to prevent antisemitism altogether, at first, and ultimately because by this they are serving as a role model, just as our ancestors did in antiquity, before we gave in to unfounded hatred among us.

I am not optimistic that Israeli Jews in America will accept what I am writing here, but perhaps in a few years, when the pressure on them mounts, they will find them pertinent. In the past, we did not unite in the face of antisemitism, or if we did, we did too late. I hope that this time, we will be more attentive to the message and will wake up to the call for unity before another heartbreak lands on our nation.

We cannot defeat our enemies with arms, but only with our spirit. When we raise our connection to the level of mutual responsibility and solidarity, we will deter all the negative forces, and even our enemies will become our friends.

For more on this topic, refer to the books Like a Bundle of Reeds: Why unity and mutual guarantee are today’s call of the hour, and The Jewish Choice: Unity or Anti-Semitism, Historical facts on anti-Semitism as a reflection of Jewish social discord.