Slave labor is a constant opposition to the recurring thoughts against unity and bestowal, along with feelings of bitterness and death in egoism (Maror), thoughts aiming to keep a person in slavery to egoism, which must constantly be resisted. Until a prayer for freedom arises…
#Passover

When you cannot do anything alone, even beg the Creator for help, all you can do then is rely on the group’s help: you must annul yourself to the group completely, without all of your thoughts and feelings—and will receive a new spiritual state from the group!

If while on the path you feel completely indifferent to coming closer to the Creator and you cannot pull yourself out of this state of exile, as if you are in a state of being unaware of the Creator, not sensing the separation—all you can do is pray to feel the separation—this will bring you back to life…

To the extent of understanding that closeness with the Creator occurs in the measure of similarity to Him, bestowing to Him and taking nothing for oneself in order to please Him—one must acquire the quality of bestowal, faith in the greatness of the Creator, annulling oneself, and starting to realize the need for descents to appreciate the ascents.

The Creator’s concealment is necessary for the soul’s development. Sensations of pain, separation, confusion, concealment, grudges against the Creator—it is forbidden to take offense and curse the Creator for this.
One must believe, in spite of this, that these are sensations inside of egoism and are for our sake. Because the Creator could have eliminated negative thoughts and feelings…

The need for our development by faith above reason, bestowal, is for our desires to become unlimited and be able to attain adhesion with the Creator. In desires that are restricted by egoism, we cannot become even an embryo, included in the Creator, and we certainly cannot attain full adhesion – equivalence with the Creator.

The Tree of Knowledge is a demand to reveal the Creator in the ego, knowledge, rather than in bestowal – faith. But its fruits are forbidden. Yet if the Creator’s attainment happened in the open, in knowledge – egoism, everyone would be Kabbalists, carrying out the Creator’s desires.
But the problem lies in restricting attainments in knowledge…

A person is ready to go toward bestowal but sees that he involuntarily continues on the egoistic path. After reaching despair many times, he is ready to leave the path. He cannot go by faith – bestowal, above – against knowledge, in spite of the states.
But if he doesn’t leave the path, like a chained slave, the efforts accumulate and he comes out to freedom.

Law: in a state of ascent, when feeling the Creator’s greatness, we annul to Him without any reason, in complete agreement. But we cannot enjoy adhesion with Him and the fact that He brought us closer to Him.
Hence we need rejections, in order to appreciate the closeness, to find life and pleasure in them.

#Abraham: how does one attain the upper world, the quality of bestowal?
Creator: through exile into the world of egoism, opposite to it.
There one acquires the will to bestow to the Creator and asks for the Light that Reforms.
One takes egoistic desires from Egypt and receives altruistic intentions from the Creator.
#passover

One who wishes to act by the Creator’s greatness, correcting himself to attain equivalence to the Creator, needs His increased greatness. The greatness is given by the Creator to bring the person closer, while the person himself can only act egoistically.
Hence annulling yourself is salvation from exile, and it is done by the Creator!

Going by reason means being in the sin of the Tree of Knowledge. This is revealed as difficulty of going against reason and the question of why should I even bestow to the Creator instead of myself?
#Rabash, Why Do We Ask the 4 Questions Precisely on #Passover Eve?

Concealment is necessary so we can receive from the Creator without shame. But it is only possible when receiving for the sake of the Creator, of bestowal.
Kabbalah (Torat Emet – the true Torah) is given so we can rise above egoism, which separates us from the Creator, and achieve similarity to Him, giving while receiving.

All the efforts to come out of #egoism: what for, why? For ourselves—are egoistic. For the Creator, so one must increase the importance of the Creator so that all the efforts would be for His sake—this is what takes us out of exile.

All the spiritual work is in the prayer (MAN). To do so, the effort (work) must be against the ego, free of its power. Realizing that one cannot leave the power of egoism through his own efforts, the desire to give to the Creator is born, the futility of it is realized, and the prayer is born.

All the suffering of exile in egoism (Egypt) was from the feeling of inability to leave the power of egoism (Pharaoh) to freedom, to be in the intention to do everything for the sake of the Creator. So, in exile, the true desire (Kli) was revealed—prayer for the Creator’s help.

It is in the ascent, the exit from slavery to egoism that one tastes the Maror (bitter greens), because especially in the ascent can one taste the bitterness—the taste of the fall.
After all, light comes out of darkness.
It turns out that bitterness is sweetened with an ascent. Light is enhanced by darkness—this is the correction of darkness.
#Passover

Until egoism has been fully revealed, it cannot be eradicated—it’s impossible to receive the force to eradicate it from above. Hence all efforts against egoism reveal it even more—until the entire force of egoism is revealed and the full desire to erase it—then the Creator destroys it!

In the beginning of exile we feel egoism’s rule, followed by the impossibility of coming out of it. We discern the meaning of bestowing “not for your own sake.” Although one wishes to act for the Creator’s sake, he sees that he cannot, but justifies his lack of intention, and does not feel very distant from the Creator. This is the beginning…
From Twitter, 4/19/19

Wishing you all a Happy Passover!

Please share the infographic and see a more detailed explanation of the meaning of Passover here: >>>>>>>>>>>>>> 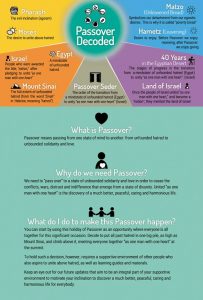 We love you as you are”, “Look at the others and see how successful they are,” “You have nothing to fear, go for it”—what advice is right and what is harmful? Eight phrases we use, and the correct position of the wisdom of Kabbalah towards them.

Question: Should we constantly cultivate the importance of the principle “There is none else besides Him”?

Answer: If the friends in the group think about how none of them should forget to identify the Creator as a root cause of their states, then you will really help each other.

This stage is called mutual guarantee; it begins from the fact that we simply mechanically want to help each other keep ourselves in the thought that “There is none else besides Him.” At the same time, each of us thinks about the other.

When we all think this way about each other together, we “turn on” the mutual guarantee and it works. In this case, each member of the group remembers more often that the Creator is the source of his or her thoughts and feelings, and they begin to form, to connect with each other into one network.

By constantly helping the friends remember that we are mutually included into each other and connected to the Creator, we try to identify the Creator as our common source. Each of us then becomes connected with others in such a way that the signal from the Creator passes through each one to everyone else. This is another level of connection.
[243008]
From the Kabbalah Lesson in Russian 2/11/19

Related Material:
To Tango With The Creator
Forward, Toward Concealment
The Protective Shield Of The Concealment

The Source Of All The Forces Of Nature

Question: Who is the Creator?

Answer: The Creator is the upper force that includes in itself all the other forces of the world.

Question: It is written in the original sources: “It is impossible to understand the Creator without having experienced Him.” Is this right?

When we feel something in them, it all assembles into a precise system and all our sciences originate from it. In addition, we complement our senses with tools that expand the range of our natural sensory organs: binoculars, microscopes, telescopes, etc.

However, there are forces in the universe that our senses do not perceive. The science of Kabbalah lets us develop an additional organ of sensation that includes the same five senses, but on a different level.

Exploring their nature, we reveal their common source, called “the Creator,” and begin to attain how they affect us, how they determine all conditions, forces, and circumstances in which we exist. Then, we already study the system of forces that determines our life.

So begins the conscious existence of man, when we already know what has been, what will be, why it has been and why it will be, whether we can change something in the future, etc. That is, life becomes not only conscious, but also manageable. This is the subject and the purpose of the science of Kabbalah.
[243407]
From KabTV’s “The Essence of the Science of Kabbalah, Part 3” 11/12/18

Filed under: Perception, The Creator - No Comments →

What is jealousy and sibling rivalry, and how do we teach children through games and workshops to use such qualities to create a relationship in which personal satisfaction and mutual giving exist? Jealousy between siblings is natural and can help children develop. We educate children by giving them an artificial system of behavior in which to build a second nature. Children can be rewarded for efforts to connect and be considerate.
[123595]
From KabTV’s “New Life #215 – Sibling Relationships, Part 2” 7/25/13