#Zohar Vaera 205: And then the Creator will rise up against them and will sweep up the ends of the world and will drive the sons of Ishmael out of the land, and will crush all the forces above, and no forces will remain above against the eternal nation, #Israel, besides the one single force of #Israel.
#Zohar

Zohar Vaera 205: At this time one nation will awaken from the end of the world against sinful Rome and will fight a war with it for 3 months. And nations will gather there and fall captive to them. Until all the sons of Edom will assemble against it from all ends of the world.

#Zohar Vaera 481: And then an assembly of exiles will gather, the sons of #Ishmael—the right line, and Rome—the left line, with all the nations, will awaken and wage war against #Israel. But He who Sits in the heavens scoffs at them…

At this time the king Mashiach will awaken the whole world, will assemble many nations and the sons of #Israel will assemble in their places.
#quote

#Zohar Vaera 480: In the year 73, after the revelation of the Mashiach ben Yosef, the kings of the world will assemble in Rome, the Creator will send fire upon them and all will perish. Those who did not go to Rome will wage war once again.

Inanimate nature: Dependent. Fully controlled by the Creator through the desire to enjoy. Working only for itself, it fulfills the Creator’s direct instructions, which is how He made it. It does not even realize that it is under full control of the Creator.

Vegetative nature: A little independent: bestowing a little, against the Creator’s direct desire. But everyone has one movement.
In spiritual development, there’re those who have power to resist egoism, to work in bestowal, but don’t yet have the power to resist the environment.

Animal nature: Everyone with his own nature, his own life, not dependent on the environment, feeling his own sensations, capable of bestowing against the Creator’s desire but unable to feel anything but himself, his own time, has no sense of others and thus cannot worry about them.

Worlds don’t exist relative to themselves. There’s only 4 phases of direct light emanating from the Creator, HaVaYaH. But as soon as the creature’s reaction appears to complete the Creator, the entire system of worlds immediately manifests in relation to the person attaining them.

#Zohar Vaera 204: And the sons of #Ishmael will have to incite great #wars in the world. And the sons of Edom will assemble against them and will fight a war with them: one in the sea, another on land, and one more near Jerusalem. And these will rule over those but the holy land will not be handed over to the sons of Edom.
#Zohar #quote #Israel

The land trembled beneath the maid who inherits the mistress—this is Agar, who gave birth to Ishmael, who brought misery upon #Israel, ruled over them, tormented and persecuted them. He rules over them to this day. There is no exile for Israel as harsh as Ishmael’s exile.
#Zohar, Shmot 289

The Creator’s goal is to delight the creatures by elevating them to His degree of eternity and perfection. Just as the Creator doesn’t think about Himself, so man shouldn’t think about himself at all.
This is the condition of the first restriction, Tzimtzum Aleph, the transition to faith above reason, LISHMA. After that he enters actions of bestowal.

In our time the crudest souls are descending into our world, which therefore couldn’t’ be corrected in previous generations. But they are the ones that complete the correction of the common soul of ADAM and elicit the complete upper light with their base desires.

#NATO was created as a collective defense from the attack of #Soviet #Russia. But today it turns out that the reason for the opposition lies in the character of the Russian people to conquer others, to grow through other #nations. Therefore, NATO continues to be necessary …
From Twitter, 4/7/19

What Influence Do Kabbalah Conventions Have On The World?

Question: Next month, we will be holding major conventions in North America and Latin America. What influence will these conventions, and the conventions we hold in general, have on the world?

Answer: We cannot openly show the world the influence we have. However, we need to first and foremost trust what the Kabbalists write, that we hold great influence. We also need to see how the pace of the world’s development depends on our influence. The fact that the nations of the world blame the Jews for the world’s problems, although it appears as if they point out issues such as the Jews’ disproportionate influence in finance and hi-tech, the deeper reason for their complaints is due to our need to bring the world to a harmonious spiritual state.

We have the ability to attract the world to spirituality. As the world rapidly changes, with very fast progress in society and technology, I hope that we will be able to explain to the world what form it needs to acquire. According to Baal HaSulam, in the Shamati article “Still, Vegetative, Animate and Speaking,” we learn that the entirety of creation is at the still level, that is, it doesn’t move by itself, but it is moved by nature. Also, as Baal HaSulam explains in his article “The Peace,” Nature (HaTeva) and God (Elokim), that is, the upper force, are one and the same. Therefore, we are made of the force of creation, which is called “I created the evil inclination.” If we oppose that evil inclination, then we acquire the force of bestowal and perform acts of bestowal, which are against the Creator’s acts, which is called “My sons defeated Me.” That is the vegetative force. With that vegetative force, we exit to the upper world, not as the Creator created us, outside of Himself, but we return to Him, and we can then bestow on and influence the world. That is what we need to do.

In bestowal, there are vegetative, animate and human levels, where the entire motion of these levels is in the extent to which we can bestow to the environment, and through it, to the Creator. In the vegetative level, in spirituality as with the vegetative level in our world, it still depends on time and place. Likewise, the animate level, like in our world, is independent from time and place, because it has its own time. It lives and dies, and it also has its own individual motion. In spirituality, such individual motion is spiritual development. However, the still, vegetative and animate are all connected to the environment. The final human level, however, is detached from the environment, rising above all the other levels.

We thus need to see that our whole development is in the construction of the correct environment, through which we can exit our initial nature. By drawing ourselves upward from the still form, which the Creator created, we attract humanity after us, whether they want it or not, because they are at the still level.

We thus place a lot of importance and emphasis on our conventions so that as many people as possible will participate. In addition to accelerating the world’s development to a positive and harmonious state, our conventions also provide an opportunity to advance individually in a positive way.

In short, the more participants, the more we draw the positive force of development, and thus the more we can advance humanity to a harmonious state in a positive way. 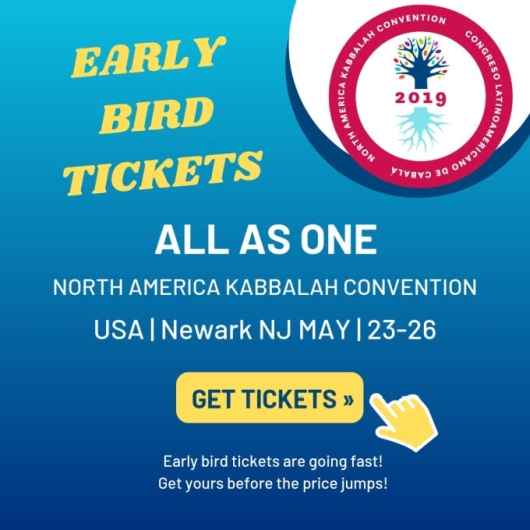 Not Emptiness But Fulfillment

Question: Suppose I am bestowing for the sake of the Creator, but later I feel exhausted. Since the stage of bestowal is called the phase of Bina, does it mean that I am now in this phase?

Answer: No! If you were really bestowing, you would not feel emptiness, but rather fulfillment.

To the extent that you open your valve and begin to vent egoism from yourself, which means bestowing, you leave an empty space within you that is immediately filled with the upper light.

You are like a balloon filled with egoism. When the valve opens, egoism begins to come out slowly and the upper light comes to take its place: Nefesh, Ruach, and Neshama depending on the level of intensity. But you cannot feel exhausted. On the contrary, you feel how much you acquired, received, and were filled with.
[243011]
From the Daily Kabbalah lesson in Russian, 11/25/18

Related Material:
The Secret Of Spiritual Pleasure
Fulfillment From The Feeling Of Love
The Right Investment

Question: How can I make sure that suffering  is pushing me toward spiritual work and not toward escaping them?

Answer: The fact of the matter is that there is useful suffering that directs us toward the goal of creation and there is suffering that we just experience, which brings no benefit.

Useful suffering forces us to be immersed in the group more, to be united with it, to help build ourselves. Just like when we drive somewhere and get lost, that we went the wrong way, the suffering from this helps us find the right way. Without such jolts, we cannot move correctly. We always move according to the two lines: right and left, pleasure and suffering.

Therefore, the suffering that pushes us forward and always indicates how to move correctly is the right suffering.

For example, in a tracking system, a moving rocket constantly adjusts itself. We too must always monitor our path and adjust ourselves according to the negative feedback that constantly corrects and keeps us on course. Such connection is necessary and should not be perceived as suffering but as a necessary correction. Thank the Creator for giving us this education.
[242490]
From the Kabbalah Lesson in Russian 11/18/18

Related Material:
Be Thankful For Suffering?
The Devious Sweetness Of Pain
Is Thanking For the Suffering Greater Than For the Good?

The Structure Of Spiritual Desire

The upper light, which spreads through the four phases of direct light, forms nine Sefirot: Keter, Hochma, Bina, and Zeir Anpin, which in turn consists of six Sefirot. Passing through them, the light builds the fifth stage—Malchut.

Thus, their connection arises on the conjugation of Malchut with the nine Sefirot.

At the same time, all nine Sefirot begin to shine. The word “Sefira” comes from the word “shine.”

Answer: Yes. Malchut itself does nothing; it is an absolutely black body.

Question: How do properties differ from desires—the nine Sefirot from Malchut?

Related Material:
The Ten Sefirot – The Foundation Of The Creation
What Is A Spiritual Vessel (Desire)?
What Is a Desire?

New Life #192 – The Foundation Of Education In Jewish Culture, Part 2

Building an environment that will support the values toward which we want our children to be drawn is of primary importance. When a person learns alone, his ego educates him. When we learn in a small group, we become like one, strong, intelligent, sensitive, inclusive network of consideration and love. Integral education in a group imparts global wisdom, the wisdom of connection. The goal of this type of education is to bring each person to feel that the whole world belongs to him so that he will relate to the world as he does to himself. All children will be as one but the uniqueness of each child will be maintained. This produces tremendous wealth. The child will always succeed, knowing who he is, what he is about, and why he is alive. The map of life will be opened before him.
[146534]
From KabTV’s “New Life #192 – The Foundation of Education in Jewish Culture, Part 2,” 6/2/13

Lesson on the Topic “Questions and Answers with Dr. Michael Laitman”