If I see that the rising #Antisemitism in the U.S. is correcting the #Jews of America, that they begin to move from the #Democratic side to the #Republican side, then we truly have hope to get through all these states in a relatively positive manner.
#DemocraticParty #RepublicanParty #Trump

It is precisely when you feel that a new egoistic force surfaces that you have a chance to turn to the Creator with a request to correct this force, to change its usage to goodness and bestowal, believing that you thereby give the Creator joy.

To come to need the Creator’s help, you have to start fighting egoism on your own, and only after being convinced that you are incapable, will you involuntarily turn to the Creator with a genuine plea for help.
The Creator deliberately doesn’t allow people to conquer egoism so they will come to need Him.

#Passover—after realizing one’s egoism as evil, it’s the holiday of redemption from egoism’s slavery and then exodus to reception of #Torah—the force that corrects egoism, followed by correction of egoism, attainment of the general rule of the Torah “Love another as yourself,” full correction.

The holiday issue of the newspaper The Nation writes about:
– how to celebrate #Passover according to the science of Kabbalah
– the role #women played in the #exodus from Egypt
– the first order of business for the elected Prime-Minister of #Israel
– and much more…
See the Hebrew paper: 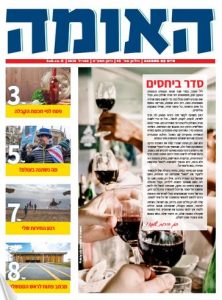 Only when a person despairs in his own forces and attempts to reveal the Creator does he turn to Him for help, with a genuine plea of a broken heart. Hence one must care about realizing the Creator’s greatness and his own weakness, this will accelerate the realization of one’s insignificance and the genuine request.

Two forces have been prepared to develop us to the mandatory upper state of equivalence with the Creator:
One is unconscious —slow yet unrelenting pressure that compels us to change from good to evil;
One is conscious—with our participation, the same development happens …
consciously, willingly, quickly.
The choice is ours.

Man has just one desire that is unlike those of animals—the aspiration to the Creator. Hence only by realizing this aspiration should a person see his actualization as a human being, for all his other actions come from his animate degree.

Egoism’s power (exile, Pharaoh), which is revealed in proper study, can be overcome only with a cry for help to the Creator. The Creator sends a “holy soul” for each request—a will to bestow, love, unite. These parts unite and are felt as ascent in bestowal.

Don’t say that proper study doesn’t help or lead you to the goal.
For it shows you how lazy and egoistic you are, how much your qualities separate you from the Creator, and that overall—you’re the worst one of all!
This creates the conditions for prayer in you—to ask the Creator for correction.
From Twitter, 4/14/19

The Power Over The Spiritual State

Question: What are the degrees of power over the heart and over spiritual states?

Answer: The power over the spiritual state lies in domination over egoism, since it separates us from the spiritual one. It is possible to master egoism only with the help of the upper light. It does not depend on our willpower, strength of our character, or the stern vows that we take upon ourselves.

It all depends on how much a person includes himself in the group and can dissolve in it. In this measure, he will more correspond to the higher light, the property of the Creator, and will gradually become closer to Him.

The Creator is not always in hiding. I can reveal Him at some stage, and He will immediately disappear so that I can go further and focus even more on Him. Suppose I caught Him with my new, more corrected properties, and He disappears again so that I again focus on Him with my kinder properties, which I develop in even greater conjugation with the group, and so on.

If I am a part the ten, we should make such mutual intersections with each other so that a uniform field appears between us. 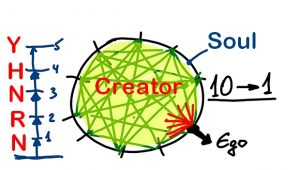 When we strive to create this field, the Creator appears within it. That is, the Creator is the result of the desire of the ten to be as one. This is the main condition.
[242581]
From the Kabbalah Lesson in Russian, 12/9/18

Question: If I am complete egoism, in what can I become similar to the upper force?

Answer: It is possible to become similar to the upper force only if you strive for a balance between two forces: egoism and altruism. The force that naturally arises in you is your egoism and it seems to you that it is you. But it is not you, it is also the Creator.

You are something absolutely neutral, like a slightly frozen jelly, in which constantly without interruption, egoistic power is stirred from birth to death, and it seems to a person that it is him.

However, he is given the opportunity to balance this negative force with a positive one, which he must independently ask of the Creator. This is exactly how he gets closer to the Creator and unites with Him. He asks the Creator to teach him to be in balance with the positive force so two opposing forces appear and balance, called the middle line, emerges between them.

This middle line, which arises in the balance between the right (altruistic) and the left (egoistic) lines, is called Adam (human) because exactly in it he becomes similar to the Creator.

By having a good command of both egoism and altruism, a person can interact with them correctly, constantly balancing up and down and rising on this balance. The main thing is that he learns to maintain balance. This is our work.
[241819]
From the Daily Kabbalah lesson in Russian, 12/16/18

Related Material:
Between The Desires Of The Heart And The Arguments Of The Mind
Harmony Is A Balance Of Contradictions
The Neutral Zone

Question: What is the new year for a Kabbalist?

Answer: A new year is a new venture. “Year” in Hebrew is “Shana,” from the word “Leshanen” (repetition).

The repetition of the four seasons that change by one revolution of the Earth around the Sun and other calendar cycles are based on the ten Sefirot of the spiritual Partzuf and their division.

The division into 6 parts of ZA (Zeir Anpin) multiplied by 10 equals 60. Therefore, there are 60 seconds in a minute and 60 minutes in an hour.

Everything is built on the correspondence between the phases of the Sun, the Moon, the Earth, and their mutual changes.

A calendar is a schedule of our life. Measuring only by the Sun or by the Moon does not reflect all the features of our existence, its framework, and does not clearly graph our life. Therefore, while the Christian calendar is built on the solar cycle and the Muslim calendar on the lunar cycle, the Jewish calendar is based on the Sun, Moon, and the Earth’s rotation.

Three types of calendars correspond to the three lines: left, right, and middle. The left line is the Christian calendar, the right line is Muslim, and the middle line is the Jewish calendar, which includes the Sun, Moon, and Earth.

Therefore, the Jewish calendar is the most accurate. It was calculated thousands of years ago in ancient Babylon and then tested and confirmed 2,200 years ago by Rabbi Yehuda Ha-Nasi. It hasn’t changed since then.

That is, Jewish holidays never move to the summer or the winter like they wander with the Muslims. There are also no problems with the years, like with Christians. In the Jewish calendar, the middle line is maintained, which is always stable.

Thus, everything happens according to the division into ten Sefirot: Keter, Hochma, Bina, Zeir Anpin, and Malchut. This is the way the correspondence between the planets is arranged in nature, and it works.
[243026]
From the Daily Kabbalah lesson in Russian, 12/30/18

Filed under: Holidays, Structure of the Universe - No Comments →

The role of the parent is in setting boundaries for the child and helping them develop their own limits. In order to teach the child, the parent must speak constantly, in the presence of the child, that is, to describe aloud what he thinks, feels, and does. The child thus perceives the parent’s attitude to everything in life, and learns to know the limits himself. There is a time and a place for the parent to be firm and serious while always maintaining a sense of togetherness and friendship.
[121396]
From KabTV’s “New Life #209 – Parenting Teenagers, Part 2,” 7/12/13

Lesson on the Topic “Pesach (Passover)”