Boris Johnson, The “Trump of Britain”

Boris Johnson, the “Trump of Britain”, has good news for Israel.

After Theresa May resigned because she was unable to implement Brexit, Boris Johnson was elected British Prime Minister. In his victory speech a week ago, Johnson reiterated his motto: “Deliver Brexit, unite the country, and defeat [opposition Labour leader] Jeremy Corbyn”.

If the EU had united Europe properly, the entire continent would have been a huge success. But unfortunately, the EU only served as a cover for the banks’ and industry’s economic union to make the rich even more wealthy. It is therefore no wonder that the British and other peoples in the EU are pressing their governments to disassociate themselves from it, and dismantle the agreement. If following the British people, other nations will fulfill their desire to disengage from the union, and it falls apart, the change will only be for the better.

Such a move would also be good news for Israel. The EU is dangerous to Israel because of the power of the agreement to impose economic sanctions on Israel, as part of a growing anti-Semitic spirit in Europe. Therefore, as our sages said: “Scattering the wicked – good for them and good for the world.”

In addition to Brexit and the economic aspect, if the UK wants to improve its social situation, it will also have to stop the influx of immigrants that’s changing the face of the country, preventing it from maintaining its national identity. The veteran citizens, most of whom voted for Brexit, understand that their country is slipping away. Such a move would set an example for both Europe and the world. In other words, the UK would be known as a country that had managed to take care of its citizens, and main strength and firmness.

Back to Boris. Unlike the character that the fake news is trying to portray, he is far from a clown politician. Boris Johnson, like Trump, is a pragmatic person. He is highly educated and with considerable political experience. Typically, the media’s agenda is to portray Johnson and Trump as extremist figures who lack judgement, so as to weaken their status and alter the public’s stance towards them.

The media does not like politicians who operate from independent thinking, and certainly not those who do not flow the dictates of those who own the media. Therefore, Trump and Johnson pose a threat to the hegemony of the media in controlling public opinion. Both, in contrast to the way they are presented, are very direct and do not play the political correctness game that the media has dictated for years.

I hope that Trump and Johnson will find common ground, strengthen each other, and bring with them a spirit of change. Not just for Europe, but for the world as well. And of course, high level politicians who are supportive of Israel, are only giving us an opportunity to realize our role for the benefit of the world. 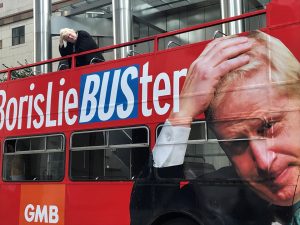 Every person’s aim is to become a transmitter of light. That’s how the world becomes united. Every person will be a pipeline transmitting light. The intention to bestow opens up the path to the light. To this degree, one who transmits is connected to the Creator. The right connection with the light’s filling is called a soul.

A Kabbalist is surrounded by billions of people. He feels light, the Creator, flowing through him. He is a conduit, connecting the Creator to every person, even though they do not feel it. A Kabbalist enjoys being the Creator’s conduit—this is his reward.

The only thing you can do is connect others to the Creator, ask for them, transmit the upper light to them, fulfill them. Therein lies the entire essence of Kabbalah—the wisdom of reception. Therefore the wisdom of Kabbalah is a wisdom about reception. “Kabbalah” is from the word “to receive.” But not for one’s own sake, and that means—to fulfill.
From Twitter, 7/31/19

A person does not receive fulfillment from the love itself but from the longing for love, from yearning for the one he loves. He is happy that he is experiencing these feelings without receiving egoistic fulfillment.

Therefore, spiritual action is performed through faith above reason, for the sake of bestowal. This is a different kind of Kli. It is the yearning that fulfills a person; it is the main thing, and therefore, it is necessary to grow it.

The same rule applies in our world: as long as we are yearning for the goal, it fulfills us much more than its achievement and the realization of our dream. Then we see that it turned out to be not what we imagined. But why is it so?

It is because, in fact, the nature of desires and fulfillments does not work in such a way. True and constant fulfillment is only possible from the yearning, not from the fulfillment of the desire. The will to receive was not created in order to be filled, but rather in order to develop above it the longing for love and bestowal.1
From the 1st part of the Daily Kabbalah Lesson 7/3/19, Deficiency For The Greatness of the Creator
1 Minute 16:55

How To Become Immortal?

Question from Facebook: You say that a person can be immortal and he does not have to die to see the Creator. But man is material, and as long as he lives, this cannot be. For this to happen, we need to leave our body and join the Creator with our soul.

How can this happen if you say that dying is not necessary?

Answer: The fact is that the human body has nothing to do with the sensations of our world. It is purely an external appearance and nothing else. Therefore, it seems to us that we feel the material world through the five bodily sense organs.

In order to experience the upper world, we need to develop five spiritual senses. The wisdom of Kabbalah deals with their development and explaining how a person can begin to sense the spiritual world. So dying is unnecessary.

Question: Do you promise people immortality if we unite and develop our spirit?

Answer: Undoubtedly! This is not a promise, but a spiritual technique, and it is in fact realizable. Today, even in our world, you can meet people who have come to the attainment of the upper world and perceive the world as eternal, immortal through this method.
[249538]
From KabTV’s “Answers to questions from Facebook,” 3/10/19

Related Material:
How To Become Immortal
The Secret Of The Passage To Eternal Life
Mortal World And The Eternal Soul

How Are Jewish People Able To Obtain Such High Positions In Government, Media, Academia And Hollywood Given The Anti-Semitism They Have Faced? (Quora)

Michael Laitman, On Quora: “How are Jewish people able to obtain such high positions in government, media, academia and Hollywood given the anti-Semitism they have faced?“

Anti-Semitism actually helps Jews succeed in many areas of life since it pressures them to outsmart, outwork and outcompete others.

In addition, Jews experience disproportionate success because in addition to their corporeal root in this world, they embody a spiritual root. The spiritual root of the Jewish people comes from their ancestors becoming Jews in ancient Babylon some 4,000 years ago. Abraham gathered Babylonians from all walks of life according to a spiritual idea, to rise above people’s divisive drives of that time and reach “love your neighbor as yourself.” The attainment of this state is what made this gathering of all kinds of different people “Jewish” to being with (the Hebrew word for “Jew” [Yehudi] comes from the word for “united” [yihudi] [Yaarot Devash, Part 2, Drush no. 2]).

Therefore, due to once experiencing a spiritual state of unity, that special connection with the spiritual force of nature remains latent within the Jews till today. Jews themselves don’t know that they possess such a force, but they do, and this additional force is the reason for their disproportionate success in many fields. Especially in areas involving innovation and invention, the Jews are particularly sharp, which stems precisely from their inner connection to nature’s hidden unifying force.

Writings of Baal HaSulam, “Preface to the Wisdom of Kabbalah,” Item 160