Only by feeling, while in descents, what an egoistic brute he is, completely ruled by his egoism, can a person appreciate being redeemed from egoism by the Creator, and understand how to ask the Creator for his soul’s salvation so he won’t be submerged into egoism any longer—so the Creator will grant him complete redemption.

Until one attains the Creator’s revelation, his exertion in this increases the Creator’s concealment, with the aim of eliciting additional efforts in the person, required to reach the full measure of efforts necessary for revelation.

If we don’t increase love, it will disappear, like any natural phenomenon.
Repeating causes the pleasure to be reduced.
Thus we must constantly increase our desire for one another.
Then love can go on forever.
Hence the most important thing is to know how to constantly renew the desire.
That’s what Kabbalah is about.

We have to be fulfilled by our prayer. When asking from the Creator, we do not expect to receive anything. The plea to Him will in itself be the fulfillment. In our request to the Creator, we want to saddle our egoism (screen and Ohr Hozer – OH).
In OH I feel the image of the Creator that I’ve built. Since the Creator Himself is unattainable.

If I receive fulfillment from the one I love, then love quickly disappears and can degenerate to hate. Love means that I constantly develop a yearning for my beloved. Then I can be fulfilled by them forever. This yearning is called Reflected Light.
From Twitter, 7/9/19

Study The Descent In The State Of Ascent

In the state of ascent, we should study the previous descent, and in the state of descent, we should imagine ascent. The whole world is a concealment and that is why it is called so: “Olam” – world, from the word “Alama” – concealment. Therefore, we need to try to imagine ourselves in the upper, exalted state. After all, no changes occurred in all of reality beside the concealment through which the Creator plays with us. He intentionally created the concealment so that we would appreciate the revelation, the state of adhesion with the Creator and existence in the world of absolute good.

We must make efforts to return to this picture by removing the veil from our eyes and from our senses. This concealment is called the evil inclination, our egoism. If a person tries to feel like he or she is in a perfect state, as if in the end of correction, yearning for the revelation of this state with one’s entire being, then one advances to it.

Then we would have more strength, energy, and uplifted spirit to reach the state of truth, that is, the revelation of the fact that there is none else besides the Creator, good that does good, who fills the entire universe. We are in adhesion and connection with Him, and only some cloud obscures our senses and does not let us feel it.

We should not give in to this concealment, the egoistic fog, deliberately created by the Creator, but rather we should try to dispel it. We seek to lift the veil from our eyes and senses in order to feel corrected, connected with each other by love within which the Creator and our connection with Him are revealed to the same extent to which we are connected with each other. We should live so that through the concealment we would reveal the good by dispelling the fog and removing the veil of concealment.1

Concealment turns into our screen above which we yearn to resemble (Edomeh) the Creator and then become human, Adam. The Creator does not force us to do this—we ourselves want to become like the Creator. Concealment turns into both the concealing screen and the revealing screen for us.2
From the 1st part of the Daily Kabbalah Lesson 6/25/19, To Learn From the Descent in the State of Ascent
1 Minute 0:20
2 Minute 9:52

Thinking Of The Creator

Question: What does it mean to think about the Creator?

Answer: Thinking about the Creator means seeing the single force that presents itself to you behind all objects, actions, thoughts, and events.

The whole world, everything that affects your five senses, everything that you have before your eyes, it is all the Creator. He simply reveals Himself to you this way in order to tune you to Him through all your senses.
[247778]
From the Kabbalah Lesson in Russian 3/2/19

New Life 1114 – The Art Of Connection In Nature 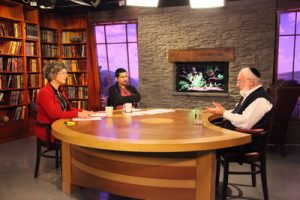 New Life 1114 – The Art of Connection In Nature
Dr. Michael Laitman in conversation with Oren Levi and Yael Leshed-Harel

All interconnectedness in nature derive from one central connection between the Creator and the created being. The Creator is the power of bestowal, a spiritual force that glues everything together. He bestows to the spark that exists in every created being and obligates each one to accept the general law of nature and connect with others as a single body. The wisdom of Kabbalah teaches us how to achieve our ultimate purpose, which is a comprehensive, perfected, mutual connection that results in advanced levels of matter, energy, and spirit.
[247364]
From KabTV’s “New Life 1114 – The Art of Connection In Nature,” 5/30/19

Writings of Baal HaSulam, “Preface to the Wisdom of Kabbalah,” Item 76