Don’t Be Afraid Of COVID-19

The coronavirus came to tell us to stop running around like a hamster on a wheel, and start to develop a new way of thinking.

The coronavirus is no virus. It’s mercy from nature showing us what a terrible world we have created, and how much we are suffering in it.

For years, we were destroying everything that we created, everything that raised us, and today, instead of a world war that we would definitely have started, nature gives us a small virus, so that we slow down and realize what we have become.

These days, we have a lot of fears. We are afraid to get infected and die, we are scared to lose our financial means for existence, and we are worrying about ours and our children’s and grandchildren’s future. The global pandemic has terrified and paralyzed the entire world, binding people to their homes.

How should we adapt to the new coronavirus reality?

We should definitely calm down. We were not built to run races all the time. Our final goal is to attain what we are living for.

We have to understand the special role that the coronavirus has. It came to shake our previous foundations, so we could change them and discover more meaning through positively connecting to each other in our lives.

We should leave all of our fears behind, and instead of being worried about how to protect ourselves from the coronavirus, take care of how to correctly use this given moment and draw the correct conclusions.

The coronavirus “cleanses” us. It shows how our egoistic attitudes to each other limit us and make us pursue imaginary goals. Thus, the coronavirus gives us a chance to rise above our ego, feel the world through our inner structure, through our soul, and wake up to a completely different, infinite, whole and complete reality.

We are ready to take a step in order to here and now, in this life, reach the state of eternity, and as we can see, nature helps us to do so. 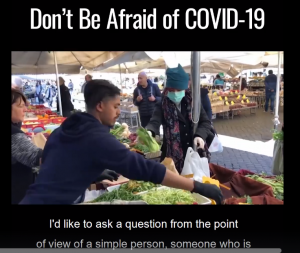 Let’s Make This An Epidemic Of Kindness

The burdening of the heart is given to us in order to ensure our freedom of choice. The global crisis, which has engulfed the world due to the coronavirus epidemic, shows how the upper force deals with each person, leaving us the opportunity for free choice so that we would balance good and evil, building a middle line, and always leaning toward the good.

The coronavirus reveals to every person, every country, and the entire world the truth about our relationships. It forces us to sit at home locked up and think about why this is happening and for what purpose?

If we ourselves realize that we can live differently, not the way we used to live, but in harmony with nature, in good relations with each other, rising above our egoism, then we will not have to go through a long and painful crisis. We can get out of this epidemic very quickly. The virus shows us how much we have put the world out of balance.

Each time the Creator arranges a situation that is more effective for correction for us. Therefore, the coronavirus epidemic and quarantine are beneficial for the world’s correction. The virus shows us that we are incapable of being together.

Instead of transmitting good and useful things to each other, we transmit disease and condemn each other to death. So let us learn how to connect with good connections in order to transmit good emotions, pleasure, joy, love, unity, and warmth to each other. This is what is supposed to be between people.

Let us scrutinize why we are transmitting a deadly virus to each other and how to turn this evil into good in order to move toward a new world. I really hope that we will understand this ourselves and be able to explain this to everyone.
[261786]
From the 2nd part of the Daily Kabbalah Lesson 3/17/20, Lesson on the Topic “Pesach (Passover)”

The Essence And The Root Of Unity, Part 5

Why can only united people play soccer?

Remark: Many scientists say that partnership, the tendency to unite, to establish relationships, to live with each other and collaborate, is one of the greatest distinguishing features of life.

Question: Evolution is a way of integration, assembly, joint development of complex structures. On one hand, people that are inextricably linked and dependent on each other in the pursuit of wealth, power, and knowledge are integrated into tribes, empires, and states.

However, if you look at the inanimate, plant, or animal nature, you will see that when they are combined they acquire some kind of super-mind. For example, when living cells are combined, they form a super-organism. And people can unite only to play soccer or, at most, to kill their own kind. Why is that?

Answer: It is because, at the inanimate, vegetative, and animate levels, all parts of nature unite instinctively under the external influence of a higher force that makes them do so. A person is obliged to find and create this technique, strength, and order of unity in himself contrary to his egoism.

It is a work contrary to selfishness that is not found in inanimate, plant, and animal states of nature other than the human, which distinguishes people from everything else. It lets people become owners of a growing mind, skills, and principles to reveal nature. Everything below them is on inanimate, vegetative, and animate levels.

However, at their level, at the level of a human, of society, people cannot reveal anything. They discover only some primitive dependencies and nothing more. After all, they have only one power, that is the egoistic force of separation. They don’t have the second force, the altruistic one.

Therefore, when they work with one force, nothing happens. They try to be in relationships with each other in order to develop precisely selfish power. Then this happens in a very bad way by constant pokes and crises.

If people had a positive force as well at their disposal, the one that opposes the negative, then, of course, they would succeed in everything.
[258075]
From KabTV’s “Systematic Analysis of Israel People Development” 3/24/19

Descent Is A Motivation To Advance

Question: You said that if one advances by himself, he can avoid descents. What does it mean to advance by yourself?

Answer: If you feel that each fulfillment is insufficient and immediately look for a new fulfillment, you will feel the old one as a deficiency, as a kind of descent.

Suppose I want to achieve some great knowledge. I ascend all the time, constantly striving for this, but I still have not reached it. So, I need to draw that great treasured degree that I want to achieve to myself.

And then I will consider all the intermediate degrees, even if I perceive something in them, incomplete because this attainment will not fill me but will only encourage me to move on.

Question: Are there any descents from which it is impossible to rise?

Related Material:
Is It Possible To Manage Without Descent In The Work
A Descent Is The Momentum For The Leap Upward
Faith That Shines On A Dark Night

Rising Above The Universal Egoism

Question: We see how anger, indifference, and unwillingness to feel what is going on with another person increases in people. Is it possible to somehow stop this by interacting with them or by asking them?

Answer: Not at all! In no way. This is the law of the universal egoism, which increasingly develops in us, becoming more prominent, vigorous, and terrible. It will continue this way until we finally decide that we have to rise above it. Otherwise, we will not survive.

And it is possible to rise above the ego only with the help of the science of Kabbalah. There is nothing else we can do.

So, after all, we will have to master this science in order to rise above the ego, obtain a second quality, altruism, and by correct interaction between the positive, altruistic, and the negative, egoistic qualities, reveal the upper world.
[261025]
From KabTV’s “Fundamental of Kabbalah,”, 1/26/20

Related Material:
There Is A Way Out Of The Egoistic Impasse
The Plan For Exiting Crisis, Part 2
We Are Witnessing The Birth Of A New Era

Become Whole With The Creator

Question: In our world there are all kinds of manifestations of feelings between people, emotions that fill them, such as friendship and love.

In the ten, with the right communication, the same force will arise, the same feeling will fill us; is this called the revelation of the Creator? Or is it something else?

Answer: The revelation of the Creator occurs very sequentially when people begin to unite so each of them dissolves in the ten.

Thus, if a person gets rid of his egoism, then as he rises above it, while interconnecting with others, there, within others not within oneself, he begins to feel the property of bestowal and love, the property of good connection between everyone, independent of egoism. This is what he reveals.

Question: By working correctly, doe each member of the ten get filled with something that has to do with a higher power?

Answer: Yes. It changes, fills, and connects them. They unite in this property of bestowal and begin to examine it between themselves. And then it turns out that the ten and this force, which they call the Creator, become one single whole.
[259837]
From KabTV’s “Fundamentals of Kabbalah,” 3/20/19

Related Material:
The Ten—A Special Kind Of Unity
A Group Of Ten As A Tool For Adhesion
A Whole Group Of Ten

Lesson on the Topic “Pesach (Passover)”