I am very excited about the decision made by the Petach Tikva municipality, headed by Mayor Rami Greenberg, to name the street where our World Bnei Baruch center is located, in honor of my teacher, Kabbalist Baruch Shalom Ashlag (RABASH).

As of August 16th, we are located at the following address:
12 HaRabash Street, the city of Petach Tikva (translated from Hebrew is “The Gate of Hope”)

How Do Anti-Semitic Ideologues Identify The Role of Jewish People?

One of the biggest anti-Semites of the 20th century, Henry Ford, wrote about a special influence on the world that Jewish people can have. Somehow, this fact calls out the nations of the world toward Jews. Why would it be so?

The wisdom of Kabbalah describes the cause and solution of anti-Semitism in a way that leads to peace for everybody, regardless of race or nationality.

It describes the Jewish people as those who gathered upon a common desire to unite, i.e. 4,000 years ago in ancient Babylon, during times of growing social division and hatred. Abraham’s group gathered out of 70 nations, connected around the principle “love covers all transgressions,” and later on became known as “the people of Israel” (from the term “Yashar Kel” – “straight to the upper force”), and “Jews” (the Hebrew word for “Jew” [Yehudi] comes from the word for “united” [yihudi] [Yaarot Devash, Part 2, Drush no. 2]). At that time, atop growing social division and hatred, Jews received the method of how to connect above the division, and its implementation brought about great improvements in society.

Unfortunately, through the centuries of exile, the Jews forgot about this method and attainment they once received. Therefore, as social division brews in our times, the nations of the world feel subconsciously that the Jews are to blame for all kinds of problems in their lives. Anti-Semitic sentiment thus intensifies as an alarm clock getting louder and louder, trying to wake up the people of Israel to realize their inner potential for unification above the divisions, above the growing urge to enjoy at the expense of others.

Humanity feels that its well-being depends on Jews, and if the latter fail to put some effort into making the correction happen, they experience its negative consequences in the form of anti-Semitism. Likewise, just a little effort toward creating a more united, positive, supportive and encouraging environment among the Jewish people will send positive ripples of unifying energy around humanity, and the lessening anti-Semitism would come about together with a happier, better connected world. 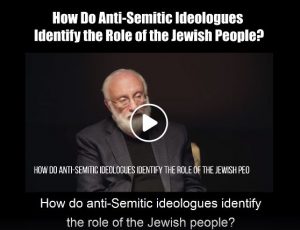 Preparation From Above And Our Work

It is written, “Anyone who mourns for Jerusalem is rewarded with seeing its joy.” This means that we need to pray for the public, but what should we ask for? Does the public have a desire for spirituality? The fact is that all the desires existing in the public belong to a person working on correction. Desires are within people, and a Kabbalist must develop intentions. Desire and intention are two separate categories; they do not exist in the same place. When a Kabbalist works with a screen, restriction, and reflected light, the desires start falling into place and change according to the intention with which he wants to use the desires.

The vessel is the intention to bestow. The entire correction consists of achieving the correct intention. The desires exist. They are just arranged incorrectly, unequipped with the correct intention. There are no new desires. The shattering, restriction, and concealment all happens so we can scrutinize desires and start connecting them. Like a baby, who was born and starts growing, we correct the shattering and grow our soul.1

We work on the intention to make it in order to bestow, directed to bringing contentment to the Creator. In order to bestow to the Creator, it is necessary to concentrate the correct intention and select from the shattered desires those that will be able to work under its control. By doing so, we build the spiritual Partzuf, the extent of our bestowal.

This is why there were breakages, preparations for the correction that occurred through no fault of ours. There is almost no work of the lower one in this. The Egyptian exile, the desert, the destruction of the First Temple, the Babylonian exile, then the Second Temple, which was also destroyed, and the exit to this last exile—how could all this happen?

It was just preparation from above. Now, all we have to do is make a final correction. Only the work toward the final correction is considered the person’s work; all the rest was preparation.2
From the 1st part of the Daily Kabbalah Lesson 8/11/19 “The Ninth of Av”
1 Minute 32:20
2 Minute 37

Related Material:
“Everyone Who Mourns For Jerusalem Is Rewarded With Seeing Its Joy”
Jerusalem: Not Stones But The Spirit
Jerusalem: A Symbol Of Unity

Is Israel An Apartheid State? What Are The Facts That Prove Or Disprove This Opinion?” (Quora)

Michael Laitman, On Quora: “Is Israel an apartheid state? What are the facts that prove or disprove this opinion?“

I have no interest in such labels that people pin on Israel. I evaluate Israel solely according to the authentic Kabbalistic sources that I have been studying for the past 40-plus years.

In any case, taking into consideration the amount of Arabs in Israeli society, from studying at universities through to assuming respected professions such as lawyers and doctors, I wouldn’t consider Israel an apartheid state. Apartheid is something else entirely. But again, whatever name-calling is addressed at Israel doesn’t matter to me. What matters is the intensifying need of the people of Israel to carry out their role in the world: to unite (“love your neighbor as yourself”) and be a conduit for unity to spread worldwide (“a light unto nations”). If the people of Israel will observe such a condition, then it will be good for them and for the world. If they don’t, then it will be the opposite.

Is it Possible to Level Our Desires?

Question: They say that our desires can be leveled, like it is customary in oriental techniques. What can be done to want very little? After all, the less you want, the less you suffer.

Answer: This is true, but only if I begin to evaluate my desires in terms of pleasure or suffering. Then I can come to the conclusion that I should be willing to suffer less. This is a certain volitional exercise with which I achieve a more comfortable state.

Question: So how do I control these desires?

Answer: In principle, I do not control them, but the desire to enjoy or suffer less controls and determines how much I can reduce my desires.
[248979]
From KabTV’s “Basics of Kabbalah,” 12/03/18

Writings of Baal HaSulam, “Preface to the Wisdom of Kabbalah,” Item 12