Devoted To The Friends

Even if we manage to think about the friends and stop caring about ourselves, in the next moment it disappears. It will never become a constant thought, but will change at a frantic pace. After all, we need to scrutinize all the crumbs of the desire, all of its fragments. The vessel of the soul was shattered into pieces and then fell from the height of the world of Atzilut through all the worlds: Beria, Yetzira, Assiya, continually breaking into such tiny particles, the smallest atoms, which can no longer be divided.

Now we need to restore this soul, assembling it from these atoms. I receive the foundations of creation in my hands and think about what to assemble from them. In our world, we need to know the laws of valency to make up some substance from the basic elements. It is the same in the spiritual world; I begin to learn how I can connect the elements of creation on myself. What does it mean to connect two, three, or four atoms for the sake of bestowal?

How are they connected on the inanimate level into inanimate matter that does not move and develop by itself? Then, the foundations of creation must be connected into vegetative matter so that the connection of atoms causes development, that is, becomes more similar to the Creator. A plant already has life in it. It turns out that I took the still, inanimate matter and brought it to life! This already is a completely different degree.

I then create a connection on the animate level that exists on its own and has some kind of free choice: moves freely, excretes, and absorbs. This is how we build all kinds of connections between us, starting from zero and even from minus, coming from hatred to unity.

Imagine, how much we must connect with a friend in order to create vegetative matter, that is, for the group to become a “plant” and begin spiritual life, reaching such a connection above rejection that it begins to emit and produce materials, scrutinizing what is good and bad for itself. The friends in the ten begin to grow all the time.1

The main action is provided by the environment, not actions of a person himself, but of the environment he is in. You can be a perfect seed of some elite sort, but if you are not planted in good soil, then nothing will come of you. The environment is more important than the seed itself, that is, the root of the soul.

There are even stories about Kabbalists who initially had no chance of reaching spiritual development. According to the root of their souls, they could not ascend to high degrees. Only thanks to the environment they joined, without any idea of what they were saying and doing there, only through their constant presence, did they receive a new soul. It is even possible to achieve the state when the Creator will change your soul, not because the former soul was bad, but it was shallow, not suitable for the elevated role. It turns out that a person as if moves from the heel of Adam HaRishon to the heart or brain of the entire system of the general soul.

It depends on how devoted the person is to the group, doing everything one can. Those people who in the beginning were very unsuccessful, could not understand and integrate into the group, felt great resistance, but did not leave, precisely those people achieve great success later.

Therefore, every day it is necessary to take care of improving and enhancing your environment, in order to receive optimal influence from it, which will help you become even more devoted to the friends, and through the friends, to the Creator.2
From the 1st part of the Daily Kabbalah Lesson 8/12/19, Writings of Baal HaSulam, “Introduction to the Preface to the Wisdom of Kabbalah”
1 Minute 31
2 Minute 1:22:51

Related Material:
Until All The Friends Are In My Heart
Make Space For The Creator In The Assembly Of Friends
See The Friends As New

Woodstock’s 50th: What Ever Happened to Love and Peace? 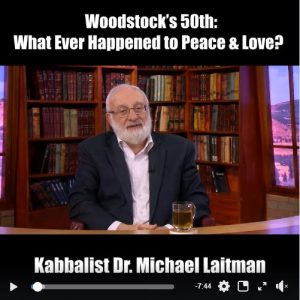 Question: Our desires are controlled by society. Why is it set up this way?

Question: Does it mean that the society controls our desires?

Answer: It does not merely control them, it defines them! It points me: this one—yes, this one— no, to what degree, etc. Everything depends on the environment in which I exist.

A desire at the human level can change its location and fall under various social influences. According to this, it will also change the desires.
[248976]
From KabTV’s “Basics of Kabbalah” 12/3/18

“What Are Your Reasons For Supporting Israel?” (Quora)

Michael Laitman, On Quora: “What are your reasons for supporting Israel?“

I support Israel for a single reason: that Israel becomes a source of the world’s connection. Through the special connection that Israel has the potential to bring—a connection above people’s innate divisive drives (“Love covers all transgressions” [Proverbs 10:12])—the world can elevate itself to another level of existence, both corporeally and spiritually:

Corporeally, this means that all human conflicts and natural disasters would cease. We would feel a life filled with happiness and confidence as a result of the balance with nature that such connection would yield.
Spiritually, it means we would rise to a new dimension of eternity and perfection. This is due to awakening the force of connection and love dwelling in nature to reveal in our newly-created connections.

Therefore, I support Israel for this sole reason.

Today, it is very sad for me to see the contrary, how Israel is the source of all of the world’s problems (“No calamity comes to the world but for Israel” [Yevamot 63]). That is, the more that the people of Israel fail to apply efforts in the direction of connection—connection above our differences for the sake of positive global connection—the more the world sinks deeper into division and conflict. It is as Kabbalist Yehuda Ashlag (Baal HaSulam) writes in item 69 of his “Introduction to The Book of Zohar,” that “they cause poverty, ruin, robbery, killing and destruction in the whole world.” Why? It is because the people of Israel possess the method for the correction of human nature, i.e. correction of the egoistic, self-centered drive to benefit at the expense of others, which is growing rampant in our era. The more the ego inflates without an effective form of regulation—the connection above differences that the people of Israel have a method and a role to realize—the more problems and crises abound in the world.

Moreover, the more the nations of the world feel problems in their lives, the more they feel hatred toward Israel. This is because they subconsciously feel that the people of Israel are the source of their problems and are holding something significant away from them. Anti-Semitism and anti-Israelism thus rise due to the people of Israel’s failure to implement the role required of them in the world.

Therefore, the people of Israel need only come to the realization that they hold their own as well as humanity’s life and well-being in their hands. By starting to tilt the scales toward connection, they will bring harmony to themselves and to the world, whereas by continuing to tilt the scales toward division through their indifference and rejection of their role, they will continue inviting problems to the world and hatred to themselves.

It is thus my hope that the people of Israel will acknowledge their role and start making efforts to connect sooner rather than later, because if things keep developing as they currently do, then not only will the elimination of the State of Israel become a reality, but we will experience wars and major suffering on a global scale the likes that we have never seen before.