The Structure Of The Universe, Part 5

Question: Let’s suppose I receive, do not even feel from whom, and it does not interest me. It is like when you give something to an animal and it doesn’t matter to it who you are.

But the light begins to develop Malchut in a way, that at the last stage, she begins to understand who is giving to her and she wants to become similar to the Creator.

Answer: Yes, it is so, contrary to her original desire. To do this, she has to abandon the actions she performed before.

Therefore, Malchut restricts herself, ceases to receive at all, and thus, at least somehow resembles the upper force, in which there is no desire to receive.

Then she begins to develop, which is dictated by completely different motives. Malchut decided that she absolutely has to be independent, otherwise she does not exist.

When can she become independent? Only if she will counteract the light. How can she do this? She agrees with all its actions only when she herself allows it to influence herself.

To the extent that she can protect herself from the influence of light and put herself in such a way as to first prevent its impact, and then resolve it, this will manifest her independence, her understanding of the Creator, and approval of His actions.

That is, when I limit my lack of independence and stop being an animal, I become a human. “Human” is “Adam” in Hebrew, and it comes from the word “similar – Domeh” to the Creator. To the extent that I can restrict myself from an unconscious animal receiving and make myself a conscious recipient, I am called Adam.

This is an absolute control, an understanding of what I am doing, and a manifestation of the properties of the Creator in me.
[248137]
From KabTV’s “Basics of Kabbalah” 11/27/18

“The Cause of Recurring Mass Shootings in America (Part 1)” (Newsmax)

My article in Newsmax: “The Cause of Recurring Mass Shootings in America (Part 1)” 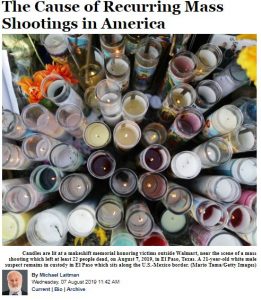 Yet again, two deadly mass shootings within hours in Texas and Ohio have shocked America.
At least 31 people are dead and dozens wounded in both incidents, spreading fear, bewilderment and confusion throughout American society.

The same scenario replays over and over, only the locations and names change, fueling a blame game in a bitter political campaign for next year’s presidential race and rekindling the debate on gun control and right-wing extremism.

When will the bloodshed stop?

What Breeds Ongoing Violence in the U.S.?

The violence is the result of increasing egoism, i.e. self-benefit at the expense of others, everywhere in the world, and particularly in American culture.

Humanity looks to the United States for an example of positive, calm and peaceful relations. Such a state will never come about by drafting new laws, but only through a change in the way human nature operates in society: Instead of relating to each other through egoistic lenses, to develop new supportive, encouraging and understanding attitudes to every person. In order to reach that level of positive change, society needs to implement a method of connection that it has yet to realize.

El Paso’s deadly shooting, handled as domestic terrorism, underscored similar extremist views against immigrants, Jews, and other minorities seen in the supremacist acts of violence in a mosque in New Zealand and in the synagogue in Pittsburg and Poway, California, earlier this year. The motive behind the shooting in Dayton, Ohio, is still unclear. The 24-year-old gunman apparently showed radical liberal views and obsession with violence before the attack.

More provocations can be expected not because of Trump’s border wall with Mexico, the toughening of policies on migrants trespassing across the border, or because of the upcoming U.S. presidential elections. America is likely to experience many more similar difficult events as a direct result of major struggles in an increasingly egoistic society unless some action is taken.

Over 250 mass shootings have occurred in the U.S. since the beginning of 2019, and every event has served to increase public concern, but it is short-lived and vanishes as soon as a new item occupies the headlines. If this trend continues, since no one can find a real solution, the bloodshed that Americans will face is bound to become unbearable.

It is true that in America it is easy to purchase firearms, but the trigger finger is the result of the growing egoism in American society. Tension and aggravation accumulate daily until they explode in cruel ways. And when people feel like life is not worth living, their senseless acts reflect the worst that culture has taught them.

What the World Expects From the United States

It comes as no surprise that the U.S. faces so much trouble. American society is closely tied to the world’s opinion, and vice versa. Since World War II, the world has been immensely influenced by the United States. There is an innate expectation upon the highly developed and wealthy USA to enlighten the rest of the world and set a constructive trend for others to follow. If America succeeds, everyone will become fueled with a new kind of positive inspiration, but if it fails, it will need to absorb the blame.

The plethora of contrasts and conflicts that exist in humanity are more pronounced in the U.S. than elsewhere. These opposites exacerbate the differences between Democrats and Republicans, blacks and whites, American-born citizens and immigrants. The super-heated cauldron bubbles and erupts as violent events that shock the world.

The American vision includes two polar extremes: on one hand, the freedom to do whatever one wants, while on the other, the need to refrain from harming others. It is a country where every person is free to express him or herself, but should opt for moderation. It is a country where any person can walk around with a weapon for security, but should never shoot the gun unnecessarily. In practice, however, we do not see the materialization of these ideals outside the text of the Constitution.

As the world groans under the pressure of two conflicting forces — the global force of connection, and the separating power of the ego — we have entered into a state that increasingly resembles ancient Babylon 4,000 years ago prior to its collapse (more on that in Part 2 of this article). But today we cannot pull away from one another in order to calm our egos down. Our only option is to work on our connection, on our unity.

Human society today needs an addition of the unifying positive force that balances the negative power of our ego.

The question is how?

In Part 2 of this article, I will explain the method of connection for a harmonious and peaceful existence: a method devised back in the times of ancient Babylon by Abraham the Patriarch as a tested solution to rise above the growing social division and hatred of that time.

This article is Part 1 of a series.

Question: A woman can internally pass her desire to a man. Many women wish their men were closer to the Creator. What does it mean to pass this desire?

Answer: If a woman wants something from a man, she will always get it. The world is arranged this way.

A woman’s desire is not announced aloud. You know yourself how to influence a man quietly, without opening your mouth but in such a way that he feels as if he is beaten on the head. This is the correct action on behalf of a woman. It is intentionally arranged this way in nature. We, men, must accept this and even be happy that women have the opportunity to guide us on the right track.

If a woman wants her husband to move toward understanding the meaning of life, then, of course, this is a special woman and a great wife. Therefore, we must appreciate such women, set them as an example for others. And of course, we should help in some way so that husbands would appreciate and obey them. I wish to the ones who are not married to find such husbands.

Question: Can there be overkill from the women’s side?

Answer: No. Women have a very clear maternal attitude. She knows how to behave in relation to her husband. If she aspires to the purpose of creation, she really will be able to direct him. So it turns out that a man implements and a woman directs.

I can say from my forty years of experience that if a woman in the family recognizes the greatness of the goal and what the group does, then the husband will definitely study and will not go anywhere. Yet, if the wife is against it, in the end, he stops studying and leaves.

Here, everything depends on the wife. The female’s desire in the world is much stronger and more decisive than the male’s.
[249338]
From the Kabbalah Lesson in Russian, 4/14/19

Related Material:
Men, Do Not Underestimate The Desire Of Women!
What Are Women Capable Of?
Women’s Desire Leads

When Everything Disappears From Memory…

Question: When I read Kabbalistic books, I undergo many experiences and sensations. But after reading, everything disappears from my head. What to do with it?

Answer: This is good! While reading, you experience all of this, pass it in your states. Do not worry that they disappear. The main thing is that you have passed through them, that they have worked within you as long as they should have worked.

Do not worry about what you have forgotten, what you read; you should not hold on to anything: not in memory, nor in feelings, nor in your heart, nor in your mind. Do not try to hold on to anything! Let everything flow. The next state will always be higher, better than the previous one. Make room for it!
[248792]
From the Kabbalah Lesson in Russian, 3/10/19

Related Material:
Don’t Be Afraid To Start All Over
A Time When You Will Remember Everything That You Have Heard
Start Everything From The Beginning Every Single Day?