The Structure Of The Universe, Part 2

Stages of Development of Creation

The Creator emanates the Light (+) of fulfillment, satisfaction, which gives birth to a desire for it, the Kli (vessel) (-).

The Light is stage 0 (Keter). The first stage, Hochma, is already a desire to receive that wants to enjoy the Light. This desire is natural, instinctive. We usually depict it in the shape of a cup receiving the Light. 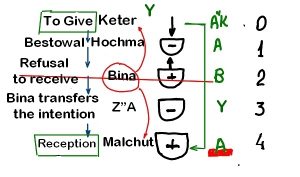 After the Light created the desire, it began to transform. Now it wants to be like the Light, and therefore, it refuses to enjoy. The Light gradually transfers its properties of bestowal, and the desire, which now wants to bestow on its own and be similar to the Light, empties out. This is the third stage, Bina.

Question: If at stage one I wanted to receive, then in stage two, under the influence of the Light, do I suddenly want to bestow, become like the Light?

Answer: Under the influence of the Light you begin to change.

The third stage is a very interesting one. It is opposite from the first stage, meaning that here the created being achieves the state opposite to the one it was created in. Afterward, Bina decides: “If I want to bestow, I must realize myself.” Therefore, with its desire to bestow, it creates a new stage called Zeir Anpin.

This is a desire to receive but a very small one, not as big as the stage of Hochma.

Question: Why is stage two insufficient? After all, we become like the upper force that bestows.

Answer: No. We become like the upper force in our intention, but not in our form. We do not bestow anything in Bina, we simply refuse to receive. But when Bina realizes itself in Zeir Anpin, the third stage, this is how it realizes itself as similar to the Creator.

Therefore, Keter is the property of the Creator to bestow. Hochma is the realization of this desire, bestowal. Bina receives the property that Hochma passes on to it, and in turn, refuses to receive.

But for now, it has nothing to give and it does not even want to.

In the third stage Zeir Anpin, Bina realizes its property of bestowal. It is as if it has given birth to it, created this next property, and fulfilled it.

Question: So, in this third stage, I both give and take a little?

Answer: Yes. Zeir Anpin is complex, compound, as if it consists of two parts, as does Bina. Hochma also consist of two parts and so does Keter. Meaning, the desire to receive is always present.

When Zeir Anpin is completely filled by Bina, it begins to feel that what is most important to it is to be filled rather than refusing to receive. Therefore, the property that desires to be filled is called Malchut (kingdom)—the kingdom of desires.

Related Material:
The Structure Of The Universe, Part 1
The Four Stages Of The Development Of The Desire
Know All Forms Of The Upper One And Conform

The Next Small Step For Mankind
Podcast Powered by podPress (v8.8)