I Hold Myself Accountable

The nation of Israel is an unusual group, because our connection is not on a corporeal level, and therefore, it is very unstable. It seemingly connects us somewhere above, but we feel no connection to each other. All of this is because of our big egos that separate us from each other. There is no natural, corporeal, worldly connection; there is only a spiritual one, which evades our senses.

Baal HaSulam writes that only common problems unite us, like brothers in misfortune. Thus, we resemble a bunch of nuts in a bag united only by the bag alone, which does not let them disperse. Therefore, our only hope is a public education, a movement toward national unity capable of igniting love for the nation within the people, so that we will feel ourselves as one body.

We must feel ourselves not as brothers in misfortune, as we do today, but we must feel the natural, eternal connection that exists inside each of us that no one can hide from. It is the upper light that holds us together. Other nations are connected instinctively by nature itself, feeling a sense of belonging to their nation. But for the people of Israel, this connection requires our participation, we must draw it from above by ourselves.

This love existed among us at the time of Abraham, the founder of the nation of Israel. But after the destruction of the Temple it started to fade and was completely lost over the years of the exile. We must rebuild this love now so that it would be natural and spiritual. After all, there is no corporeal love between us and we do not want the connection with each other like the other nations. There is nothing left of the national love after the two thousand years of exile.1

I have to do everything to awaken the group. Regardless of their response, I keep doing everything to unite them: quietly praying for my friends, and doing various acts that everyone can see, leading by example. By doing so, I depend on no one but the Creator, so I ask Him to give me the strength and the desire. Then, I turn to my friends and try to inspire them. I hold myself accountable: “If I am not for me, who is for me”2
From the 2nd part of the Daily Kabbalah Lesson 7/17/19, Writings of Baal HaSulam, Newspaper, “The Nation”
1 Minute 1:00 – 1:19
2 Minute 12:00

Your Addition To Gmar Tikkun

Even when a little man at the bottom asks and demands, he passes his deficiency up to the very Malchut of Ein Sof. In response, the light of infinity descends upon him, passing through all the degrees and leaving a record about this person in each one of them. This thread, stretching from above downward, is recorded in his name. Thus, every time when he raises a deficiency and brings down a little bit of light, he invests his part, his addition to the general end of correction.1

The attainment of a Kabbalist depends on his state, character, and height of the root of his soul. However, a Kabbalist does not aspire to gain insight in spirituality as much as possible; he wants to see only what is beneficial for correction. If the revelation is not for the benefit of correction, he “conceals his face.” The prayer of the righteous rises solely for correction, and he must take care of the screen that will allow him to accept revelation only in the light of Hassadim, not for his own sake.2
From the 1st part of the Daily Kabbalah Lesson 7/31/19, Writings of Baal HaSulam “Preface to the Wisdom of Kabbalah,” Item 160
1 Minute 42:30
2 Minute 43:40

Related Material:
The Next Stop Is Gmar Tikkun
Reaching Personal Gmar Tikkun Depends Only On One’s Efforts
Is There Absolute Attainment?

“The Cause of Recurring Mass Shootings in America (Part 2)” (Newsmax)

My article in Newsmax: “The Cause of Recurring Mass Shootings in America (Part 2)” 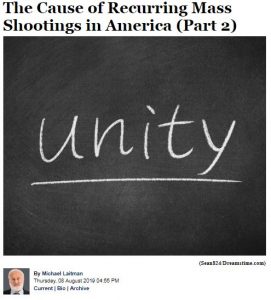 Today’s divisive social and political climate in the U.S., a melting pot within a boiling society that erupts in recurring mass shootings, resembles a modern-day version of ancient Babylon 4,000 years ago.
A look at how the crisis was handled at that important period in history will give us the keys for a more harmonious coexistence today.

The ancient Babylonians started out as a united civilization. Eventually, they experienced a growth in their egos. As a result, they began exploiting each other for personal gain and felt increasing social division with its conflicts and hardships.

Troubled by the growing division and hatred in society, a Babylonian sage, Abraham, started promoting his method — a method of connection — which was premised on the idea that by achieving connection among human society, we achieve balance with nature’s own connecting tendency, and thus experience a plethora of positive outcomes: peace, love, happiness, and meaningfulness to name a few. He invited anybody who wanted to learn the ways of nature: how nature is fundamentally a quality of connection, bestowal and love, and how human society could elevate itself above its divisive drives to harmonize with nature.

The people who came to Abraham, he formed into a group.

This group became known as “the Jews,” which means “a united people” (the Hebrew word for “Jew” [Yehudi] comes from the word for “united” [yihudi] [Yaarot Devash, Part 2, Drush no. 2]). That is, the Jews were never a biologically-connected people, but a gathering of people who felt the problems of their civilization’s growing divisions, and that the solution to those problems were in learning and applying the laws of nature’s connectedness to human society.

The rejection of living according to a destructive egoistic paradigm, on one hand, and the attraction to the unifying idea and method that Abraham taught, on the other, eventually accumulated into this group’s attainment of a new, unified perception and sensation of life.

They learned how to not fall to the ego’s demands for self-fulfillment on account of others, and also experienced new elated sensations beyond the pleasures on offer in any other place, resulting from their mutual efforts to unite. Their unity then spread throughout the human consciousness of the time, as seemingly out of nowhere, people started thinking and acting more positively, peacefully, and considerately toward each other.

The sublime state of unity expanding throughout human civilization came and went, as the human ego eventually outgrew the level of unity that the Abraham-led group attained.

However, the immense significance of what this group known as “the Jews” attained — unity above division — remained throughout history, continuing into our era, as a subconscious impression in humanity. In its positive form, this impression is that the Jews have something special that other nations do not have. In its negative form, this impression is that the Jews are somehow responsible for society’s misfortunes. All kinds of reasons are pointed out as to what’s wrong with Jews, from Jews holding too much power in countries they have assimilated into, to Jewish conspiracies, Jewish greediness, and many others. However, the root reason is in what made the Jews “Jews” (i.e. “united”) to begin with: that they once realized a method of connection above human divisive drives, which became the solution to the problems in human civilization, and today they’re expected to do that again.

As human society accumulates more and more suffering and negative impressions toward the realization of its helplessness and desperation — that none of the so-called “solutions” it has to offer, whether it be new policies, laws, weapons, or technologies, will work to society’s lasting benefit — the subconscious demand upon the Jewish people to implement the method of connection they once attained grows.

At this moment it is difficult to relate mass shootings to the role of Jews in the world, but the root of the frustration, hatred and despair that leads to such manifestations is intertwined with the potential that the Jewish people hold to tilt the scales one way or another, to become an example to follow.

Therefore, as soon as we Jews become a force capable of establishing unity above the ego and social division, we will spare the world and ourselves from further suffering, and moreover, will bring about an abundance of happiness, confidence, and harmony in humanity on a whole new level that we have never experienced before. It is my hope that such positive change will happen sooner rather than later.

This article is Part 2 of a series. To read Part 1, Click Here Now.

The Structure Of The Universe, Part 6

Question: Is all that we people receive today uncontrollable processes? I have a desire to receive, which comes from the outside, I don’t even know where these thoughts and desires suddenly arise in me. Do I have no freedom of choice in this?

Question: Then what is next is that we come to the fact that a person must have a power that restricts reception, controls his desires, called a screen?

Answer: The ability to control oneself lies in a special action, when I can conceal myself from the Creator, cut off my direct connection with Him, and cut off His instructions that I instinctively followed. I believe that I cannot do it now. I make an action called restriction (Tzimtzum), ostensibly cutting myself off from the Creator.

Only to the extent that I can connect with His actions, accept and fulfill them, based on my desire to be like Him, can I receive.

That is, as He gives, I also receive. I cannot get away from it; I still continue to be a receiver, but my receiving already has a completely different form when I decide that I need it in order to be similar to the Creator.

If the Creator gives, emanates from Himself, then my action of bestowal to Him lies in the fact that I, after the restriction, open myself in a certain way, to a certain extent, and receive pleasure from Him with clear understanding that I do it to please Him. That is, in principle, against my will.

Answer: Yes, and then, if I uncover myself, this is called the conscious reception of light or a special connection with the Creator.
[248163]
From the TV program “Basics of Kabbalah,” 11/27/18

Is There An End To Studying Kabbalah?

Question: Is there an end to studying Kabbalah?

Answer: No. The end to studying lies in infinity. Even after we leave this world, we continue our attainment in the upper world, outside of our bodies. So do not worry, everything is still ahead.

Question: What final state should a person arrive at?

Answer: The final state is full connection with all created beings and with the Creator in a single union, in a common desire.
[248762]
From the Kabbalah Lesson in Russian, 3/10/19

Related Material:
Bad Deeds And Spiritual Development
The Purpose Of Creation
Can We Influence The Upper World From This World?