#Hungary has the highest level of #Antisemitism in #Europe. 7.5% of carriers of the #Jewish genes live there—the largest share of Jewish genes in the world after Israel, twice the number in the US. It is as if having one Jewish grandparent.
That is why Hungarians are the biggest anti-Semites!

We advance step by step: I rose and fell—”And there was evening and there was morning—one day.” Each and every time, we build a new state by losing everything we received before. If we’d remember and preserve the previous state, we wouldn’t be able to acquire a new one. I have to fall—”Shimon from the market”

The lower one receives everything from the upper one: this world and the upper world, and the means to ascend.
What remains is to discern how to relate properly to the external and internal states, meaning to the group, the world and myself, and then incorporate myself into the group and annul myself.

Self-annulment can be passive or active, at various degrees, in changing conditions. But the experience we must accumulate from all the states we go through is the ability to annul ourselves of our own choice. I must know why I annul myself and before whom, and how, in return I acquire the group, the world.

For now we cannot do anything besides self-annulment, nullifying ourselves more and more. All correction comes down to this: until its very end, until the “coming of the Messiah,” the light “Rav Poalim Umekabtsiel.”
All our actions are to annul ourselves because we are working on egoism’s correction.

By nullifying myself, I adhere to the Creator’s self-annulment and attain Him through His self-annulment. By annulling myself for the sake of connecting to Him, I start to understand how He annuls Himself—and thus I study the upper one. It is also important to annul yourself to the right people, but never to the egoistic world.

Free choice is the choice to connect among each other and by doing so, reveal the upper force—the force of connection and love—here in this world. If we fail to make that choice, then the negative side of the force of connection and love—division and hatred due to egoistic desires growing without any effective regulation—will ripple out to all humanity in depth and width. This is the root of any positive or negative attitude toward Israel from the nations of the world.

Question: The entire history of humanity is a process of development of human desires. Baal HaSulam writes in his articles that both in nature and within a person there are four levels of desires: inanimate, vegetative, animate, and human. Therefore, we see these four levels outside of us.

What are these desires and how many of them are there, in quality and in quantity?

Answer: In principle, the desire to fill oneself is common to all levels of nature. What to be filled with depends on the deficiency the desire feels and on what will give it the feeling of fulfillment and pleasure.

If this desire is at the inanimate level, then it wants to realize itself as it is. At the same time, it is not able to add or subtract anything from its desire but only acts in the same way it exists. This desire is called inanimate. It cannot develop, but wants to fulfill whatever it feels it is lacking, that is, to get closer to something, to distance itself from something. It works in this form.

Then the desire develops from the inanimate level to the vegetative one.

In the vegetative level, there are already changes in the desire itself. It grows, changes its form, creates all kinds of auxiliary desires and tools for its own realization. Therefore, it develops lengthwise, in breadth, grows, moves toward the sun, air, and water. It acquires the ability to control its initial desire in order to realize itself. This desire is called vegetative.

However, it cannot move from its place; like a plant, it grows in the same place it was planted. It can spread from there, but its initial root remains where it was planted by the upper force, something or someone external. It continues to develop from this state.

Yet, this type of desire can reproduce, influence the environment, and be influenced by the environment. It is like plants that interact with the four states of nature: winter, spring, summer, and autumn. The inanimate desire, however, does not have this ability.

The vegetative desire differs from the inanimate by the fact that it spreads, but so far, it remains at the same place it exists.

The next desire is the animate. It already can move from place to place, meaning that it has freedom of movement. Naturally, its reproduction is much more complicated and consists not of the same states as the states of a plant but requires connection with others.

In the animate desire there are male and female individuals that move, build a family between them, actively search for sustenance, and so on. There is already a fight for a place, for a species, and for a female here. That is, this desire has a whole set of tools for realizing itself in an optimal way.

The next level of desire is the human who contains all the previous desires. In addition, he has freewill in their implementation, and he can move, combine, move away, approach, and change his goal for what and how he can develop.

The human is not limited in his desires and their fulfillment, everything depends only on him. Therefore, his desires: inanimate, vegetative, animate, and human, give him complete freedom. He is the leader, he is the king of nature.
[248960]
From KabTV’s “Basics of Kabbalah” 12/3/18

Filed under: Egoism, Structure of the Universe - No Comments → 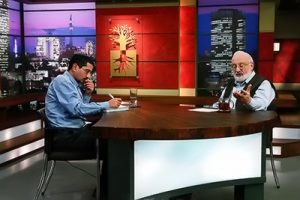 Humanity is being born into a new dimension in which society will be integrated and all levels of existence will get along. We are in transition, just like a fetus before birth. This crisis is unpleasant and we feel mutual pressure, just as with labor pains. Human desires have grown and brought us to this dead end where we cannot get along in the family or at work. Everything has become a misunderstanding and is in a state of disorder while, at the same time, we are discovering the inevitable interconnectedness and interdependence of all life on earth. The only solution is what is called “Shalom Bavit” or domestic peace that occurs when everyone, including all peoples and nations, search for mutual wholeness.
[66473]
From KabTV’s “New Life #1 – Toward a New World,” 12/27/11

Writings of Baal HaSulam, “Preface to the Wisdom of Kabbalah,” Item 11