Street Naming After The Rabash

Today, on Friday, August 16, 2019, the street upon which the central building of the Bnei Baruch Kabbalah Education and Research Institute is located—called in Israel, Kabbalah L’Am –Bnei Baruch Association—will have its name changed to “Rabash Street” in commemoration of the great Kabbalist Baruch Shalom HaLevi Ashlag (the Rabash)—a decision made by the Municipality of Petah Tikva, headed by Rami Greenberg.

Rabash was a special Kabbalist who acted for the unity of all the people of Israel: religious and secular, all races and factions as one. He was very concerned that the true Torah of Israel—unity of the people—would reach the ears of all people and increase unity in society: a power capable of healing all of the world’s problems.

As a result of Rabash’s many years of devoted work, a group became established—men, women and children—who wanted to realize the vision of Kabbalist Yehuda Leib HaLevi Ashlag (Baal HaSulam), as he specified in The Writings of the Last Generation: a vision of a corrected and unified human society. This group became known as “Bnei Baruch” (i.e. “the sons of Baruch Shalom HaLevi Ashlag [the Rabash]”). We, as members of this group, understand that it is a long path, as Rabash himself described in his first article, that “although we have not yet achieved this goal, we have the desire to achieve it. And this, too, should be appreciated by us, for even though we are at the beginning of the way, we do hope to achieve the exalted goal.” (Rabash, “The Purpose of Society,” 1984.)

We—the members of Bnei Baruch, the students of the method of connection and the wisdom of Kabbalah that Rabash received from his teacher and father, Baal HaSulam, and passed down to us—have a strong will and determination to continue the path of our teacher. We are currently in a lab-like environment, learning upon ourselves how tocreate a new unified society and increasing our understanding of what that means, because we are still unworthy of being such a society.
Rabash is our teacher, the source and fountain from which we have received our entire method. Therefore, we are very moved and delighted that the residents and municipal authorities of Petah Tikva recognize us as a positive force and valuable addition to the city, deciding to change the name of the street where our world center is located, to the name of our teacher, Rabash.

We will endeavor to give back to the city’s residents, and to all who know our teacher and what he stood for, our maximal efforts to realize our teachers’ vision of a new unified society. I very much hope that we will reach a state where Rabash’s great name will be promoted in the world, as the one who opened the path of Torah, the method of correction, and that his method will bring about the unification of human society in Israel and around the world

Today, on Friday, August 16, 2019, the street upon which the central building of the Bnei Baruch Kabbalah Education & Research Institute is located—called in Israel, Kabbalah L’Am –Bnei Baruch Association—will have its name changed to “Rabash Street” … 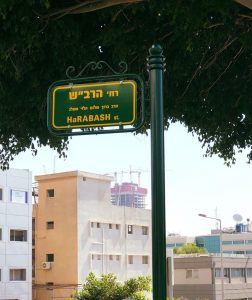 ….in commemoration of the great Kabbalist Baruch Shalom HaLevi Ashlag (the Rabash)—a decision made by the Municipality of Petah Tikva, headed by Rami Greenberg.
Full post
From Twitter, 8/16/19

“Do You Support The Existence Of Israel? Why?” (Quora)

Michael Laitman, On Quora: “Do you support the existence of Israel? Why?“

I support the existence of Israel as a source of the world’s connection. Through the special connection that Israel has the potential to bring—a connection above people’s innate divisive drives (“Love covers all transgressions” [Proverbs 10:12])—the world can elevate itself to another level of existence, both corporeally and spiritually:

Corporeally, this means that all human conflicts and natural disasters would cease. We would feel a life filled with happiness and confidence as a result of the balance with nature that such connection would yield.
Spiritually, it means we would rise to a new dimension of eternity and perfection. This is due to awakening the force of connection and love dwelling in nature to reveal in our newly-created connections.
Therefore, yes, I do support such a nation’s existence.

Today, it is very sad for me to see the contrary, how Israel is the source of all of the world’s problems (“No calamity comes to the world but for Israel” [Yevamot 63]). That is, the more that the people of Israel fail to apply efforts in the direction of connection—connection above our differences for the sake of positive global connection—the more the world sinks deeper into division and conflict. It is as Kabbalist Yehuda Ashlag (Baal HaSulam) writes in item 69 of his “Introduction to The Book of Zohar,” that “they cause poverty, ruin, robbery, killing and destruction in the whole world.” Why? It is because the people of Israel possess the method for the correction of human nature, i.e. correction of the egoistic, self-centered drive to benefit at the expense of others, which is growing rampant in our era. The more the ego inflates without an effective form of regulation—the connection above differences that the people of Israel have a method and a role to realize—the more problems and crises abound in the world.

Moreover, the more the nations of the world feel problems in their lives, the more they feel hatred toward Israel. This is because they subconsciously feel that the people of Israel are the source of their problems and are holding something significant away from them. Anti-Semitism and anti-Israelism thus rise due to the people of Israel’s failure to implement the role required of them in the world.

Therefore, the people of Israel need only come to the realization that they hold their own as well as humanity’s life and well-being in their hands. By starting to tilt the scales toward connection, they will bring harmony to themselves and to the world, whereas by continuing to tilt the scales toward division through their indifference and rejection of their role, they will continue inviting problems to the world and hatred to themselves.

It is thus my hope that the people of Israel will acknowledge their role and start making efforts to connect sooner rather than later, because if things keep developing as they currently do, then we will experience wars and major suffering on a whole new level of egoistic relations the likes that we have never seen before.

Remark: In our desires, filling is felt only for a short time, and then disappears. This is most problematic.

My Comment: The fulfillment does not disappear, but is simply suppressed by other desires because they change in us all the time.

Since we have a huge number of desires, they are in a certain relationship with each other, and their constant correlation does not give us rest.

Therefore, we forget the past and are already thinking about the future. The impression disappears. Although we wish to return to it, we are no longer able to.

Question: That is, the filling is not static?

Answer: No! Filling exists in desire. Desires change and always overflow from one to another in all kinds of combinations. After all, a person has a huge number of desires. Therefore, we constantly feel changes in ourselves.

Question: Why, when the filling disappears, do we feel doubly empty?

Answer: If there were no filling, we would feel ourselves in its absence. Since the filling has already been and is gone, then we feel the absence of filling and the absence of this place as filling, meaning doubly empty.

Suppose if now I am at level zero, feeling a certain lack of it, emptiness, and then I am given filling, say, two million, and then this filling disappears, then I feel the lack of filling for two million plus what I had, meaning what I have lost. I do not just feel zero, but I feel “minus two million.”
[248970]
From KabTV’s “Basics of Kabbalah,” 12/3/18

Filed under: Egoism, Structure of the Universe - No Comments →

Lesson on the Topic “The role of the people of Israel”