The thought of creation includes everything in it—even me, but I strive to attain it on my own. The Creator gave me such an opportunity, as if He created a white spot in me called “desire for the Creator.” And I develop this desire and direct it toward the Upper one.
#kabbalah #wisdom

President #Macron: “It is necessary to create a new system of international relations since development has come to an end, democracy has gone out of fashion, and capitalism has gone out of control.” It is true: we have to create a system of good relations between everyone to resemble the Creator in this way. Then everything will work out.

Creations are able to attain the thought of the Creator when it is separated from the Creator and acts independently. Within this thought appear: 4 Phases, Partzufim, the worlds. In practice, it comes out of the black dot, which includes the whole thought of Creation in its potential, the entire process, which is predetermined.

It is like a movie running inside this dot. All of us, the Universe, all the worlds are in that black dot. The attitude of the Creator, the Upper light, is the thought of creation, which is nothing but a thought that started the whole Universe. Our reward, all the efforts, and everything we go though on our path are imbedded in it.

A black point—creation, during the course of its development comes to self awareness, and from that state to the awareness of the Creator, to understand where it comes from, who created it, and who is developing it.

From the standpoint of the Creator, a potential action, called a thought, is sufficient. For Him, the end of the action is in the original thought, i.e., the uncorrected and corrected states of creation exist together, forming a black point—creation.

There is none else besides Him. We realize this fact from the opposite, from many contradictory actions of the Creator toward us. These discrepancies advance us by connecting the opposites. It is impossible to attain Him other than through two opposites that connect and complement each other.

We need to attain the Creator’s plan for creation, and then we will reveal—not Him, but His attitude toward creation. Only this single thought exists. And all the various contradictory qualities that we feel are there to reveal the depth and oneness of this thought.

Science is approaching the fact that Kabbalists revealed long ago: that there is nothing in the universe besides the plan of creation, and we are inside of it. Although we divide reality into forces, matter, feelings, and reason, essentially only the Creator’s thought operates, inside of which we exist.

“Everything is resolved in thought” and everything is created by thought. There is no matter—all of reality is incorporated in thought. Materialist-scientists also say that the Universe is a thought. Brain researchers assert that our thoughts are outside of a person and the brain is a device that picks up thoughts.

This thought constitutes all of creation and its plan, and there is nothing besides it.

There is nothing besides the single thought of the Creator—the plan of creation, which incorporates everything. We, the creatures, do not understand or feel this yet, that we are inside of this plan and are managed by it. All of our work takes place inside of it.
From Twitter, 8/27/19

Question: You say that the future depends on us, but our destiny is predetermined. How are we to understand that?

Answer: The fact of the matter is that we all must reach the state of the final correction. It is already predetermined. Moreover, we already exist in it.

Now we need to realize this future, bring ourselves closer to it. How we do it—the fast way or the slow, we strive forward by ourselves or urged by nature—depends on us. But the future already exists.

This is the state we were in before the breaking of the vessel of our soul and now we have to get back to it. We will not get away from it, we will be obliged to take each of our points, our cell, you, and I, and everyone else.

But the road by which we reach this predetermined future does not exist, it depends precisely on us. It depends on us how quickly we will be able to achieve this goal, how fast can we reach it, how comfortable our way will be.

We absolutely have to reach its predetermined end where all the parts of the soul will meld into one common system, into one whole, and the Creator will fill them infinitely with the upper light. We must get to this state.

Question: You frequently mention that there is spiritual information, Reshimo, in a person. Does it really exist in us?

Answer: There is a Reshimo in a person, a record of all states that this person needs to go through from the beginning till the end. But the person determines how he will go through them: fast or slow, comfortably or through blows.
[249830]
From the Kabbalah Lesson in Russian, 4/28/19

Related Material:
What Determines The Future Of A Person?
The Only Factor That Determines Our Future
From What “Point” Does A Kabbalist Make A Prediction? 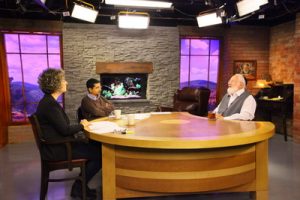 New Life 1133 – The Need To Be Loved
Dr. Michael Laitman in conversation with Oren Levi and Yael Leshed-Harel

The need to be loved stems from the obligation to be on good terms with the factors that are important for my positive existence. Love means gathering everyone back into my heart, in spite of our differences. The purpose of life is love, and when a sense of lack is filled, it produces a sensation of the essence of life. All of our relations are built upon connection and separation or engagements and lapses. In the end, we must feel connected as we were originally, like one. Spiritual love occurs when we don’t demand anything back, to the point of total devotion, simply because it is important to love. In this way, we develop love for all of creation and even for the upper force that created us.
[249172]
From KabTVs “New Life 1133 – The Need To Be Loved,” 7/2/19

Lesson on the Topic “There is None Else Besides Him”