The Structure Of The Universe, Part 3

Question: What is the difference between the first degree of development of desire and the last? After all, they both want to receive.

Answer: Naturally. But the fact is that the receiving in the first degree of Hochma is instinctive, directed and binding, since it was created this way from the Keter. Creation in this state simply acts because it is forced by inner qualities.

When in Bina, it stops communicating with its source, Keter, since Bina refuses to receive, it breaks off the stream of pleasure, control emanating from Keter, then the creation itself begins to determine what is important to it. This creates a new desire, Malchut, which is determined by its own striving.

Question: That is, it is an independent desire, but the first degree is not?

Answer: Yes. This can be compared with you simply filling something inanimate or something that requires, asks, and aspires to be filled.

Question: Let’s say, in the example with food. If I were given a dish that I have never eaten before, then although I have a desire to receive, I still don’t try to eat it. Only after I tried it, do I have my own desire for this dish.

Therefore, as far as I understand, the four degrees of the development of creation are the essence of the whole Kabbalah?

Answer: The four degrees of direct light speak of the creation of the creature, desire. But this creature, in principle, feels that it desires from itself. The property of Bina separates the creation from the source: on the one hand, Keter, that fills, on the other hand, Malchut, that receives. Bina sort of cuts them apart. 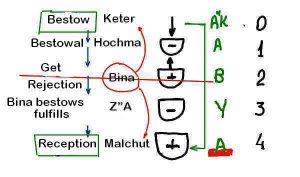 The fact is that creation is not yet independent. It rushes to what Keter wants to give it, but at the same time does not control its desires. To control your desires means to be above them, to rise to a higher level; when you control, you create your desires, not that desires control you.

Thus, the whole of creation begins with the four stages of direct light. Moreover, the last degree, Malchut, finally filled with all the pleasure, that is, the light from Keter, is called Malchut of the World of Infinity because its fulfillment is absolutely infinite: it receives as much as it desires and is fulfilled by that.
[247892]
From KabTV’s “Basics of Kabbalah,” 11/27/18

Are Anti-Semitism And Anti-Zionism The Same? How Are They Similar? (Quora)
Podcast Powered by podPress (v8.8)