The spiritual realm is ruled by the system 10=1; less than 10 doesn’t exist. The Creator said, “I came, but there isn’t a single man.” This means there are people, but they aren’t united as one. Hence there’s no spiritual quality and the group doesn’t exist in the spiritual sense.

The plan of creation contains the entire program of correction till the final state. But the system doesn’t get launched without our consent. We don’t create anything new, “There’s nothing new under the sun,” but we attain and launch the stages of correction.
The novelty in the system is me, who manages the correction.

In the initial state of the soul of ADAM, the capacity of the parts’ connection on the NaRaN degree is 620 times less than the planned final one since it was connected only by bestowing desires. Whereas we attain the full connection of all 600,000 parts of the soul …
… with receiving desires by the light of NaRaNHY.

In the beginning the system of the common soul of Adam HaRishon broke and disintegrated into parts. These parts are us, and we must look for ways to reunite. Inside each broken part, instead of light there is a part of the screen, a spark pulling us toward unity.
We must “fan” it and unite.

Moving toward each other, sparks of the parts of the soul unite into families, communities and nations, and then connections as well as quarrels arise between them. They invent religion, science and cultures. Eventually they start to feel that nothing allows them to connect properly,
and thus they come to Kabbalah.

Throughout all times people aimed to build a better future. This is why they got married, studied and built things. Most importantly, they had plans! Today the world’s finite nature is becoming apparent: terrorism is heroic and drugs are used to foster the imagination.

The #future is gone. This befits a beast, but not a human being…

The continually growing egoism is bringing Europe to the inability to find common solutions. Europe aspired to unite, but today nationalistic trends are manifesting. Germany is full of refugees and fears losing its stability and identity. Europeans are losing their place in the world.
From Twitter, 11/26/18

It Won’t Be Boring

Question: What should be done with the animal within myself? If it reaches a certain goal, it loses interest in what it achieved, finds a new goal, and everything begins all over again? What is needed for the development of the point in the heart?

Answer: The point in the heart is the attraction to the meaning of life, to the attainment of something unknown. It exists in everyone. It all depends on how much it manifests itself: to a greater or lesser extent.

Question: What if a person gets bored? It seems to him that he hears the same thing and there are no changes.

Answer: We have a vast amount of material, so I doubt that anyone will get bored. The material explains many things in life that it is impossible to say that you know everything.

In addition, it is emotional material under the influence of which you change daily, become disappointed again, and then rise again. That is, these are states that do not cease in their metamorphoses until the final correction.
[236476]
From the Kabbalah Lesson in Russian 7/1/18

Related Material:
Create A Human Within Yourself
Paradise For An Animal—Exile For A Person
Enough With Feeling Bored, Let’s Start Working!

How To Get Inexhaustible Energy?

Question: What is the energy balance of renewable energy sources? Do they supply more energy than is required for their production?

Answer: We use all types of energy received from nature in the amount of one or two, with the maximum five percent of their possible productivity. This is because we use nature egoistically.

But if we treated nature altruistically, if we could work with nature according to the same principle that it relates to us, in a balanced way, then we could receive 100% of the desired from nature in exchange for relating to nature 100% on the same level.

Nature treats us altruistically, and if we also related to the whole world, to all of humanity, in a reciprocal way, with love, according to the principle “love your neighbor as yourself,” then we could extract from nature much more energy, we would reach balance with nature, and would not feel lack in anything.

We would harmoniously and integrally join nature, and would receive a positive reaction from it instead of a negative one. Today, nature shares with us as if reluctantly, as if it is obliged to release a small part of its energy resources to us.

Yet, once we reach equilibrium with nature, we will be able to receive inexhaustible energy implanted in each atom. Thus, in essence only in this lies the correction of the existing methodology and solution for the future.
[236347]
The Round table of independent opinions. Berlin 9/9/06

Related Material:
The Source Of Infinite Resources
Softening The Domination Of Nature
The Next Phase Of Human Development

Why Do People Suffer?

Question: From the point of view of Kabbalah, why does a person suffer and what for?

Answer: A person suffers because he does not want to reveal the upper world he exists in but does not feel.

He suffers in order to develop his own desires in himself, because according to these desires, the capacity for its revelation will be disclosed. Therefore, we have no other possibilities to reveal the upper world without effort.

And for each attainment, it is clear what sort of effort you must make. At the same time, our ego will resist and force everyone to give a certain amount of effort. Without this, we will be unable to determine the size of the revealed picture, its depth, and all the colors and properties that determine this state.
[236264]
From the Kabbalah Lesson in Russian 6/24/18

Related Material:
Why Do We Suffer? Part 4
How Does One Become Free From Suffering?
Be Thankful For Suffering? 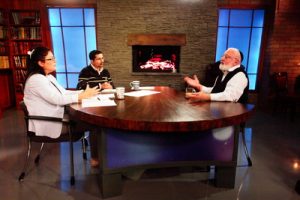 Childbirth is a very painful process that ends with great joy. During labor, the mother should prepare herself mentally by thinking: “I am being born now together with my child into a new world.” The world develops by becoming rounder or more connected just like an embryo in the womb. Birth is the connection of the embryo to the world in a more developed manner. The embryo receives “life’s software” in the womb and develops it in the world. In one’s efforts to exit the womb, the embryo discovers that the world is comprised of two forces: giving and receiving. Our world leads us toward birth. Mothers who understand this pass that onto their embryo and improve the life of their child.
[108565]
From KabTV’s “New Life 102 – Pregnancy And Birth: Preparation For Childbirth,” 11/13/12

Lesson on the Topic “How Do We Organize Ourselves For Prayer”

Preparation for the Virtual Convention 2018