The Times Of Israel: “Why Israel Must Fight On Two Fronts”

The Times of Israel published my new article: “Why Israel Must Fight on Two Fronts” 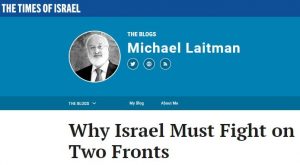 There is no doubt that the next round will be more painful. We took a serious step backwards, against ourselves and against the safety of our children. Hamas, on the other hand, is celebrating their success in sparking a political earthquake in Israel, after the resignation of the defense minister. They — and the entire world — have concluded that Israel is weak.

All of us without exception — leaders and soldiers, politicians and citizens, rightists and leftists, religious and secular — must be vigilant against the enemy within us, the snake that separates us from each other. Only when we join forces against our own division will we reawaken the spiritual foundation of our people.

According to the wisdom of Kabbalah, the spiritual connection between us is our only salvation. It will build a wall against enemies. And the whole world is subconsciously waiting for the power that lies in Israel’s unity. Even Hamas.

Question: What would happen if all the Chinese would like to own a car?

We need to understand what is visible in nature and in its research; environmental disasters are caused not by technology, the inanimate, vegetative, and animate levels, but by the human level. Only we, at the level of our relations, cause distress at all other levels of nature.

All these disasters in the fields of ecology and health, depression and drug addiction, divorces and all other problems arise from nature only to push us to understand the cause, which is at a higher level. Always in nature, a problem from a higher level descends to lower levels and activates the system from there.

I hope that in the search for salvation from these evils, which we see as evils at our egoistic level, we will have to give up our egoism, we will have to understand that we can only be in balance with nature on the inanimate, vegetative, and animate levels due to our human level, if we treat each other with love and understanding.

Then, we will bring unity to nature as a whole and reach a balance with the general nature.
[236008]
The Round Table of Independent Opinions, Berlin 9/9/06

Related Material:
Environmentalists In A Panic
The Collapse Of The Climate Conference
The Restoration Of Planet Earth’s Ecosystem

New Life #98 – Pregnancy And Birth From The Woman’s Perspective 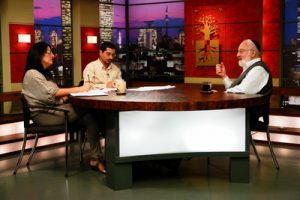 New Life #98 – Pregnancy and Birth from the Woman’s Perspective
Dr. Michael Laitman in conversation with Oren Levi and Nitzah Mazoz

The only way a mother can ensure her embryo experiences peace is by providing a peaceful environment. The embryo feels the mother after 40 days. She therefore has to think about the embryo and treat him as an entity that understands and feels. Since all her thoughts are passed onto the embryo, the mother imagines the type of kindergarten she wants for him, his harmonious relationships with others, and the perfect world she wishes for him to inhabit. Instead of hoping her child becomes a millionaire, she desires that he will be born into a balanced world in which everyone has what they need both in corporeality as well as in spirituality. She will imagine a world based on mutual guarantee in which every child feels happy and secure throughout their lifetimes.
[108067]
From KabTV’s “New Life #98 – Pregnancy And Birth From The Woman’s Perspective,” 11/4/12