The Times Of Israel: “I Too Have A Dream… A World Free Of Anti-Semitism”

The Times of Israel published my new article “I Too Have a Dream… A World Free of Anti-Semitism.”

Early in the afternoon, walking in a busy area of Brooklyn, New York, a Jewish man wearing a yarmulke was punched in the face and kicked in an unprovoked attack by a young black man as caught on camera. Sadly, this is not an isolated incident, but only one of the latest in an upward spiral of anti-Semitic attacks in America perpetrated by African Americans. We explore in this article the basis of this widespread hatred and the source of its unique solution.

Just recently, a 26-year-old black man was arrested, suspected of being responsible for seven fires set outside Jewish facilities in New York, and for writing anti-Semitic graffiti “Kill all Jews” and “Die Jew rats, we are here,” on a Brooklyn synagogue. Days before, another black man was charged with a hate crime after smashing a Jewish man with a stick in a New York neighborhood, in another unprovoked attack.

Just days after a number of synagogues and yeshivas were attacked in the area, the New York Police Department arrested a group of black teens who carried out a series of anti-Semitic attacks in Brooklyn, including pushing a 10-year-old Hasidic girl to the ground, knocking the hat off a 14-year-old Hasidic boy, and throwing a metal pipe through the window of a synagogue during Shabbat prayers in the Williamsburg neighborhood.

Black anti-Semitism has also emerged in the form of vicious hate speech targeting Jews and Israel. Earlier this year, an African-American city councilman in Washington, DC accused the Rothchilds of being responsible for climate change. Meanwhile, Black Lives Matter endorsed the BDS boycott of Israel, accusing it of being an “apartheid state” perpetrating “genocide.”

However, the vociferous and virulent anti-Semitic leader of the Nation of Islam, Louis Farrakahn, who makes no effort to hide his inflammatory thoughts, overshadows all other African-American Jew-hatred. He recently compared Jews with termites, preached from his pulpit that contemporary Jews are “not really Jews but are in fact Satan,” and constantly incriminates Jews as evil conspirators.

Why have Black-Jewish tensions escalated?

Blacks and Jews, as minorities in the US, have a long history of fruitful cooperation dating back to the Civil Rights movement when they worked hand in hand to advance the ideal of a more pluralistic society. American human rights champion Dr. Martin Luther King, Jr. also had a special bond with Jews and Israel, as he expressed in the late 1960s: “Peace for Israel means security, and we must stand with all our might to protect her right to exist, its territorial integrity and the right to use whatever sea lanes it needs.”

What has soured relations between the African American and Jewish communities since then? From the moment Jews began to establish their status in American society through hard work and taking full advantage of every window of opportunity, the relationship between Jews and African Americans began to change. Blacks felt left behind and grew increasingly frustrated.

Within many American circles there is insidious anti-Semitism, and Jews are portrayed as the oppressors of the unprivileged, among them blacks, accused of being rich at the expense of the disadvantaged. Such claims have thrown fuel on the flames of frustration and resentment from the black community, inciting anti-Semitic sentiments.

However, we must take care not to generalize about the tensions between the Jewish and African American communities. It is also true that a black-Jewish alliance has been established to fight racism and anti-Semitism in light of the revival of the White Supremacists movement in America. The real problem is that nothing ever seems to palliate the ogre of anti-Semitism. The truth is that, while the underlying root of anti-Semitism has caught some American blacks in its branches (along with many others), to eradicate the hatred, we must grasp its root.

The greatest Kabbalist of this generation, Rav Yehuda Ashlag, understood exactly why anti-Semitism obstinately persists and explained it sixty years ago: “It is a fact that Israel is hated by all nations, whether for religious reasons, racial reasons, capitalistic reasons, communistic reasons, or cosmopolitan reasons. It is so because the hatred precedes all reasons, but each [person] merely resolves one’s loathing according to one’s own psychology,” (Yehuda Ashlag, “The Writings of The Last Generation”)

The wisdom of Kabbalah studies the fundamental forces of nature and explains that there is an ironclad law within nature that cannot be changed. One can only study this absolute rule and learn how to act upon it, but never attempt to violate it without extreme consequences. What is this supreme law of nature?

Kabbalists throughout the ages explain that all of humanity is contained within one harmonious system of inter-relations in which two opposite forces operate: positive and negative. The negative force is the same rejecting egoism that distinguishes and separates people, the same urge that causes racism and hatred of the other. Against this repelling force within each of us stands the positive force that encloses, connects and unifies all the various parts of the system.

Opening the Pipeline of Harmony in the World

Since receiving the law of human interaction within this system at Mt. Sinai, it is as if Jews hold the microphone for communication within the system like a kind of microprocessor that reverberates to all humanity. In their hands is the method of connection, the wisdom of Kabbalah. Once the Jews unite, the same positive force radiates outward to the entire world. But, as soon as the Jews let the egoistic force within nature manage them, the irrational-seeming hatred of anti-Semitism is aroused in all the organs of the system, in all countries, forms, and skin colors.

Like a body involuntarily gasping for breath, the world unconsciously pressures the Jews to deliver the solution to humanity’s problems. Tragically for all, instead of drawing down the breath of life for them, Jews obstruct the airway that carries the goodness to the world with their swollen pride, choking infighting, and self-centered disregard for the health of the body of humanity.

Black anti-Semitism in the US is one unpleasant symptom of a much more invasive disease. Therefore, before the disease enters its acute phase where cases of anti-Semitism and anti-Zionism erupt in full force everywhere, pushing Jews to unite, it is imperative that Jews fulfill their duty to humanity and open the conduit of fulfillment for all.

Within this act, Jews will bring peoples of all kinds and colors closer. There will be no Jewish-African American divide. At that time, anti-Semitism will disappear throughout the world and our shared dream will become a tangible reality. As Rabbi Eliyahu Ki Tov wrote, “We are commanded at each generation to strengthen the unity among us so our enemies do not rule over us.” (The Book of Consciousness).
[236761]

New Life 1064 – Inner Resistance Is A Stimulus For Human Development 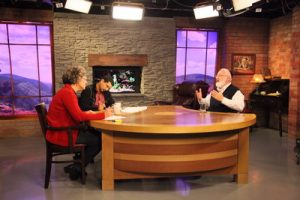 There is nothing bad in the world. Everything that happens can be used for the positive advancement and development of humankind. When something happens that is not exactly what I want, it awakens resistance in me because it undermines my ego. In the wisdom of Kabbalah, a person encounters all kinds of resistance and this promotes his spiritual ascent. In order to correct ourselves, we must see others as emissaries of the upper force and learn how to absorb contrary opinions. We must see everyone as puppets of the Creator and behave as though we are relating to Him in every scene.
[234218]
From KabTV’s “New Life 1064 – Inner Resistance Is A Stimulus For Human Development,” 10/2/18