Yesterday in the daily Kabbalah lesson, Ahmed from Gaza sent me a question: Why is Israel constantly bombing us? Don’t the leaders understand they’re putting us through hell? Things are bad here anyway. He added with great pain: What can I do spiritually to bring peace and goodness among everyone?

This is a big problem, Ahmed, I replied to him. A very big problem in that we do not understand each other. Even though we are all subject to the same higher force, and we can be brothers, the ego games in politics instigate war between us.

Let’s clarify together the method of correction, we will examine it in depth and simply implement it. The whole method depends on the connection between human beings. I do not blame the Jews or the Arabs here, as long as we, the two peoples, have not changed or understood what is before us. Governments are only an expression of the nations.

Therefore, I hope that there will be more people like you in Gaza and other places, and we will work together. I will be happy to work on connection together. The correction of the world cannot happen the things are going today.

And what about the bombings? We’ll pray together that it will not happen again. There is no one to blame other than us, those who know what the correction of the world depends on. Therefore, those who hear this must act. If we disseminate to everyone the knowledge that the correction depends solely on the connection between us above all opinions, above all the differences, above all the events of history; if we try to reach a real connection, above the human power, then the world will look completely different. Not only in Gaza but throughout the Middle East, throughout Asia, Europe, anywhere in the world.

It all depends on spreading the awareness that connection is the correction, and in that we have no differences of opinion. This is common to those who believe in the original Islam and those who believe in the original Judaism, that is, the wisdom of Kabbalah. Abraham, our common ancestor, founded both. Yet, over time, each nation turned to its own egoistic direction, and now we must start correcting it. I hope that ahead of us is a mutual and successful process of connection.

Read more about this here >>

Spiritual Meaning Of The Month Elul

Before Rosh HaShanah there is the month of Elul.
An entire month in which we need to check how much
we are drawn to the revelation of the Creator. 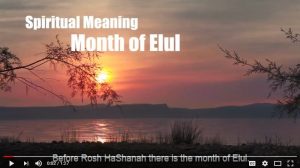 The Times Of Israel: “Seeking: A Spiritual Leader for the Jewish People”

The Times of Israel published my new article “Seeking: A Spiritual Leader for the Jewish People” 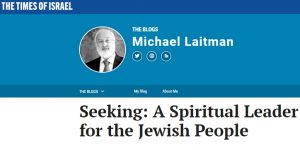 Among all the powerful, charismatic and innovative figures in the Jewish world, it is still missing a great, unselfish leader who is above materialistic interests, one capable of elevating Israel to be worthy of fulfilling its spiritual role in the world.

Here is a bit of Jewish wisdom (Masechet Iruvin, 13b): “All who woos greatness, greatness escapes him. And all who escapes greatness, greatness woos him.” Such was Moses, the ideal role model for a leader. These days, remembering Moses’ unique leadership might be a good lesson for us all, everyone from you and me, and all the way up to heads of states.

“You are saying, ‘And the child grew.’ However, he did not grow as everyone does. …Pharaoh’s daughter would kiss him, cuddle him, and love him as though he was her son. She would not take him out from the king’s palace. And because he was beautiful, everyone longed to see him. One who saw him would not be able to ignore him, and Pharaoh would kiss him and cuddle him. He would take his crown, and Pharaoh would place it on his head, as he was destined to do when he grew up.”

At the same time, Moses was the antithesis of a would-be ruler. He was anything but eloquence, he was an outcast among both Hebrews and Egyptians, and he often failed to understand God, whose message he was carrying. Anyone else would have given up long ago. But not him; he had the quality that we would love to see in today’s leaders: true, unselfish love for his people.

His love enabled him to lead because it connected the people to him and to one another. Moreover, his love eventually implanted a new attribute in them—love of others. When they united at the foot of Mount Sinai, “as one man with one heart,” they became a nation. As long as they continued to adhere to the law of love, always aspiring to follow the motto, “love your neighbor as yourself,” they were able to sustain themselves as a nation.

It is no coincidence that unity precedes redemption. Despite numerous attempts to change it, and despite occasional acts of kindness, at its core, human nature is self-centered. It is something that is very evident these days as we look around us and examine our society, and it is something that was known thousands of years ago, hence the verse, “the inclination in a man’s heart is evil from his youth.”

And yet, a society cannot survive only on egoism. It requires balance between giving and receiving. Moses taught the people not to fight their egos, but to rise above it and cover it with love, as in, “Love covers all transgressions.” Just as today we are losing the battle against our egos, therefore becoming increasingly self-centered, the ancient Hebrews could not cope with it. Instead, Moses taught them how to rise above it and establish a covenant of mutual love that facilitated a just and social model based on mutual responsibility.

Indeed, a leader is first and foremost an educator. Moses educated his people toward loving one another and helped them connect above their egos. The Hebrews united around Mount Sinai, which gets its name from the Hebrew word, sinaah (hate). They did not destroy the mountain of hate between them, but sent the most pristine element in their midst, Moses, to climb the mountain, conquer it, and bring down a law (Torah) by which they would be able to establish love among them.

The Torah tells us that the process of establishing a state of “love your neighbor as yourself” was neither smooth nor easy. But ever since it was given on Mount Sinai, it has not changed. When the people of Israel established mutual responsibility, becoming “as one man with one heart,” they were given the tenet, “love your neighbor as yourself,” the great rule of the Torah. At that time the Creator said about them, “This day you have become a people.”

And while the nation was being transformed, Moses was leading the way, always showing more dedication and devotion to his people than anyone else could muster. Thus, the perfect role model was also the perfect leader. Precisely because he had no desire to rule, no money, power, pedigree (being the outcast prince of the enemy), or even eloquence, but only one redeeming quality—love—he was the ideal leader.

Indeed, only a leader who nurtures brotherly love instead of lust for power and self-esteem can succeed in Israel. Israel’s success lies in its unity, and only such a leader can unite the people. If today’s leaders want to pull the wagon of the Jewish people out of the quagmire of anti-Semitism, they must first and foremost focus on uniting Israel. This will be the beginning of our true redemption—from our own egos.

Question: When does a person hear the invitation from the Creator: “Come to Pharaoh”?

Answer: A person hears such an invitation when he begins to be a partner with the Creator, thinks about Him well, understands that all evil is revealed only for him so that he can correct it and build himself.

Then a person simultaneously needs the Creator and becomes His partner, and they both do the same job because in any state a person is already ready to reveal the Creator in all that happens to him—within himself and in the world around him.

When something happens to him, he realizes that the Creator does it and then immediately turns to Him, prays, cries, laughs, screams, it doesn’t matter how. He only wants to reveal this problem with the Creator and resolve it.

It turns out that each time the Creator reveals a state to a person, He invites him to be a partner. Also, if a person responds correctly to this invitation, he is in constant contact with the Creator, wants to recognize Him beforehand in all that is happening, and only solve these problems with Him, problems that the Creator created for him.

He does not do anything by himself, but uses these problems to ask the Creator to solve them.

It is complicated and necessary to know how to do it according to the principle “permission has been given to the doctor to heal.” We must work with the tools of this world and with the Creator’s means. The right approach matters most. I try to find the Creator in everything revealed to me and understand that He does everything, always posing problems before me.

Moreover, after recognizing and clarifying that the problem comes from the Creator, I ask Him to deal with it. The more I adhere to the Creator, the more I feel that He cares about it.

However, at the same time, I must solve this problem on the material level. It becomes like a doctor visit. In many cases, we go to the doctor, pay money, get medicine and put it in the cupboard without using it. After all, we have already received a cure from the Creator.
[231838]
From the Conversation in Iceland 5/18/18

Related Material:
In Tandem With The Creator
Hold My Hand
The Purpose Of Life Is The Revelation Of The Creator Until now, we thought we could build a healthy society through competition, but it has only led to waste in the army and in the health and education systems, etc. All the systems we had set up to serve us, including the media, have failed due to the intensification of egoism. We must become more efficient and reduce the cost of living or the millions of unemployed people in the streets will force us to do so. We are facing changes in mankind. Our operating software is being upgraded.
[91775]
From KabTV’s “New Life #68 – Money And The Social Network, Part 2,” 9/5/12