The repentance that one must reach in the month of Elul is revelation of desires inside you that hinder unity. It’s enough to reveal them—and they are corrected at that very moment. If I consider them a sin, through that they are corrected by the light that reforms.

It is written that it makes no sense to ask the Creator for forgiveness until a person repays all his debts to people. If we establish good relations between us and provide the Creator with a place to reveal Himself, this will be our appeal to Him and a request for forgiveness.

We live increasingly longer.
-What for? We’ve learned to take care of our bodies. But what is the purpose of my existence? Mankind has no answer to this question. Hence life is easier but harder.
The question “What is the #purpose?” pushes mankind to learn the governing system.

Trump announced that Israel will have much to give up for the sake of peace. Everything he does is to achieve his own goals. And he is right! Kabbalah says: If we don’t unite, we won’t ensure the support from Above for us—we will help our “friends” and foes to break and destroy us!

The UN Secretary General Guterrish proposed a set of measures to protect Gaza Palestinians. So he stresses that the UN acts solely to protect Palestinians. The UN goes forth towards the elimination of #Israel.
Kabbalah says: If we don’t unite as the nation of Israel, humanity will annul us!

Trump: Let’s make America great!
The US economy grows; money flows into the dollar; profits rise;
Inflation’s low; business optimism’s high; money streams into US.
Profitability on domestic market pumps out assets from the world.
The US is getting a return on what it’s given to the world.

Both the righteous one and the sinner live in one person. The Torah speaks only about one man; everything else is an imaginary world. Hence, all righteous and sinners, pure and impure forces—the entire system is within a person. He needs to unlock this system and tune it to the goal.

“Avoid falsehood and truth, too, shun”—all that is given is to BRING you to the proper analysis. You can’t judge since the decision is always a step higher than where you are. The upper rung defines the lower and that’s why it brings you all the problems. The solution is ascent!

Nature has strict laws. The commandment “FOR HE WILL NOT FORGIVE YOUR FAULTS, AS MY NAME IS ON IT” is an ecological commandment. In the integral nature your right is to receive from it only as much as your “animal” requires. An ecological balance is part of the spiritual balance.

The spiritual path starts with an inspiration! But later it vanishes, because desire doesn’t receive fulfillment. Most leave Kabbalah; those with the true desire to attain the Creator stay. They ask not to receive from Him or get Him revealed, but for a chance to bestow to Him.

RoshHashanah/NewYear symbolizes a person’s entry into spiritual work. It’s preceded by the month of Elul– tuning into connecting to the Creator. “I am to the Beloved and the Beloved to me”—from the initial study of Kabbalah to a full realization of total dependence on the Creator.
From Twitter, 8/23/18

Question: Money rules the corporeal world. Ambitious people own more and exploit others. What is the spiritual root of this phenomenon? Also, why do people think that a spiritual person has to be poor? I do not see any spirituality among poor people. On the contrary, I see more envy, lack of culture, poor education, and so forth.

Answer: According to Kabbalah, being poor has a totally different meaning. A spiritual person feels that he is poor because he lacks the attainment of the Creator and the upper world. He constantly aspires to this.

The notion of “poverty” itself does not come from a lack of money, but rather from religions that call people who constantly think about spirituality deprived and poor.

There is no doubt that wealth above the ordinary needs also enslaves a person. Such people are unable to study Kabbalah since they are too busy taking care of their wealth.

Question: What is the spiritual root of money?

Answer: The root of money is the screen. “Money (Kesef)” comes from the word “Kisuf” and it means cover.

Money is a force that covers our egoism and lets one act above his egoistic desire. If I act correctly, I can do a lot of beneficial things in our world with the help of money. However, usually a person succumbs to the power of money and sells out to it.
[231438]
From the Kabbalah Lesson in Russian 4/1/18

Related Material:
Tested By Wealth
Be Rich!
Beware Of The Poor Because They Will Bring Our Salvation

The Science Of Matter Transformation

Question: How would you explain what the science of Kabbalah is to a simple person?

Answer: Kabbalah is a science that speaks about everything in the world because it studies matter that undergoes all kinds of changes in itself until it reaches complete similarity to the Creator, complete inclusion in the Creator, into the upper Light, the property of bestowal and love.

Matter that has reached the state of complete correction, ends its transformation. In the near future, this should be achieved by absolutely all of humanity, and after it, by all the lower forms: animate, vegetative, and inanimate.
[231472]
From the Kabbalah Lesson in Russian 4/15/18

Remark: Our generation is called the “Selfie Generation.” People fall from bridges, rocks, get into accidents and want to capture these moments.

My Comment: In principle, a lot of people work for death. Death is a dear point in our existence when I leave after me something I wish will remain related to my name to feel some kind of eternal existence.

Question: What does this narcissism lead to?

Answer: This leads to understanding that all this has no importance, no value.

Question: What will happen when we come to this?

Answer: We will begin to understand that there is emptiness in the world! It will be very bad! Then we will begin to seek life’s real fulfillment: eternal, perfect, enduring, existing outside the framework we exist in today before death or after death.
[231634]
From KabTV’s “News with Michael Laitman,” 7/3/18

Related Material:
Why Do I Feel Emptiness In This World?
The “Selfie”
The Selfie As A Symbol Of An Era 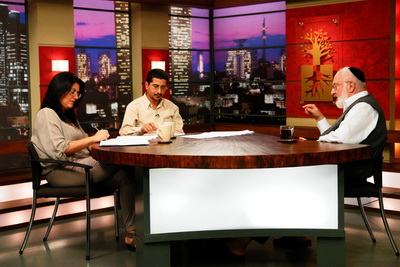 In place of all resources that are being exhausted, the most fundamental resource is emerging: mutual connection. Connection is supernatural and it is the foundation for the proper and balanced use of all other resources. Kabbalah explains how can we realize the connection between us and make the best use of it so that it will benefit everyone.
[91600]
From KabTV’s “New Life #67 – Mutual Connection Is The New Resource,” 9/5/12