Everything Is An Opportunity To Correct Our Desires

Everything happening in the world comes to us in order to give us the opportunity to correct our desires.

All anxieties, fears, uncertainties, helplessness, our experiences that arise from the disorder that exists in every part of this life—personal problems, family, or national concerns—can be solved only by drawing the Creator closer to us.

In every revelation of evil, we must see an invitation to correction and connection between us to such an extent that the upper force is revealed in our connection with ever-increasing strength.

This is how our shattered desires manifest in all possible forms, appearing to us as problems happening to us personally, to the group, and to the world. Correcting them can only be done through unity in the group and revealing the Creator within it.

In this entire work there is but one goal: to understand that everything comes from the Creator in order for us to unite even more and through our unity to correct all problems. In other words, the problems must serve as means for strengthening our unity, and then we will be grateful for all the misfortunes as blessings. It is because they are really blessings—there is nothing bad in the world of the Creator, only good.

We need to see ourselves as engaging in an internal battle with ourselves so that nothing confuses us or leads us astray from the straight path, with the understanding that everything comes from the Creator and with the desire to connect with Him above all problems. After all, connection with the Creator is more important to us than any hindrance.

I alone now decide which way to go: to remain in turmoil and cry, or the opposite, to correctly utilize all disturbances, connect them with the group and the Creator, and bless the Creator for revealing all that requires correction. By this correction we can avoid any danger, even global war. Everything depends on us and we will accomplish this.

There will be no suffering, as it is written: “Look upon them and they turn into a pile of bones.” After all, they are only an illusion; we are being frightened by shadows. Everything comes from the Creator and we are the ones to blame if we cannot turn it into good. Everything is in our hands, you have no idea what immense spiritual power is within us.1

The law of mutual guarantee is a very serious, strict, realistic law. It speaks of a mutual Kli, a vessel, which must be whole. In this whole vessel are all the desires created by the Creator, but some belong to the head and others to the body. If one part of the vessel corrects itself, then by this, it draws all other parts to itself, which also begin to be corrected.

Therefore each individual who received the opportunity to approach the correction of the world, humanity, and the soul, and to the revelation of the Creator, must value it. After all, a joyous opportunity was offered to him or her to actively participate in the building of the eternal and perfect spiritual vessel of the collective soul.

Mutual guarantee connects us to each other through thousands of fine threads. That is how each cell in the body is connected with the entire body. It is possible to build an entire human being from one cell, one genome. And where are there arms, legs, brain, heart, or any of its personal, inner, characteristics in the cell?

But if we delve deeper, we will see that it is not matter within a cell, but spirit. In each element of the body there is a spiritual gene, which contains information about the entire body—not only the body, but the entire creation. We are connected to each other and want the Creator to bring all these connections to life. He shattered them, then let Him fix them. And He is ready to bring them to life, but only in response to our request. As soon as we feel this need and turn to the Creator, He will immediately do it. It turns out that what we need is not mutual guarantee itself, but for the Creator to be revealed with it.2
[225836]
From the Daily Kabbalah Lesson 4/29/18
1 “Strengthening in “There is None Else Besides Him”
2 Baal HaSulam, “The Arvut (Mutual Guarantee) ”

Related Material:
Why The Soul Requires Correction
Correcting The General Soul
The Last Phase Of The Correction

What The Next Generation Really Wants

There is a way to break through out of our egoistic nature, and live in another dimension. Want to see further?—Rise higher,
Above yourself. Don’t obstruct the world with your self—
Then you’ll see the upper world, the world above you!

Kissinger: “What historical period would I compare to the current one? 1938 Germany entered Austria; Jews were told not to leave their homes. German soldiers everywhere. This I’ll never forget! Then the family fled to USA.”
Perhaps it’s his way to remind the Jews of the future.

Henry #Kissinger: “I think #Trump may be one of those figures in history who appears from time to time to mark the end of an era and to force it to give up its old pretenses.”
This doesn’t mean that Trump, actually, knows it or contemplates a grandiose alternative.

Harmony does not require capitulation of one of the parties!
Nature is grounded on the balance of opposites.
Not on the competition, but on mutual complementing!

Love covers all transgressions. One doesn’t exist without the other! We’re all different. If our connection is covered with love, there’s a place for love. If there are no collisions, there is no love. One can be built only above the other; all the constructions—above the ego.

A person cannot help noticing a good example; he can also admire and envy another person. This feeling of envy is very good. It will make one learn something good. He saw and realized how useful it is to him.

It is forbidden in Kabbalah to instruct what to do, in order to preserve individuality. The only thing we can do is demonstrate a good example, and a person will take from it what he may, depending on the level of his development.

The world perceived non-egoistically, outside our senses, is incorporeal. It has no images—only the forces that we find in ourselves. They help us perceive the world in the form of forces and connections of good and evil. The Creator is the property of absolute goodness and love.

Where’s the soul?
Nothing’s created but the soul. It contains all the worlds, including ours, the lowest one, the tiniest of sensations. Everything resides in the soul. The soul’s desire is called its body, and the light fulfills it. There’s no physical world but in our sensation.

Q: So, what is this “faith above reason”?
A: Imagine you are in the presence of the Creator and merged with Him. Now continue living without parting with the Creator, as if He is obvious to you. Persistently gain experience and questions; by getting them answered, you will find Him!

All connections exist between all of us. The breaking, distancing, and concealment manifest only in relation to us, and not in the system itself. The system functions correctly. All the experiences pertain solely to us, so that we can restore the connections by way of desire.

The breaking occurred only in our mind and heart; in fact, it never took place. The entire descent of the worlds and the inverse ascent, the entire spiritual ladder—exist only in our imagination. In truth, we all remain in the same ideal state.

In the Adam system we received satisfaction through of others. After the breaking, everyone finds satisfaction on his own —through others but without their desire. This kind of fulfillment is called “the spark of life,” which revives us until we wake up to mutual bestowal.

The environment can evoke the feeling that there’s something that you don’t have. Even if he owns the entire world, he does not have something higher than this world. There’s void in his soul. The environment can awaken him and explain that he can fill this emptiness in the group

In our desire there’s a part of Adam’s state where we were all connected. This desire isn’t fulfilled. Due to the breaking, we split up and mutually separated. But we can induce ourselves toward the former connection of Arvut by way of the influence from the environment, the group.

A person cannot come out of a descent; he is bribed by selfish pleasures, buried under them. He does not have a place in his heart and in his mind to think about and feel the lack of spirituality. But without this suffering, we cannot come out of the descent.

Staying in Malchut (reason) and Bina (above reason) is a transition from our world to the upper one, Machsom, restriction, screen. Our entire work lies in discerning to what depth of desire I am able to descend in order to stay above it in bestowal, the level of faith above reason.

The Bina-Malchut relation is the relation of the creature and the Creator. All Kabbalah discusses is how to correct Malchut with Bina; whether a person/Malchut has a righteous one/Bina within—the desire to be in restriction, receive nothing, and only bestow (the property of Bina)
From Twitter, 8/7/18 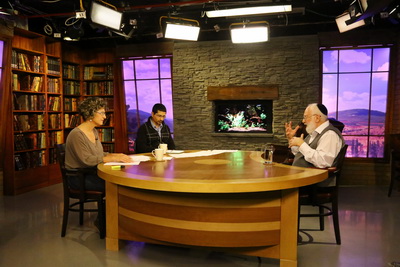 Freedom means rising above my nature, above the desire for my own pleasure from everything, from my limited world.

We no longer live in frameworks, as we did in the past, in which we were satisfied being “small-minded” slaves and trusting that there was someone above who cared. Today, everyone is free to do what they want, which is to be rid of pressures and responsibilities. A Kabbalist, however, works to free himself from his egoistic desire to exploit everything for his own benefit. He works to transcend his nature and see the world objectively.
[229195]
From KabTV’s “New Life 1024 – Freedom And Slavery,” Part 1, 6/26/18