Life is unification on 1, 2, 3, 4, 5 levels:
1. unity of particles via energy, 2. bioenergy exchange, 3. information exchange in living organisms, 4. exchange of feelings, 5. on the spiritual degree, exchange of qualities of bestowal above qualities of reception.
#Reality_ML #Kabbalah
From Twitter, 8/14/18

Breaking Israel News:“Lessons From Hiroshima: From Weapons Of Mass Destruction To A Weapon Of Mass Connection“

The largest portal Breaking Israel News published my new article “Lessons from Hiroshima: From Weapons of Mass Destruction to a Weapon of Mass Connection“: 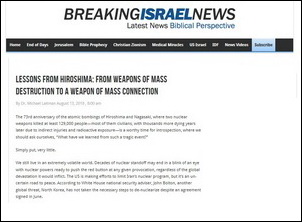 The 73rd anniversary of the atomic bombings of Hiroshima and Nagasaki, where two nuclear weapons killed at least 129,000 people—most of them civilians, with thousands more dying years later due to indirect injuries and radioactive exposure—is a worthy time for introspection, where we should ask ourselves, “What have we learned from such a tragic event?”

We still live in an extremely volatile world. Decades of nuclear standoff may end in a blink of an eye with nuclear powers ready to push the red button at any given provocation, regardless of the global devastation it would inflict. The US is making efforts to limit Iran’s nuclear program, but it’s an uncertain road to peace. According to White House national security adviser, John Bolton, another global threat, North Korea, has not taken the necessary steps to de-nuclearize despite an agreement signed in June.

Back in the 1950s, the great Kabbalist of the twentieth century Rabbi Yehuda Ashlag (Baal HaSulam) wrote about the consequences of nuclear proliferation in his essay “The Writings of the Last Generation”: “If the total ruin that they are destined to bring upon the world is still not evident to the world, they can wait for a third world war, or a fourth one. The bombs will do their thing and the relics that remain after the ruin will have no other choice but to take upon themselves this work, where both individuals and nations will not work for themselves more than is necessary for their sustenance, while everything else they do will be for the good of others.”

The teachings of Baal HaSulam are more relevant now than ever. Mutual hatred overflows within societies, between people and countries, at all levels. Humanity is acting in the opposite direction of nature, which is balanced and harmonious. Instead, we are moving away from each other, immersed in global confrontation and frictions, developing sophisticated weaponry to destroy each other.

The human being is the most harmful force in nature, even more so than a nuclear bomb. The path to destruction is paved by incitement and separation among people. The ever-increasing human ego, the evil inclination that resides in people, manifests itself in self-centered actions at the expense of others. The exponential effect of this division within humanity is what causes wars and global crises. If we fail to implement a change in our self-centered focus, then we will continue heading down a path of prolonged suffering.

There is, however, another path. It is one where we realize the corrupt way we relate to each other, and construct new, positive relations among society—a path of unity.

The more we tread the path of suffering, the more unbearable pressure would eventually make it evident that there must be another way to lessen the pain. Human society would then seek advice on how to survive and escape war and crisis. It will then be up to the generation’s leaders to do whatever possible to guide human society toward peaceful coexistence in an interconnected world.

The current global scenario is urging us to conduct this introspection, and choose a more civilized, enjoyable and wise path: the path of unity. Such a path is derived from nature’s key element—connection—where nature as a whole operates in total balance. We can replicate this harmonious system by replacing our egoistic relations with altruistic ones.

The transition between the two paths—from torturous torment to a fast path of human connection—is what the wisdom of Kabbalah teaches. As threats increase and crises continuously emerge, the wisdom of Kabbalah becomes revealed and accessible to all. It is the strongest weapon against any threat in the world, a powerful, positive, spiritual force that unites people by balancing good and evil. It is the “weapon of mass connection,” the only one we need for a peaceful existence.
[231689]

Why Are One’s Intentions Hidden?

Question: The intentions of others are hidden from a person. Why is that? If everything were revealed, life would be easier.

Answer: Then you would be an animal. It is arranged precisely so that people would be able to change themselves by gradually revealing their own intentions, correcting them, and reaching proper connections.

Remark: I am confident that few will agree that people have only egoistic intentions. There are good people and bad people.

My Comment: That is according to your criteria. We are born as absolute egoists. If we evaluate ourselves that way in regard to the spiritual world, we will discover that we are completely corrupted creatures.

Question: Why is it hidden from a person that his or her intentions are egoistic?

Question: If I feel the intentions of another person and thereby I realize my own egoistic intention, can that be considered an attainment?

Related Material:
A Concealed Intention
The Purity Of Intention
An Intention That Brings The Creator Closer

The Discovery Of Adam And The Failure Of Modern Sciences

Question: How did the Kabbalists discover that everything comes from the upper force?

Answer: The first person with heightened sensitivity appeared 5,778 years ago; he discovered that everything comes from the upper force, and explained it. His name was Adam.

He described what he discovered in the book The Secret Angel (Raziel HaMalach). It was a small booklet of 70-80 pages, but at that time, it was considered a respectable publication.

As all Kabbalistic works, initially this book was hidden from the public and was only revealed 3,500 years ago. Practically all forces of nature were described in it but in a very difficult, essentially encrypted form.

From that time and onward, the entire methodology became revealed and each person has the opportunity to delve into it, study, and learn it.

Question: Are scientists not talking about it yet?

Answer: Scientists are increasingly incapable of understanding the world we live in. Even though our world is constantly revealing itself more and more, it is nonetheless not the type of revelation that can be comprehended by the human instruments of study. Instead, it requires a much higher order of understanding.

A paradoxical picture appears: we only uncover small, fragmented pieces of the whole of creation and build our entire science on these fragments. However, in recent times, such phenomena are being revealed that we cannot explain.

Einstein, Hugh Everett, and other scientists offered some understanding, but nonetheless, the world in which we live is becoming evermore incomprehensible.

We have no answers to the majority of questions arising today because these questions demand a completely different approach, which we do not yet possess. We cannot exist above time, space, and infinite speed, and we cannot live in a matrix other than the one in which we exist.

That is why science, that is, the potential of our knowledge, is at a dead end, but not nature itself—it is revealed in the form of dark clouds, black holes, and so on. Yet who can explain all of this? The same also applies to the micro-world.

This speaks to the fact that our cognitive tools are very limited. Science gives us what it can, being the product of our capabilities, and nothing more.
[230589]
From the Kabbalah Lesson in Russian 4/8/18

Related Material:
The Finiteness Of Science
The Sciences And The Wisdom Of Kabbalah
Modern Science On The Verge Of The Unknown

Many families do not live in harmony and serenity because we have not been taught to communicate with each other correctly. The difficulties in the system of relationships stem from our being egoists; each one wants to control and is critical of the other.

The ego develops all the time, differences between us grow and multiply, and we don’t know how to communicate above it. We need to learn what human nature is and how to build a good mutual relationship despite the ego. It is not worthwhile to talk about what I do not love about my partner because I must achieve a situation where I love everything about him or her. Each partner must learn to see only good things in each other and to fully accept one another. We need to learn how to communicate above our differences and feel what the other thinks and desires, without words.
From KabTV’s “New Life 1032 – Harmony In Relationships Between Couples,” 7/10/18