The US and EU closed the free market; they found that if no one stops China’s procurement of Western developments, everything will end up in China. Now all sales decisions must be approved by the state. The free market closed as soon as it became unprofitable for the national elite!

Faith/Bina is the property of bestowal, unity. One must continue to rise from the achieved faith that became knowledge to a new rung of faith. As soon as the image of faith above reason is built, it fades and moves away, so we need to aim at faith above reason again, more accurately

Spirituality cannot be experienced in a selfish desire, Malchut, but only in Tzimzum Aleph, the screen, Ohr Hozer. The sole purpose of its desire to enjoy is to build a desire to bestow (Ohr Hozer, Faith, Bina) over it, which is where we attain the Creator, in Faith Above Reason.

Attainment of the Creator arises from Malchut merging with Bina: Malchut ascends to Bina, and Bina transmits its properties to Malchut. If I have risen to the next degree, the previous one turns into knowledge for me, where I discover the Creator. And then I must keep ascending.

Evolving in faith above reason, a person constantly senses the difference between what is desired, Faith, and the reality, Reason, while simultaneously existing in these two states. And this is not a war, but а convergence of Malchut and Bina, which is a way of life.

Rising above sensations, one thinks as if he is in the bestowal properties of the spiritual world and perceives the group in spiritual attainment, knowing that he is still in the ego, within reason and calculations. He lives on two floors, Faith and Reason, Bina and Malchut.

A person tries to imagine the next step, the stage of bestowal; it’s vital for him to begin experiencing this spiritual state as life. And at the same time, it’s built above reason, Malchut, as if he already is above the material world, in the properties of bestowal, faith, Bina.

On the path of faith above reason, we aren’t delusional; we know we’re only imagining the upper step and act it. We exist within reason in this world and at the same time we’re holding on to what seems like adhesion with the Creator. So, with efforts we attract the Light that reforms

The situation in #Israel will become dangerous. #Trump won’t improve it but will aggravate it, for his ideology is to break the financial and international trade systems. The whole world and half of America will resist Trump. It’s a dangerous conflict and we’re surrounded by hatred.

How is it possible to ratify a law on the national charter of a nation without discussing and defining what is the nation, people, land, what is their origin, development, and mission, and with enemies of the state being part of the government. Is this a provocation? #Israel

Allowing this speaks to our inner weakness, the lack of a spiritual basis to our nationhood, our country, and our land. We don’t know our purpose. Hence we are weak in the face of our enemies who proclaim that our existence is futile.

It’s paramount to rise to the degree of Lishma. The spiritual ladder is built on it. Acquiring the force of bestowal, faith, above the force of reception, which the Creator awakens. He advances us by awakening darkness, and we stay above it with the light of Hassadim—bestowal.

It’s vital to reach Lishma (on which the spiritual ladder is built) by gaining the force of bestowal/faith above the force of reception that the Creator evokes in us. So the Creator advances us, through darkness; yet we stay above it by holding on to the light of Hassadim (bestowal)

Advancing by faith above reason: the acquired knowledge becomes the step we build faith on. And faith acquired above reason becomes a new knowledge over which one must rise to a greater faith. So the new stage of bestowal, faith, turns into a new stage of reception, knowledge.

Ascent occurs due to the fact that we don’t ignore the desire to receive pleasure; it is filled with darkness and desperation—all that pertains to selfishness. But we act as if we are in bestowal, in Bina’s property, in unity: “They have eyes, but they do not see.”

We must work on two levels, so that one does not cancel the other. I know in my common sense that I live in selfishness and do not want to give anything to anyone. I am not attracted by the conditions offered by Kabbalah. This is how I feel in my ego and am fully aware of it.

I stand with my two feet on the ground, for the judge has only on what his eyes see. And at the same time, I think of the spiritual rung, as if the upper light has already come and filled me, granting me the power of bestowal, unity, adhesion with the group and in it with the Creator

Faith becomes a new stage that does not cancel the first. I exist simultaneously at two levels that do not cancel each other, but exist each in itself. Thus I build the stage of faith above reason: there is knowledge, Malchut, and faith, Bina, above it.

The way to live: if I manage to hold on to faith above reason, by putting in a full measure of effort, then I feel how the state I am in is changing. The previous stage of faith gradually turns into knowledge, and I need new faith, new bestowal, at a higher degree.

I climb the steps of the spiritual ladder: that which was faith turns into knowledge. Bina transmits its power to Malchut. Malchut grows. And I rise above it to a new stage of Bina: higher and higher!

It is difficult to remain at two levels at the same time, Malchut and Bina, so that one doesn’t cancel the other. Don’t keep yourself in one state like children do. An adult stands on his feet firmly in this world and keeps his head high up in the future world.

The ascent on the spiritual ladder to the end of correction occurs solely by faith above reason. The group’s support is vital. The fate lies in mastering the principle of rising from the rung of Reason to the rung of Faith—the basis of the spiritual ascent and acquisition of soul.

The Creator creates conditions where I act by faith above reason and remain in adhesion with Him in all of His and my actions. Thus I reach the stage of Bina, by exiting the desire to receive pleasure and clinging to the Creator’s property of bestowal, meaning, I planted myself in Him

“Nuclear weapons are deterrent weapons.” The truth is out, which boundary we can and cannot cross. With weapons, the Creator brought mankind to disillusionment so that mankind began to put itself to use. When you are facing an equally powerful opponent, you start #peace talks.

All states come from the Upper, who lives in me and controls me. Faith above reason is perceiving the Upper as good who does good. The Upper acts in the best way that leads to correction. Therefore, I must accept the heaviest feeling as the most advantageous.

Learning nature makes clear that all is built on connection, the Creator’s force of bestowal. Separation is the creation’s force made by the Creator to reveal His power of connection and love. Creatures have the opportunity to gain this power and connect to the Creator accordingly.
From Twitter, 8/15/18

Is It Possible To Enter Spirituality Too Soon?

Question: Is it possible to enter spirituality before the necessary correction and harm myself?

Answer: No. That is absolutely impossible! The spiritual world is protected by your own screen, so you will be unable to do it. It is like giving you a weight of 200 kilograms—you cannot lift it.

Spirituality is protected by a very simple thing: you yourself do not see, know or feel it, and when you get access to feel and work with it, it means that you already have a screen—an anti-egoistic force that helps you to direct your desire to bestowal and love.
[230743]
From the Kabbalah Lesson in Russian 3/18/18

Related Material:
Can the Creator Reveal Himself Prematurely?
Five Months Of Pregnancy Instead of Nine
Becoming Equal To The Creator 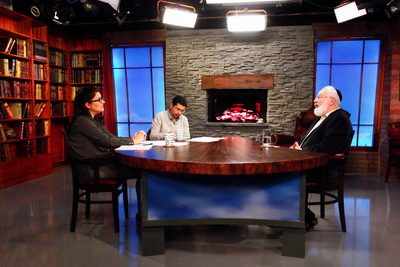 According to the wisdom of Kabbalah, the boundary that separates us from the upper world is the ego that lies within us, the desire to receive. Every person can and must break through this boundary at the end of all his incarnations and become equal to the Creator. Instead of living according to the standards of other people, we can explore who we want to become and achieve eternity and perfection in the upper world. All we need to do is ask the following question: “Am I doing this for my own benefit or for the benefit of others?” The upper world operates through love.
[230208]
From KabTV’s “New Life 1035 – Breaking Through The Egoistic Boundary,” 7/12/18