What is a miracle?

Hanukkah is a great time to talk about miracles.

A miracle, by definition, is something that according to the laws of nature isn’t supposed to happen. So for example, if at the end of the eight days of Hanukkah I’ve only gained two pounds or less, that can certainly qualify as a miracle …

See the full Hanukkah Card
Please feel free to print and share it with your community.

Learn everything about the spiritual meaning of Hanukkah 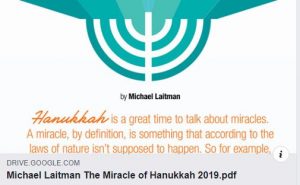 Seeing With The Reason Of The Upper Degree

Faith above reason is the topic we must constantly return to. Relative to it, we will undergo ascents and descents; all our work is concentrated around it. Faith above reason means that bestowal becomes higher than reception, that is, a person comes to the state when he or she lives with the force of bestowal. Of course, one rises and falls again, but a person already begins to conquer this territory, “the field that the Creator has blessed” where one is in understanding, awareness, and yearning to adhere to faith.

If I do not check what I have received, it is called faith below reason. After all, I do not have knowledge; I did not recount what I received, but simply took it for its word. It turns out that my faith is even lower than reason: There is no knowledge, just blind faith. In spirituality, this is not considered faith, it is only so in religion.

For faith above reason, I first must have my opinion and know what is happening according to it. I know that there is not a $1,000 in the envelope, but $999 or even just $1, but I accept it as $1,000. This difference determines my spiritual degree. I need these two clear points: reason and faith, Malchut and Bina.1

Faith above reason means that I accept $999 as $1,000 from the bottom of my heart. Clearly, it is not advisable to do so in a store. We are not talking about this world but only about the spiritual one. In the spiritual space, we must go by faith above reason because we are building our attitude toward the Creator above our reason, increasing so. Spirituality is not based on the force of knowledge, but on the force of faith.

I advance based on what Kabbalists say because I do not want to rely on the opinion of my egoism. The more I can annul myself before the upper one, the more I acquire the force of faith with which I can advance with the mind and heart of the upper one.

It is written about faith above reason, “They have eyes but they will not see; they have ears but they will not hear.” I have eyes, ears, heart, mind; I am a smart person and understand and feel everything on my degree, judging only by what my eyes see, and I stand firmly on the ground. However, the question is how can I rise to the degree above myself, by which lift? Where is this elevator, this means, with the help of which I will change my feelings and reason to the feelings and reason of the higher degree in order to rise from the state “I” to “I + 1”? To do this, I need to go by faith above reason.3

From above, an empty space is revealed to me all the time and I must fill it with faith. When I fill it with faith, I feel how for me it is getting filled with reason. Then again darkness is revealed, the empty space that needs to be filled with faith. With this force of faith, I rise to the next degree, which again will turn into reason. This is how we grow: conception-nursing-maturity (Ibur-Yenika-Mochin) each time rising and perceiving the darkness and emptiness that are revealed to us as part of the higher, following above us degree.4
From the 1st part of the Daily Kabbalah Lesson 12/5/19, “The Work in Faith Above Reason”

The commemoration of the miracle of Hanukkah, the Festival of Lights, comes this year at troubled times, when the darkness of anti-Semitism again targets Jewish people worldwide. Our very existence is a miracle after being persecuted throughout history and surviving, and now should be no different. We again will be able to overcome all difficulties the moment we unite. However, this unity will not be achieved through presidential decrees or sympathy from political leaders. Such measures only give us time to realize what we truly need to do to thrive and live safely.

“I am proud that Jews are part of my family” declared President Trump at a ceremony for Hanukkah at the White House days ago. On that occasion, he signed an executive order to combat anti-Semitism, recognizing Judaism as a national identity and not just a religion, thus making it possible to withhold federal funding from institutions that provide Jews with no protection against discrimination and racism. The measure brought some relief to a large section of the Jewish community in America, where the world of academia has become a bastion of hatred toward Jews and Israel. A sense of relaxation was also experienced by British Jews after the victory of Brian Johnson over the anti-Semitic Jeremy Corbyn. But this calmness is for a limited time only.

Despite the slaps on the shoulders and the outpouring of holiday gifts, the boiling anti-Semitism will not cease. The phenomenon will increase and the hatred for Jews will become stronger and more salient until we come to terms with the root cause of the problem: the lack of realization of what makes us Jews. Our core essence as a nation is to attain unity above divisions and to be a “light unto the nations,” the victory of light over darkness and unity over division. This is precisely what the festival of Hanukkah symbolizes, the victory of the Maccabees (symbolic of the forces of unity) over the Greeks (symbolic of the forces of divisiveness).

The Role of the Jewish People

Bringing a positive light to the world is what humanity identifies as our Jewish role. Therefore, until we unite and lead humanity to positive connection, the nations of the world will continue pressuring us, which is expressed as threats, condemnation and hatred.

How can we halt animosity against Jews? We can do so by utilizing the current period of political grace to become a positive conduit of unity toward the world. We must start moving in that direction. Trump and Johnson will not be eternally in power, and when new leaders replace them, the help we now have will be gone.

It is our responsibility to change and be changed. By simply shifting our awareness, we can correct the world and bring about the unity of the nations, to be “as one man with one heart.” All of us without exception are required as Kabbalist Rav Yehuda Ashlag writes, “It is certain and unequivocal, that the purpose of creation lies on the shoulders of the whole of the human race, black, white or yellow, without any essential difference” (The Arvut).

Our grace period has an expiration date and we have to hurry up and organize ourselves to bring about closeness among us. It is our task to deliver and make available the method of connection—the wisdom of Kabbalah to the people of Israel, and through them to all the nations of the world. The method of connection will bring about the proper balance of the world, the healing that will make things better.

If we shirk our duty, there is a danger that the current support from some world leaders could give us an exaggerated sense of confidence, and history might repeat itself and strike another blow. We shall not forget that in the past, the Nazi regime initially had pro-Zionist consultants close by who later flipped and became ferocious anti-Semites leading to the Final Solution, as documented here.

The illusion that we have unwavering supporters is similar to the deadened feelings of a person with a disease who has been given a painkiller. He feels fine even though the disease continues spreading. In the meantime, he lies in bed, talking and laughing with others around him, everyone thinking everything is okay, while he is merely desensitized to the disease festering under the surface toward an irreversible outbreak.

Today we have a breather period where we need to digest the process unfolding in front of our eyes, our role in the process, and act accordingly. We must not simply think that everything is business-as-usual, because nothing will heal that way.

The illness of division is rampant in the body of the people of Israel, and the healing is in exactly the opposite direction, in our unity. The cure is found in the love of the other, in building positive relationships based on the great rule, “Love your friend as yourself.”

The more we internalize and uncover the secret of the wisdom of Kabbalah, the more we will find that we only need to take a small step to bring us closer to a unity above our differences and the relative equality that will safeguard the uniqueness of each individual, while at the same time joining all parts into one.

Therefore, we must not become tired, despair, or give up. Our focus must be on internalizing and passing on the fact that a good life depends on the positive ties between us. Unity is the only remedy to mend ourselves and heal the world.

Cascading of the Upper Forces to Our World

Question: What does sequence of roots that hang down by way of cause and consequence mean?

We want to reveal creation from the uppermost root, which is the Creator. He is the cause of everything and everything else is His consequence, that is, the gradual cascading of all the laws, qualities to our world, down to each of us. This is the work of the Creator, nature.

The Creator or nature is one and the same, only “nature” is the broader sense of the word, which includes everything.

Question: What does the term “cascading down” mean?

Answer: The Creator is a quality of bestowal, love, and emanation. This is an absolutely good, absolutely complete quality from which emanate all the forces, all the qualities of our world, so that we all are under Him. Therefore, the forces represent the cascading from Him (the Creator) to us.
[252459]
From Kab TV’s “Fundamentals of Kabbalah,” 8/18/19

Related Material:
Path To Achieving The Upper Purpose, Part 1
Cause-And-Effect Chain Of Ascent
The Gradual Implantation Of The Creator Into The Creature

Question: Are the four states of matter, liquid, solid, gas, and plasma, branches of HaVaYaH?

Answer: Naturally. However, understanding HaVaYaH, i.e., the four-letter name, the pattern of nature, which is in every part of nature and in the whole, is a problem for everyone who is not only in our world, but also in the spiritual, because HaVaYaH is the skeleton of the whole universe.

Nothing else exists in nature, only the property of bestowal (absolute altruism) and the property of receiving (absolute egoism), plus and minus, in all its variations. Between them there are four stages that connect these two opposing forces.
[255932]
From KabTV’s “Fundamentals of Kabbalah,” 10/27/19

Related Material:
HaVaYaH—The System Of All Parts Of The Universe
The Unification Of HaVaYaH – Elokim
The Program Of Development Coded “HaVaYaH”