“What Can Be Done About Violence Against Women?”

On average, nearly 20 people per minute are physically abused by an intimate partner in the United States. During one year, this equates to more than 10 million women and men. (from the National Coalition Against Domestic Violence)

We need to deal with men in society. But no one is taking care of this. They only see examples of what others are doing and that dissipates the boundaries of what’s allowed and what’s not. The media is not portraying this in a way that benefits society. People need to at least learn something from these occurrences. Ideally that there is a very high social price to pay for this negative behavior. 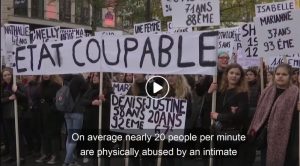 What Does It Mean To Be Sorry For The Public?

Baal HaSulam, “Anyone Who Is Sorry for the Public”: Therefore, a servant of the Creator who is not sorry for the public but feels only his own personal lack, his receptacle for abundance, is also not greater. As a result, he will not be able to receive the collective revelation of Godliness in the form of the comfort of the public, since he did not prepare a Kli to receive this collective discernment, but only his individual discernment.

Conversely, one who is sorry for the public and feels the troubles of the public as his own trouble is rewarded with seeing the complete revelation of the Shechina, meaning the comfort of the whole of Israel. Because his lack is a collective lack, the abundance of Kedusha [holiness] is also collective.

How can a Kabbalist feel the sorrow of the public? After all, the public has ordinary corporeal desires such as food, sex, money, honor, and knowledge. Should he regret that somebody lacks money or honor? No. A Kabbalist is sorry that the public is immersed in such desires, feeling sorry about it to such an extent that he is rewarded with seeing the correction of the public. A Kabbalist prays for the public and receives the light from above in order to convey it to people, correct them, and fulfill them. This correction makes a person capable of becoming a channel for the light.1

Restricting Egoism for the Sake of Connection

We do not delve into the study of our differences but simply try to connect and want to see ourselves as one man. I perform a restriction for the sake of connection, restricting my egoism in order to make room for the connection with a friend.

Restriction cannot be egoistic. If I am restricting for myself, it only seems to me that I am restricting my egoism. True restriction always happens only for the sake of accepting the other: the end result should always be in the initial thought. I want to connect with the friend and give him room in my heart, and thus, I perform a restriction. A spiritual action begins with the final result, with the intention, and only then it is carried out.2
From the 1st part of the Daily Kabbalah Lesson 10/30/19, “The Benefit of Moving into a World Ten – Contraction and Expansion” (Preparation for the Convention in Bulgaria)

Related Material:
All Who Feel The Sorrows Of The Public Merit Consolation
Sharing The Public’s Grief Is The Key To The Revelation Of The Creator
Society’s Suffering Through The Eyes Of A Righteous

Why Is Jewish Unity Fateful For Humanity? – Talk With Shaul Magid

Shaul Magid, the Distinguished Fellow in Jewish Studies at Dartmouth College, meets Kabbalist Dr. Michael Laitman to discuss anti-Semitism, and how establishing unity between Jews can prevent it.

We live in a shattered reality. Each smallest smart part of society, called human, lives only for a personal benefit, and has no opportunity to really understand or change anything.

The subconscious claim from the nations of the world on the Jews is that their misfortunes and suffering in life is caused by Jews. Kabbalah explains this sensation as a natural phenomenon.

From the time of the Jewish people’s birth under Abraham’s guidance 3,800 years ago, the Jews bear the method of building positive connections above the human ego. This method made them one entity and gave them a name – “Jews” (from “Yihud” – “united”).

Today, we face a global crisis, and since the world becomes more and more interconnected, this crisis will touch each area of human existence. The only way to avoid it is to correct human relations. From this point on, there is a need in Abraham’s method of connection, and the nations of the world already subconsciously demanding from Jews to implement it and share with everyone.

Therefore, the Jewish people must reunite. This is a need. If they do, the entire world will follow their example, if not – the new wave of anti-Semitism will overtake them.

Where Did Male and Female Parts Come From?

Question: All of creation is a desire to enjoy. The desire to enjoy for my own sake is called female part and for the sake of the Creator the male part. What does this mean?

This is similar to how our universe was created from the smallest particle of energy but energy of the highest class, the highest level. There was enough of it to create everything there is in our space, which we still do not know about yet. It is billions of times bigger than what we might imagine today, with everything that fills it.

It was all born from a small particle of energy that broke through the upper degree to our degree.

This particle included everything in itself: all kinds of positive and negative qualities that later expanded, developed, and become opposite to each other. Yet, all of them came from one point in which these qualities were in a potential state with no difference between them.

Therefore, if we are talking about a man and a woman, then their prototype is such a point, such an image called Adam in whom there were practically neither male nor female parts. They existed in potential and gradually developed from this object.

In our world, this was manifested as a gradual development of the matter of creation: inanimate, vegetative, and animate nature and man.

As it is described in Kabbalah, this occurred through intermediary stages from inanimate to vegetative, from vegetative to animate, and from animate to human, who developed from an ape.
[255116]
From KabTV’s “Fundamentals of Kabbalah,” 12/31/18

Feel Everyone Close to Yourself

Question: Can we say that the family is needed only so that we learn to give correctly? This is selfish giving, but at least I get some models of correct behavior.

Answer: Yes, there is something like that. At least, the family demonstrates the condition that if a person feels them as close, then I am ready to treat him as myself.

So, the whole problem is to feel everyone close. This is the method of Kabbalah. The upper light creates such an ability in us.

My Comment: The whole world—all I can see are my desires. I see myself inside myself.

Question: But I see part outside myself and part inside?

Answer: Yes. Only those desires that are outside of me are like strangers, but they are the most important for me.

Question: Where is the family in this?

Answer: The family is in the middle, on the border between the “I” and the outside world. It is a transitional link from the awareness of the external world as yourself.
[254129]
From KabTV’s “Fundamentals of Kabbalah,” 1/1/19

Filed under: Man and Woman, Marriage - No Comments →

Lesson on the Topic “The Work in Faith Above Reason,” Part 1

Writings of Baal HaSulam, “Preface to the Wisdom of Kabbalah,” Item 110

Lesson on the Topic “The Work in Faith Above Reason,” Part 2