What Can Be Done About Seasonal Depression?

Winter depression sets in right around the time that the holiday blues begin as well. It’s time for us to understand what is going on with our souls. This is the key to fixing all the problems in our life. 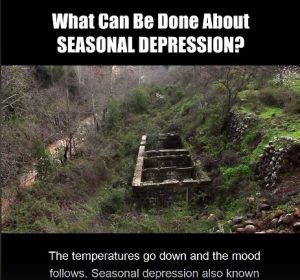 Filed under: Depression, Health - No Comments →

“Why Does Germany’s Angela Merkel Visit Auschwitz For The First Time Amid Rising Anti-Semitism?” (Quora)

Michael Laitman, On Quora: “Why does Germany’s Angela Merkel visit Auschwitz for the first time amid rising anti-Semitism? “

It is a political move on her part. Politicians make such moves not according to emotion, but according to what’s more worthwhile for them and their party. So I am sure that Angela Merkel and other people involved accordingly made a calculated decision.

The phenomenon of anti-Semitism, however, is much broader than politics. Until widespread knowledge about anti-Semitism’s true cause will spread, it will remain an unsolved problem. It will thus only continue worsening as we head into the future.

Anti-Semitism is a natural phenomenon. It surfaces in every person and nation, both Jews and non-Jews. Combating anti-Semitism is thus possible only if we gain awareness of where it comes from and what is its cause. Currently, we Jews raise the issue of anti-Semitism in a way where we as if seek to ask other nations not to hate us, and we see that it never works out.

Also, today we can identify hatred among Jews themselves who lack knowledge of the cause of anti-Semitism. If we do not learn the law of nature, how nature operates through all these phenomena, we will then always be mistaken.

The law of nature specifies that humanity’s final state is one of total unification, defined by the tenet, “love your neighbor as yourself.” The Jewish people became knows as such from having once attained a similar unified state around 3,800 years ago, under Abraham’s guidance in ancient Babylon (the Hebrew word for “Jew” [Yehudi] comes from the word for “united” [yihudi] [Yaarot Devash, Part 2, Drush no. 2]).

Therefore, Jews hold this message, to unite according to “love your neighbor as yourself,” within themselves. It is, as if, embedded in their “DNA” as a definitive component. The point within the person that connects with humanity’s more unified state is known in the wisdom of Kabbalah as the “point in the heart.”

Anti-Semitism emerges due to the following distortion: Jews have a latent point within that lets them access a reality of love, bestowal and connection. The Jews, however, do not want to realize the potential of this point, because they have been born, raised and identify completely with their egoistic nature.

Moreover, how could it be that Jews are anti-Semites? It comes from the attitude toward this point in the heart within. If they hate this point, i.e., want to live a comfortable egoistic life, and have nothing to do with trying to develop love, bestowal and connection to others, then such Jews become the biggest anti-Semites. In other words, anti-Semitism is always in relation to this tendency to love, bestow and connect that the Jews once attained: if they start trying to realize it, anti-Semitism will lessen, and if they reject it, knowingly or unknowingly, anti-Semitism will continue rising.

Therefore, the knowledge about the true cause of anti-Semitism is half of the problem’s solution. The next stage is to understand how we need not try to eliminate hatred toward Jews, but to discover a loving, bestowing and connecting tendency equal to or greater than the hatred upon it, according to the words, “love will cover all transgressions.” When we understand how to work in such a way, we will see how anti-Semitic hatred was given to humanity in order to elevate it to the peak of its existence. Until we do so, the hatred will continue being aimed solely at Jews more and more, and we’ll be blamed for everything.

We Jews are to blame for the hatred that anti-Semites feel toward us. However, it’s not due to the direct reasons that they point out, whether it be directed at the State of Israel allegedly oppressing Palestinians, or that we Jews have assumed too much power in countries we have assimilated into, among many others. It is instead due to us lagging behind our own revelation of love, bestowal and connection among each other, and our subsequent failure to pass on a connection with the source that brings abundance into our lives, which is capable of bringing peace, harmony and perfection to everyone.

Therefore, until we will initiate a major change toward uniting (“love your neighbor as yourself”), anti-Semitism will only grow.

Also, the €60 million that Germany donated to the Auschwitz-Birkenau Foundation in advance of Merkel’s Auschwitz trip would be better put to use if Germany opened a research center for the phenomenon of anti-Semitism.

Through investigating anti-Semitism, there is hope that we would discover its true cause and understand what needs to be fixed in order to reach a solution.

What can truly help combat anti-Semitism is the spreading of the true cause of anti-Semitism, understanding it as a law of nature.

Jews are unaware of the fact that they are to blame for anti-Semitism, because they have a role in nature to reach “love your neighbor as yourself,” and pass the knowledge of that law to everyone. Due to what our ancestors discovered in ancient Babylon under Abraham’s guidance, we once again have a demand from nature upon us, to unite above divisions and bring the world to balance. This will, in turn, create a counterbalance against the negative force of anti-Semitism, which will bring the world to a perfect state.

Rising To The Root Of The Soul

Question: What path does Kabbalah offer for managing one’s fate?

Answer: First of all, it is necessary to rise to the root of your soul, at least to the minimum degree, from which it is already possible to understand what is happening with you to some degree. In order to participate in the management, you need to climb at least three steps: Ibur (conception), Yenika (suckling) and Mochin (adulthood).

After climbing only one step, a student gets at least some idea of how the control signals descend to him and operate him. He starts to understand from where he receives knowledge, desires, and different opinions, where the decisions are being implemented, and he already receives their results.

Otherwise, it seems to him that everything happens in him. Due to the lack of understanding of where all the signals are born, he thinks that it is inside of him.
[255263]
From Kab TV’s “Fundamentals of Kabbalah,” 10/27/19

Related Material:
Managing Your Fate
Roots And Branches—Causes And Consequences
A Branch Is An Opportunity To Comprehend The Higher Root

Filed under: Free Will, Spiritual Teacher, Spiritual Work - No Comments →

Question: You often went with your teacher to the Kinneret (Sea of Galilee). Does this somehow have to do with Bina?

Answer: He and I traveled almost all over the country, and at each place we indeed felt different influences.

We had a small house at the Kinneret where we came and lived for several days. We did that periodically, once in a fortnight.

Question: Can a Kabbalist feel any forces that influence this Earth? Can he somehow draw these forces?

Answer: Of course, we drew strength from there, a lot of strength.

Question: Can you do this in Siberia or in New York?

Answer: No. Firstly, nowhere except Israel. Secondly, in the north near Tiberius, at Mount Meron there are vast spiritual spaces where you just fall into certain spiritual forces.

However, only people who are predisposed to this, who have developed such sensitivity within them and can tune in to the same frequency, can feel them.

This is not mysticism or meditation. We are talking about those who study Kabbalah. They feel and understand the difference in these forces.

Conversely, to those places that ordinary people consider spiritual, Kabbalists are quite prosaic, do not pay attention to them and do not refer any spiritual forces, influences, sources to them.
[255587]
From KabTV’s “Fundamentals of Kabbalah,” 1/28/19

Remark: When we are talking about a married couple, the concept of love arises. However, from the Kabbalistic point of view, love is something completely different.

My Comment: In corporeal relationships, love is based on instincts, on hormones. However, in Kabbalah mutual concessions, mutual attraction to each other, mutual help, and mutual care are called love. In principle, love is a state when you feel the desires of the other and fulfill them.

Question: Does it mean that I am a tool for fulfilling the other?

Answer: Yes. In this case, we can say that you love him or her.

Remark: You once said that the unit for measuring love is the unit of sacrifice.

My Comment: Yes. It is the extent to which you sacrifice yourself, that is, your diligence, your efforts in order to fulfill the other.

Question: If love is built on mutual concessions, then who should concede? Both of us? If I concede, the other will take advantage of me and vice versa. How to choose a measure here?

Answer: In this case, a joint contract is drawn between two extremely opposite parties that enter into a covenant with each other and undertake to help each other in revealing the Creator between them. This must be taught, learned, and nurtured.
[255155]
From KabTV’s “Fundamentals of Kabbalah,” 12/31/18

Lesson on the Topic “The Role of the People of Israel”