May we all unite and share our unity with the entire world.

Please share this message with your friends and family.

Learn everything about the spiritual meaning of Hanukkah 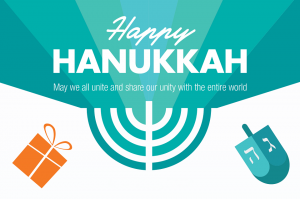 “I Am Terminally Ill And Afraid Of Death. How Do I Accept Death?” (Quora)

Michael Laitman, On Quora: “I am terminally ill and afraid of death. How do I accept death?
“

The best thing I could possible say to you if you’re terminally ill is that next time it will be better.

It’s a healthy approach to death, to look forward to something good and positive. If you truly have no way of healing from your illness and are certain of your death in the near future, then in my opinion, I’m certain that next time it will be better, and I wish for that thought to accompany you so that you could depart your life with comfort, calm, peace and hope.

The eternal discussion of who is a Jew recently became revamped when the attacker of the recent deadly shooting at a Jewish supermarket in Jersey City was found to be connected to the Black Hebrew Israelites.

If we examine Israel’s original sources, we find that Jews are a nation unlike other nations. That is, the Jewish people share no biological roots, but rather emerged from unifying based on a spiritual idea: the need to love and unite above all differences. The first instance of this unification was around 3,800 years ago in ancient Babylon where Abraham the Patriarch guided diverse groups of people to achieve such unity.

It means that if Jews unite based on this spiritual idea, and organize themselves under the supreme value “love your neighbor as yourself,” then they can be considered as a nation. Likewise, there is no basis for them to be called a nation if they make no effort to connect above the inborn selfish human nature.

When the group gathered by Abraham aspired to unite, they discovered that they hated each other, and upon the hatred, without eliminating it, learned how to love. In other words, unification was only achieved through the principle, “love will cover all transgressions.”

Why Does Hatred Appear When We Try to Come Closer to Each Other?

As in any natural system, interaction of opposites vitalizes and sustains the system. For instance, we cannot have day without night, left without right, and positive without negative. Unity is achieved through balance between the opposite forces. Therefore, when we take steps toward unification, we need not erase the hatred that surfaces, but instead, rise above it.

Mutual complementarity is key to the process of uniting. It is less like a young couple who quarrel out of unfamiliarity and relax, and more like a mature couple who have lived together for many years, who recognize each other’s weaknesses and know how to complement their differences of opinion. Therefore, similar to the balance between spouses, there should be balance between various factions of the nation, and between all nations of the world, as is written in Likutey Halachot (Assorted Rules): “The essence of life and existence, and correction of all of creation is in people of different opinions integrating together in love, unity and peace.”

Why Is There Growing Pressure on the Jewish People Today?

Today, there is growing pressure upon us to realize our role: to unite and spread love and peace to humanity, i.e., to be a “light unto the nations.” If we fail to repair our connections and reach the balance in question, we prevent the positive unifying force from flowing to the rest of the world. And when we block the positive force from reaching other people, negativity flares up specifically toward us in the form of anti-Semitism. Such hatred can lead to outbursts of violence, as we saw in the horrific murders in Jersey City, and in many other Jewish-targeted shootings, stabbings, crimes and threats.

As for defining who is a Jew, the Hebrew word for “Jew” (Yechudi) derives from the word for “unity” (yichud). By uniting, Jews attract the positive unifying force dwelling in nature, the force that is necessary for rising above hatred and achieving balanced relations.

Therefore, the remedy that can protect us from trouble is the power of unity. It is as Rabbi Kalman Kalonymus wrote in Maor vaShemesh (Light and Sun), that “when there are love, unity and friendship between each other in Israel, no calamity can come upon them.”

By rekindling the unification we cultivated centuries ago, and sharing Abraham’s method of connection with everyone, we can guarantee a happy and peaceful life for everyone in the world. It is my hope that we can realize this method sooner rather than later, as by learning how to positively connect above hatred, we will spare much suffering to ourselves and to the entirety of humanity.

Question: For a long time there was a ban on disclosure of the wisdom of Kabbalah in the world. Baal HaSulam wrote that the first ban is unnecessary, the second, impossible, and the third is the secret of the Creator.

What does it mean that it was unnecessary?

Answer: Was there a need, for example, for creating a nuclear bomb? Yet, as you can see, it was revealed to the world. Although on one hand, Einstein did not want to, he nonetheless gave the formula because it became clear that scientists of Hitler’s Germany were successfully working on this issue. Then the formula was stolen, and from this started the development of the nuclear industry in the West and East.

Question: Does this mean that Kabbalah will bring no obvious benefit?

Answer: Kabbalah will bring no obvious benefit if it is placed in a person’s hands, like a nuclear bomb to a Neanderthal.

If a person is not yet ready for this, if one does not have a clear yearning for understanding the meaning of life, that is, one is not yet completely disappointed in this existence, then the disclosure of Kabbalah will begin pushing the person to mysticism, to the opportunity to earn money from it, etc. That is, Kabbalah should not be revealed to one who wants to receive some kind of privileges, some benefit in this world.

If a person already understands that he does not need this world at all, he is not attracted by wealth, knowledge, power, or honor, nothing at all, he only wants the upper world, only the connection with the Creator, then Kabbalah should be disclosed to him.

Therefore, it is necessary to be very careful. However, in our time this ban has already been lifted because people, in principle, are so disappointed in this world and are in a general depression that even if they wanted to use Kabbalah in some way, in the form of magic and other things, no one would take it seriously.

Question: Is there a certain stage in the development of humanity when the revelation of the Creator can harm a person?

Answer: Yes. When a person still has a desire for this world and at the same time becomes acquainted with the method of attaining the Creator, then he or she begins to think, “How can I attain the Creator in order to profit in this world?” This is wrong and will never bring any benefit. It is because the revelation of the Creator can be only in order to rise from this world to the upper world through our attainment. The body will remain, but the spirit of attainment will begin to break through to the next world.
[254917]
From KabTV’s “Fundamentals of Kabbalah,” 1/8/19

Related Material:
Concealed Because It Is Not Needed
The Right Dosage!
There Is Nothing To Fear In Studying The Wisdom Of Kabbalah