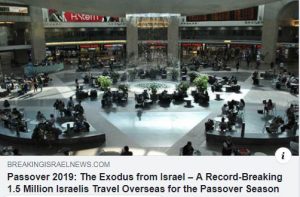 “Why is this night different from all other nights?” Passover Haggadah.

You won’t see this in any other nation. Paradoxically, during the Passover holiday, which celebrates the exodus of Jews from Egypt and entrance into the land of Israel, there are a record-breaking 1.5 million Israelis doing just the opposite—exiting Israel and flying abroad—a number 11% higher than one year earlier in 2018.

Why are so many Israelis choosing to leave their country for the holiday season?

Many say that Israelis themselves have made it cheaper to holiday abroad than to stay in Israel. But why would we do that? Why would we let such a situation materialize where we make it more expensive to go on vacation in Israel than to scatter elsewhere for the holidays?

Don’t get me wrong, it’s perfectly fine to take a vacation. But when nearly a fifth of a country’s population leaves during a holiday that marks the entrance of its people into its land, it’s bound to raise eyebrows.

Cheaper overseas holiday costs aside, what can be clearly stated about today’s Israel is that it is very different to the nation that once exited Egypt to enter the land of Israel. It is not a nation bonded by a common will to unite above its divisions in order to realize its spiritual potential. On the contrary, today’s Israel looks more like a loose collection of individuals each out for earthly satisfaction.

This also explains Israel’s significant “brain drain” problem, where hordes of Israeli scientists, academics and intellectuals choose to leave Israel and live abroad: When material gain is the guiding star of our lives, then offer us more money, honor or power somewhere else and we’re on the next plane out of here. Without any inclination to unite, and with our sights set no higher than on individual gratification, there is nothing ultimately tying us to our homeland.

What is the big deal then? Is there any reason why Jews should stay in Israel?

Call it destiny. Here in the land of Israel, we are meant to reveal what our ancestors once revealed: the light of unity. We are fated for our role, which is to unite (“love your neighbor as yourself”) and to spread that unity to the world (to be “a light unto nations”). Fulfilling our ultimate spiritual potential is the single reason for us to remain in the land of Israel. Embedded in our genetic makeup, stemming from our ancestral heritage, is a tiny desire for uniting above all the surface materialistic desires. This is the point we must awaken in each other while we are here.

Moreover, when we discover the immense joy and happiness available in the attainment of the light of unity, our need to look for greener pastures will disappear. Kabbalists describe the intensity of such spiritual pleasure to be like the size of the universe compared to the size of a grain of sand found in material pleasures. After feeling such perfection in unification, the desire for other fulfillments will wane and we will also feel less of a need to travel in pursuit of pleasure.

After the 1.5 million Israelis return from their overseas holidays this Passover season, I’d recommend that they each ask themselves “What did we gain from this holiday?” And to the expected answer, “We had a great time!” probe deeper with the question from the Passover Haggadah itself, “Why is this night different from all other nights?” In other words, did anything really change in our lives? Also, what’s next? Are we just going to continue to bounce from one pleasure from the next, one fun holiday after another until we die? Or, can we start advancing toward a much more qualitative pleasure, one that doesn’t fade but which constantly grows—the eternal, spiritual pleasure discovered by the people of Israel when we entered the land of Israel long ago?

We have everything we need right here at home. We have each other. We just need to learn how to correctly connect, and we’ll discover the ability to travel far beyond anywhere in our entire world—to an eternal world of harmony and perfection.
[245601]

Turn Egypt Into The Garden Of Eden
Podcast Powered by podPress (v8.8)