A Criminal Who Becomes A Professor

In the News (San Francisco Examiner): “San Francisco thinks it may have an answer for its rising gun violence problem: Paying people to not pull the trigger.

“The idea is to provide the small number of San Franciscans who authorities believe are most at risk of shooting someone — or being shot — with an incentive to get help and stay out of trouble. It’s a solution that proponents say already has shown promise preventing gun crimes in other parts of California. …

“Participants will be able to earn up to $200 more a month by hitting milestones in the program, such as landing a job interview, complying with probation or consistently meeting with a mentor.”

Answer: Psychologically it can work. After all, $200 means that a few times a week he can go to a bar to drink beer. To celebrate his exemplary behavior.

Question: Why, in principle, are such terms given to petty criminals?

Answer: To provide a non-committal reply. It is clear that this does not correct anything.

Question: That is, you would not convict a person, would not put him in jail?

Comment: Yes, but according to the Torah, a serious criminal is still isolated.

Question: But if such criminals are not imprisoned, what can be done with them? How to educate them?

Answer: Very simply. Establish schools and universities and instead of sitting in their cells, they will sit in classrooms and study. Teach them everything that they have not learned. They should write, make reports.

After the bell rings they all have a meal. Then they come back and have another lesson. There they must repeat the material, raise their hands, and answer questions.

Question: Would you send police officers to stand near the classrooms?

Answer: Police officers should be teachers.

Comment: That is, if you put this petty criminal in school for two years…

My Response: You will receive professors.

Question: And this is the best system that can ever be?

Answer: The only one. Only education. Only serious studies. Moreover, according to their interests; someone perhaps will go for music. There are a lot of people interested. Music, art, construction, activities with animals, they will want something like this.

That is, we should reveal their talents. It will be much cheaper than maintaining all these establishments.

Comment: It seems that there are a lot of talents hidden in criminals. Even more than in the rest of the people.

My Response: This is basically why they become criminals. Because they cannot realize themselves in something normal. This is how our world was created. It is necessary to find this bud in a person, to reveal this talent in him, and he will flourish.

Question: It would be nice if it could be like this! But how to do it? Where will you find such judges, educators, and police officers?

Related Material:
“Is The International Criminal Court’s Decision To Investigate Israel’s Alleged War Crimes An Anti-Semitic Farce?” (Quora)
All The Criminals Of The World—In One Person
The Judicial System Needs To Be Destroyed

To Become Similar To The Creator

Question: Isn’t the revelation of the Creator creating something out of nothing since there was nothing like it before?

Answer: The revelation of the Creator in each of us is really like the creation of man itself. In my egoistic desire, I begin to transform myself to be equivalent to the Creator, to build the man inside me called Adam (from the word “Adomeh”—similar to the Creator).

In principle, everything is simple: I must understand who the Creator is and help others reach this state too. This is called building man out of an animal. In this way, I will also become like the Creator.

Question: Let’s say I see a neighbor in front of me. What can I give him?

Related Material:
The Soul Is the Part of One’s Desire That’s Similar to the Creator
Ascending Toward The Creator Along The Degrees Of Desire
What Is the Soul?

“How Can We Make The World A Better Place?” (Quora)

Michael Laitman, On Quora: “How can we make the world a better place?“

By implementing connection-enriching education—the wisdom of how to positively connect above divisions and differences—on a mass scale, through educational systems, the media and other social influences, we would draw an immense positive force into the world that would make it a better place. 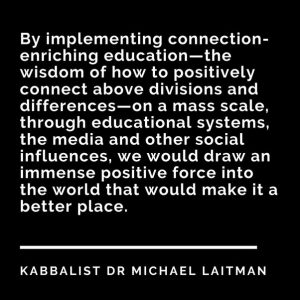 Do Not Stray From The Torah

Question: What does it mean “Do not deviate from the Torah either to the right or left.”

Answer: It means to abide by the Torah not in the right or the left line, but in the middle.

That is, you must take into account your egoistic foundations. They do not disappear, you must constantly correct them from the right line and follow the middle line.
[289687]
From KabTV’s “Secrets of the Eternal Book” 9/13/21

Related Material:
The Torah Is A Program And A Guide
Preparation For Receiving The Torah: The Light Of Correction
When We Open The Torah

Mastering The Quality Of Bestowal And Love

Question: I spoke to many psychologists and tried to understand what the problem with psychology is. They say that it is very difficult to find methods of managing egoism because it is constantly growing, especially nowadays.

How do Kabbalists deal with the fact that egoism is constantly growing? How can we counterbalance it?

Answer: Kabbalists say that there is no need to counterbalance egoism, there is no need to do anything with it at all. You just have to work all the time to master the quality of bestowal and love, rise above the ego, and not stay on its level. That is the approach of Kabbalah.

By rising above egoism toward the quality of bestowal, love, connection, interaction, and communication with each other, we begin to understand how diverse egoism is, how strong it is, and how difficult it is for us to deal with it.

But at the same time, we reveal qualities in us that are opposite to egoism. And then, based on the combination of egoistic and altruistic qualities, we can understand both psychology and the science of Kabbalah.
[289473]
From KabTV’s “Spiritual States” 10/15/21

Related Material:
How Egoism Be Neutralized?
Finding The Force That Balances The Ego
How To Cure Egoism?

Kabbalah And The Consumer Economy, Part 8

Toward an Economy of Mutual Guarantee

Question: Baal HaSulam in the articles “The Solution” and “The Last Generation” writes that the consumer economy, which is experiencing a crisis, will be replaced by an economy of mutual guarantee. I would like to understand what this economy is based on?

Answer: On the fact that it is one single system. We are connected to each other and completely dependent on each other.

Nowadays this mutual connection is revealed more and more vividly and fully. It indicates that we must be connected by good ties because we cannot break this connection. If we remain dependent on each other through egoistic connection, then we will lead ourselves to annihilation, to mutual destruction.

Therefore the wisdom of Kabbalah is now being revealed in the world in order to help us correct ourselves, to come to a good dependence on each other, instead of what we already see now that the whole world is becoming global, integral, and everyone only wants to destroy each other.

Therefore in order not to bring ourselves to a Third World War, we need to think now about the way we will organize a new society.
[254753]
From KabTV’s “Fundamentals of Kabbalah” 1/3/19

Looking Into The Depth Of Nature

Question: Many of the scientists you meet strongly support Kabbalah. Will they be able to help with disseminating the wisdom of Kabbalah, its acceptance, and growth?

Answer: Partially. The fact is that we do not need scientists to promote Kabbalah. We need people who want to discover the world in new sensory organs without the use of all kinds of devices.

Scientists, on the contrary, are conservative in this, they cannot work in any other way. They dedicate their whole lives to studying nature with the help of all kinds of accelerators, microscopes, telescopes, and so on.

Kabbalah says that we can and should study nature by changing ourselves: “Make a microscope, a telescope out of yourself. Start looking into the depth of nature by changing your qualities, and then you will be able to achieve this.”
[289570]
From KabTV’s “Conversation about Science”

Related Material:
That Loud Word “Nature”
The Creator Equals Nature
Love As The Law Of Nature

When We Don’t Use The Ego

Answer: The same egoistic attributes that are revealed in a person in our world each and every moment need to be restricted and should not be used.

If a person does that, he begins to feel that he is in a certain egoistic state, in the attribute of bestowal. Now he can already increase this attribute with regard to others, with regard to the Creator, and thus ascend to upper levels and feel the upper nature, His attributes of bestowal, love, and unity.

He begins to understand the origin of our world and why it is managed in this particular way. A person sees and understands all the causes and effects of what happens here. He reveals all that as he attains a certain level in the spiritual world.
[254493]
From KabTV’s “Fundamentals of Kabbalah” 10/6/19

Related Material:
Restriction And The Screen
From Total Restriction To Total Revelation
The Screen Is A Calculation For The Work With The Desire

Writings of Baal HaSulam, Shamati #65 “Concerning the Revealed and the Concealed”