Our work is meant to accelerate our development. Just as a computer program can run at a speed of 100MHz or 1000MHz, so man can return with varying frequency to the thought of the Goal, the Creator, where he is in his intention and aspiration, accelerated development!

Man cannot provide for his existence in isolation from society. He is created to live within society, like a cogwheel in a mechanism. He has no freedom of motion—he is intertwined in the common motion so the mechanism as a whole will fulfill its task.

Each person’s egoism is necessary for independent existence, the provision of one’s vital necessities.
Use of egoism beyond the necessary is for the benefit of others. It is thus transformed to altruism.
Use of egoism beneath what is reasonable for one’s existence is forbidden!

The degree of ego’s development determines the degree of its use and of man’s development: 1. open use, 2. restricted use, 3. hatred for one’s egoism, 4. awakening of love for others (altruism), the foundation for goodness, from love for those close to you to concern for all mankind.

Egoism doesn’t refer to natural self-love, required to sustain one’s animate existence, but rather to the character it takes on of hatred and exploitation of everyone for one’s own sake, which generates theft and murder.
By that, it is opposite to love for others and destroys society.
(Baal HaSulam, “The Nation”)

The quality of #Singularity is instilled in every creature by the Creator—their only root. But when it unites with egoism, the quality of singularity becomes destructive: with it, all creatures wish to use the whole world for their own benefit, not caring about others’ demise.

The further man advances, the more he cares about his environment (above egoism 0-1-2-3-4) until entering spirituality, when he ceases to feel his own existence at all and works in bestowal, without personal calculations. He thereby becomes free, autonomous, spiritual.

We thereby attain equivalence to the Creator. What we receive for our sustenance is not considered reception.

Each person’s desire separates him from the Creator—this is where we exist. The Creator’s plan is for us to become independent and similar to Him, that is, without changing the desires, to change the intentions from “for myself” to “for you.”

Likutey Etsot: “The world’s foundation is unity of two opposites. If you see a person who is of the opposite opinion, and think that it is impossible to accept him, do not be quick to assert so. On the contrary: the world’s perfection is to try and reconcile two opposites.”

#Zohar: By virtue of this book they will come out of exile by disseminating the wisdom of Kabbalah among the masses, they will merit full emancipation from egoism because its light (force) returns to the source (the Creator). Otherwise they cannot attain their predestination.

Baal HaSulam: “The Wisdom of Kabbalah and Its Essence”: “I am happy to live in a generation when it is possible to disseminate the wisdom of Kabbalah. Since before our time, Kabbalists were not permitted to study Kabbalah in the open, before everyone and with explanations. This permission has been granted because of the special state of the generation.”

Baal HaSulam:”The Wisdom of Kabbalah and Its Essence”: “Since the wisdom of Kabbalah speaks of the Creator’s revelation, no wisdom is more valuable. Kabbalists described it in a way that allows one to study it effectively and be corrected. Then they temporarily concealed it in order to reveal it in our time forever.”

Just like the sea enters in-between mountains and separates them, egoism has entered between us and separated us. We must erect bridges of love above the ego. We will then begin to attain and control all of nature: our egoistic nature and the Creator’s altruistic nature.
This is the aim of our #development.
#personalgrowth

Growing #egoism elicits hostility in society, of everyone toward everyone, dividing society into tinier and tinier hostile groups by color, religion, gender, etc. No one is able to unite. But it is those evoking these conflicts who will soon begin to mutually destroy themselves.
From Twitter, 2/24/19

“Anti-Semitism An Ominous Presence In US Politics” (Newsmax)

My article in Newsmax: “Anti-Semitism an Ominous Presence in US Politics” 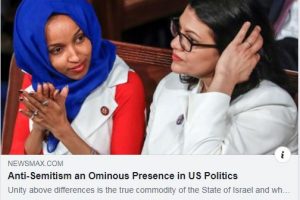 How many times do freshman lawmakers from the Democratic Party need to apologize for anti-Semitic remarks until we understand what truly lies in their hearts and minds toward Israel and the Jews?

Minnesota Rep. Ilhan Omar allegation that the Jewish lobby and money are buying American politicians seems to be only the tip of the iceberg of a larger anti-Semitic problem of a vociferous and growing radical wing against Israel within U.S. Congress and political circles.

Only after a strong condemnation and ear pulling from her own party, Rep. Omar stepped back from her comments, sort of. It was certainly not the first time she sparked controversy with inflammatory remarks. Back in 2012 she tweeted that Israel had “hypnotized the world,” among other accusations during her political career.

Meanwhile, Rep. Rashida Tlaib, D-Mich., a firm supporter of Israel’s boycott, has been busy taking pictures with a pro-Hezbollah activist and accusing American Jews of “dual loyalty.” Both lawmakers have been warned by Republicans that “actions” will be taken if their incitement against the Jewish nation continues.

Jew-hatred appears to reach consensus regardless which side of the coin the anti-Semites belong to. Holocaust denier and former Ku Klux Klan leader David Duke has weighed in on this controversy, aligning with Omar’s conspiratory views toward Jews.

He didn’t miss the opportunity to add more fuel to the anti-Semitic flame. Since Jews, Israel, are blamed for anything and everything in the world, this time Duke brought Trump’s wall to the public discourse, no less, demanding Israel pay for it.

One of the ways the nations of the world blame the Jews is by stating that Jews control the world and all evil comes from us. By saying so, they imply that changing the world for good depends on the Jewish people.

From Nature’s perspective, meaning the inner forces that operate our world, this is, in fact, what we are destined to provide humanity. This is also the underlying reason for the growing hatred and demands toward us if we fail to fulfill this mission.

There is no fine line between anti-Semitism and anti-Zionism.

Simply put, there is no line; they are the same. It is just easier and more comfortable for anti-Semites to hide their true colors under virulent criticism against Israel. When the Jewish nation is attacked from all sides, it is clear that we are the only ones we can rely on. Our good future depends solely on our unity.

Our nation was forged precisely through that unity, when individuals of different descents pledged to be “as one man with one heart.” Once our ancestors made that vow, they were tasked with passing unity on to the rest of the world, thereby becoming “a light unto nations.” When Jews disassociate from one another — and thereby abandon their commitment to humanity—they cease to be a light unto nations, and in so doing, invoke hatred toward them.

As it is written in “The Book of Zohar,” “Because they are of one heart and one mind … they will not fail in doing that which they purport to do, and there is no one who can stop them.” Our sages also stated, “Although the bodies of the whole of Israel are divided, their souls are a single unity at the root. . . . This is why Israel are commanded to unity of the hearts, as it is written, ‘And Israel encamped there,’ in singular form, which means that they were corresponding below, meaning they had unity” (Rabbi David Solomon Eibenschutz, in “Willows of the Brook”).

Unity above differences is the true commodity of the State of Israel and what Jews in general have to offer the world, because this is our foundation as a people. We possess the method for bringing people together. Once we reach this unity, it will reverberate around the world to neutralize anti-Semitism. As the Midrash Rabbah writes in “Song of Songs,” “Israel bring light to the world.”

Question: What are lyrics for a Kabbalist? Can Kabbalists feel sad?

Answer: Lyrics are feelings. In Kabbalah, feelings always have their specific mathematical expression.

I can write them in the form of a formula, send it to you via fax or by email, and if you understand it, you can already manage this formula, that is, you can reproduce it in yourself and feel what I feel. Then you and I will have the same feelings. In this way we transmit Kabbalistic information to each other.

In our world, we can transmit sensorial information to each other, but it will express different sensations in us. Suppose a certain symphony is being played; each perceives it differently because it imposes sounds that evoke feelings in each one, and therefore everyone interprets them in accordance with their inner experiences, with their past, etc.

This is not the case in Kabbalah. In reproducing Kabbalistic information, you penetrate it sensorially, you transmit your whole self over to this information, it plays in you. You become the material that it sculpts and forms; you experience this state.
[240029]
From the Kabbalah Lesson in Russian 11/11/2018

Related Material:
Passing On Attainment To One Another
Playing With Sensations
Passing On Secrets From One Kabbalist To Another

The nation of Israel is a natural social phenomenon. It is a small group of people from which operating commands spread around the world. The world is completely influenced by Israel’s relationships both internally and externally. Jewish people have a unique ability to rise above their differences and provide an example of positive relations between people to the whole world. When they fail to radiate connection, the world suffers, accuses them, and closes in on them. Anti-Semitism is a law of social nature. Currently, the lack of connection within Israel is causing the global crisis. The Palestinians want the Israelis to leave the area and the world wants them to completely disappear. Jews are not realizing our destiny or the reason we were given a state. The great anti-Semites wrote that if the Jews were to connect, all the world’s problems would be solved. A show of connection will reassure everyone. The world expects us to bring it to a perfect new experience of life in which each person feels full and complete. It is in our power to decide.
From KabTV’s “New Life #152 – The Israeli-Palestinian Conflict, Part 1,” 3/3/13

Writing of Baal HaSulam, Introduction to The Study of the Ten Sefirot, item 13