In every state imagine that you are in the Creator’s kind governance. He surrounds you from all sides, in thoughts and desires.
These efforts will result in total consent to annul all your egoism and see the egoism as help from the opposite, created by the Creator …
…. an image opposite to the Creator.

From the Creator’s concealment, as the advantage of light from darkness, one must reveal Him, “One, Unique and Unified,” none else besides Him, who controls the ego. All of the Creator’s actions are deliberately covered by 125 layers of man’s ego so that, through overcoming,
he would gradually reveal the Creator.

I have to reform myself. How? How should I change?
Only in that which you need to be fully united with the ten.
For the rest, stay as you are. The goal is to be united over the constant obstacles, until our unity is complete and we can unite with the Upper Force, our Source.

Try to feel the states of night and day as equal, coming from the Creator, as if you’ve merited perfection.
And if you feel a difference between them, ask for the Creator’s help so that you wouldn’t feel a difference in any states …
… but value each one according to how much contentment you can give to the Creator.

Man has but one task: to reveal the Creator as the only existing entity that controls everything, regardless of how man perceives Him. To reveal the One governing him by raising the Creator’s greatness within, against the ego that befuddles him …
… and screens the Creator’s perfection and singularity.

We must accept the Creator’s rule in our lowest state, and still proceed above our reason and feelings, without consideration for them, as though between heaven and earth with nothing to lean on, because we believe above reason that it is the Creator’s wish for us to accept His rule without any conditions.

For as long as man feels bad states, he perceives them as coming from people. But when he merits seeing only good in the world, and that everything turns to good, the truth is revealed to him—that everything happens only by the Creator’s will.
From Twitter, 2/9/19

Question: Is exiting yourself some kind of fleeting state or a level a Kabbalist feels himself in all the time?

Answer: Exiting yourself can sometimes be transitory, sometimes repeated in different ways. It then becomes permanent and progressive.

Question: Is everything that comes directly from the higher power felt as pleasure?

Answer: Yes, because the upper force is the property of bestowal and love of the Creator. If it is acquired and felt by us in the same way according to the law of equivalence of form, then to the degree that we enjoy, we feel the Creator and our adhesion with Him.

Question: How must I relate to questions and answers?

Question: Is my true “self” a black point in the heart that is connected with its source, with the Creator,  and my egoism is exists separately from me?

Answer: The egoism is not yours. It is given from above so we will transcend it and can begin feeling the new world. Our “I” is a fixed point. Around it you build your new attainment.

Question: How is a Kabbalist different from the Creator?

Answer: A Kabbalist differs from the Creator in that he builds the property of bestowal and love above egoism. This characteristic exists initially in the Creator. With us it is acquired and with Him it is natural.

Question: Is death a punishment or a reward?

Answer: There is no such thing as death. There is a transition from an egoistic desire to an altruistic desire through the study of Kabbalah. If a person doesn’t study Kabbalah, then his egoistic desire gradually fades until it becomes zero, this is what is called a person’s death.

Question: You constantly say that it is necessary to study, and you invite people to participate in lessons, is it possible to exchange study for some kind of work?

Answer: You can’t replace study with anything, because the upper light descends on us during the lessons.

Question: If all that is presented to me is an illusion, then aren’t all ascents and descents part of the same depiction and therefore an illusion?  Should we try to get out of this maze?

What Is The Benefit Of Correction?

Question: If all events are already pre-planned, then what is the use of me changing? Whatever is meant to happen will happen anyway.

Answer: No. The world is created not for us to let it run its natural course: “Whatever will be, will be.” We should not take it this way and relate to it like that.

Question: So there is a script, but it is not predetermined? Or is there some kind of freewill for the participants of this performance?

Answer: If I could rise a degree above myself, I would find that everything in me is determined from there: what I see, what I feel, how I decide to act, and what I achieve. Everything exists on this degree.

But I don’t know this. Therefore, I must act in accordance with this supposed higher degree, without seeing, without understanding, and without knowing it, to the extent of my faith in it and in the measure of my property of bestowal.

If I have an intention to give, to adhere to the Creator, to do what He deems necessary, then I rise up to this degree, carry out whatever He has written in it, and reveal that everything is prepared in this way; there is nothing new under the sun.

But I myself reached the decision that I need to correct myself in order to see a corrected world; I depicted it before me and it materialized.
[239080]
From the Kabbalah Lesson in Russian 8/26/18

Related Material:
A Crucial Question
The Opportunity To Choose Your Destiny, Part 3
What Does It Mean To Change The World? 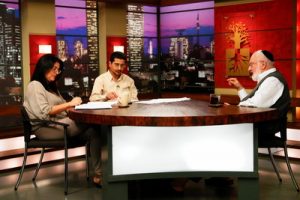 New Life 1077 – The Potion Of Death, The Elixir Of Life
Dr. Michael Laitman in conversation with Oren Levi and Nitzah Mazoz

A Kabbalist sees the upper world because he makes a special inner correction through the force of bestowal in nature. He rises above the ego each time he receives a dose of the upper Light. He constantly improves himself in this way and experiences the real, eternal world or the elixir of life. By becoming similar to the upper Light, he gains the power of bestowal and love. In Kabbalah, using drugs as a way to feel connected to others is unacceptable since it does not allow a person to overcome his egoistic nature. Each portion of Light that a person receives imparts a quality of bestowal and allows him to become a true pipeline of love toward others.
[238347]
From KabTV’s “New Life 1077 – The Potion Of Death, The Elixir Of Life,” 12/11/18