2019 is a year of internal conflicts.
Countries are moving away from their ties. Governments are forced to go deeper into their problems: people’s lives aren’t getting any easier, but they don’t want to listen to their arrogant rulers any longer.
Everywhere, the authorities are increasingly disconnected from the people. Egoism… #NewYear

By 2019 the world strove toward nationalism and disunity—a sign that egoistic development in us threatens stability.
Egoism (and altruism) grows in waves (falls and rises). Hence, #Trump will win now, but is bound to lose in the #future.
He will be replaced by a period of correction of egoism. #politics

#Nationalists and #liberals will disappear, having failed to solve problems—they have no plan to move ahead in development.
Elite is no longer global; it lost power. Its opponents are not the peoples, but growing egoism.
Any manifestation of egoism has no place in the #future.
It needs correction—by education! #politics #society

10 years after introducing the euro, its existence is ending.
This indicates the pace of today’s human development!
By introducing the euro, corporations gained profit, but the EU population’s consumer ability grew slower than before the introduction of the euro. The elites won.
From Twitter, 1/2/19

The election campaign in Israel is not going to look any different from other election campaigns the world has witnessed over the past two years. It’s a spree of excessive ego, exploitation, and corruption. Everyone wants to control and trample the other players and take the biggest possible piece of the pie.

From a bird’s eye view, politicians seem like a bunch of overgrown children, fighting over the steering wheel of the car in their playground.

However, specifically the power struggles in Israel make for the best mirror of what’s happening around the world, because the elections for the leadership of the people of Israel began 3,800 years ago at the cradle of civilization.

Back then in ancient Babylon, a variety of tribes and clans lived side by side until their egoism had erupted and threw their society out of balance. The various Babylonians began to separate from each other, and wanted to expand at each other’s expense.

Within the jungle of narrow interests at play, there was a thought leader who came up with a more global point of view. Abraham the patriarch was perceptive to the harmony and interdependence that existed throughout nature. He traveled across the various tribes with a new kind of campaign: Nature itself is creating the rifts between us, he told the Babylonians. Rather than trying to overpower and cancel each other’s views, let us work maturely above our egos and awaken a greater force of human connection.

Abraham’s campaign stroke a chord with various people from every tribe, clan and group in Babylon. As they joined him, they became a mini-model of humanity, and a microcosm of global unity. The name of that movement was Israel.

Over the generations, the group grew in scale and took the shape of a new nation among the nations of the world. Their spiritual leadership was continuously engaged in developing and teaching the method of connection to the people. Beside them were administrators and officers, who followed their direction and shared the same purpose of keeping the people united.

The golden age of the unified kingdom of Israel was during the time of the Second Temple. It was a rather short, yet very significant period. Then, egoism had erupted within the nation on a whole new level, causing division and hatred that finally led to the dispersion of the people of Israel.

Throughout two thousand years of continuous exile, the people of Israel became assimilated and integrated among the nations of the world. The mini-model of humanity that was born in Babylon, was now reconnecting with the whole of humanity, absorbing desires, qualities and characteristics that have been brewing throughout the world for generations. Thus, today’s Israel is a mirror of the entire world.

At present, the stiff-necked Israeli ego is drowning everyone: the public is preoccupied with economic survival and fears for its security. People are desperately frustrated with their elected officials and tired of dealing with yet another election campaign. The candidates, on the other hand, are those with extremely sly egos who go out of their way to hold onto power and attack those who threaten their throne.

However, there is a certain group of people whose egos are more evolved than both the public and the politicians. Paradoxically, those who engage in developing their connection by following the wisdom of Kabbalah – the up-to-date version of Abraham’s method – discover within them the most powerful ego.

Kabbalists, however, are well aware of their egotistical nature and work with it in a mature way. The authors of the Book of Zohar describe this dynamic from their own experience: “At first, they look like war-mongering people who want to kill each other. And then, they return to be in brotherly love.” (Zohar, Acharei Mot, 65).

According to the wisdom of Kabbalah, Israel’s good future depends on those who work on unity above their differences. When they experience a sufficient amount of pressure, and unite according to Abraham’s way, they will become the spiritual leadership that the people of Israel unconsciously wish for. And just like in ancient times, an operational government will form around them, imbued with the same spirit of unity.

The upcoming elections in April 2019 could be a springboard towards this future. As a first step, we must create a new kind of competition between the parties: Each party must convince us that it is fully committed to the unity of the people. Not only through well-articulated speeches, but by presenting their practical plans for promoting the unity of the people from the moment they take office.

The different parties don’t need to waive or compromise their views, but rather prove how their positions contribute to the unity of the entire nation, and not only to the benefit of one faction. In other words, they must demonstrate their willingness to act for all sectors of society.

However, no one expects their plans to be precise and satisfactory. It’s also obvious that their motivation is not pure. But herein lies the magic of Abraham’s method: When we begin to play, research and explore how to bring about unity among us, we activate the latent mechanism of nature that connects us. Nature’s inherent wiring of human connection will gradually build within us a new mind and new feelings, a new perception of reality and a new sense of connection between us. 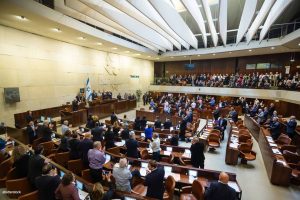 “The Scornful”—Internal Obstacles In A Person

Rabash, “According to What Is Explained Concerning ‘Love Thy Friend as Thyself’”: “However, after all the meetings, everyone calculates and sees how much they have received from the association for the self-love, what the will to receive has gained by that, since they invested time and effort to benefit society. So what have they gained by it? One could probably succeed more if engaged in self-benefit, at least the part of his own efforts. But, “I entered the association because I thought that through it, I would be able to gain more than I could gain alone. But now I see that I have gained nothing.”

When someone wishes to say that love of friends should be engaged in for the purpose of bestowal, that everyone should work to benefit others, everyone laughs and mocks him. It seems to them like a kind of joke, and this is a seat of seculars. It is said about it, “but sin is a reproach to any people, and every grace that they do, they do for themselves.” Such a society detaches one from holiness and casts him into the world of mockery. This is the prohibition of the seat of the scornful.”

As a person advances, his egoism grows, and he suddenly feels that he is starting to disregard and sneer at the organizational principles of the Kabbalistic group. This emerges from within a person and he needs to work with such disturbances correctly, turning them into help.

Everything is only about internal work.

Question: What if a person feels that his ten suddenly turned into a gathering of the scornful?

Answer: This also requires inner work because everything that appears to him as happening outside actually takes place inside of him. He sees his own internality.

Question: So he must continue to work in the group?

Answer: A person leaves the group only if the entire group thinks that it does not need to follow the path of connection. Other than that, he needs to start with the fact that everything he sees he observes through his own egoism.

Question: And how does he work with this? By elevating the importance of the goal?

Answer: First and foremost, he elevates himself. This is how he checks himself. If he changes himself and sees that the group has changed, it means that these were his personal leads.

Question: And if he sees that he is now the scornful: he is sitting and inside of him laughing at everything? What can he do to rejoin the friends?

Answer: Let him ask for help. He may even explicitly turn to the friends to help him.

Question: Is it possible that the Creator brings people to the group and at some point it turns into an assembly of the scornful?

Answer: Everything is possible. Therefore, it is necessary to discuss it all and mainly engage in Arvut (mutual guarantee). If a group works correctly, then the scornful are only internal disturbances in each member relative to others.

Gradually, a person begins to feel that there is nothing external. He sees everything in front of him, including the Creator, and everything that he can imagine, as existing inside of him.
[235509]
From KabTV’s “The Last Generation” 4/18/18

Related Material:
Do Not Block The End Goal
Don’t Sit In The Seat Of The Scornful
Kabbalistic Associations

Writings of Baal HaSulam, “The Freedom,” Title “Two Creations: A) Man, B) A Living Soul”

Writings of Baal HaSulam, “The Teaching of the Kabbalah and Its Essence,” Title “Giving Permission”