The evolving global #egoism, the basis of our nature, encourages governments to lower social support for society, deliberately worsen the living conditions of citizens, abolish the rights & protection of the poor.
#poverty
Kabbalah: this can be changed only by a radical reorganization of #society. #inequality

In words, liberals are fighting for unification and #Trump—opposes it. But nowhere have liberals succeeded in unity. Not a single left party!
Our ego-nature won’t allow us to unite.
But the world has to move toward unity!
The Upper governance is driving us into a dead end …
—a Good year! #NewYear2019

I would like to wish everyone what we lack most: connection—togetherness—love
For 2019 to be the year of actualization of the law “Love others as you love yourself.”
Let’s make this year a happy year in the history of the entire world! #NewYear

We don’t need to correct our #egoism. It’s impossible!
It’s just necessary to feel hatred to it as the source of all evil.
In that case Kabbalists will teach us how to attract the power of good to our egoism and reform it.
In nature there are Evil and Good …
… but to acquire the Good you have to want it! #Kabbalah

The world is trying different forms of unity, but it’s getting worse.
This indicates that we are already close to realizing the evil of #ego, our nature.
It’s our very nature that doesn’t allow us to unite.
Unity is possible only in rising above personal #egoism.
We must recognize it as #evil! #personaldevelopment

Nature pushes us to unite, and egoism pushes away. So we find ourselves between two forces: Pharaoh and the Creator.
Gradually, the Creator brings us closer to “Mount Sinai”: if we do not agree to unite, the world will bury us.
Gradually we will have to understand and accept this.

Liberals and other leftists calling for unity will lose.
Trump will lose also.
Nature develops so as to bring all its parts to a single connected system.
The solution is to reform egoistic human nature to true altruism, and then to unite all the parts into the system called Adam.

The main focus is on explaining how to develop and organize groups, which will draw the reforming light. This is the only way to educate people.
It isn’t a distant prospect, but an urgent need to be realized in the masses. By doing so, we’ll feel how society is reformed from day to day
From Twitter, 1/1/19

I hope that 2019 will be a year of revolution in the hearts of people. A year in which we will open our eyes and see very clearly that we are pressed up against a large wall, and that we have the ability to do things differently in the world—feed every person, care for every needy person, educate every child, ensure every family’s basic necessities, provide security for each country and preserve the climate. The human ego will reach its limit, and then the change will appear to be so simple.

But it is only when the obstacles and pressures intensify and we see we have no choice that we will recognize our evil egoistic nature—a separating and dividing force, to whom we are all enslaved. Then we will open our ears, and gradually our hearts as well, and realize that we really have no choice but to unite.

May this be a good year, a year of recognizing our inherent evil and connecting to good. 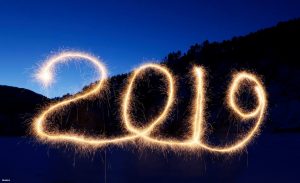 The Times of Israel published my new article “What Lies Ahead For Jews In 2019?“

2018 was a good year for Jews. This statement might appear to a contradict the facts in light of the rampant anti-Semitism that erupted in basically every corner in the world, but the surface evil can be transformed into an opportunity to fix what is broken, to be seen as an awakening to build a completely new scenario and a more promising future for all. However, this outcome depends solely on us, the Jews.

Back in October, America experienced the deadliest attack on a Jewish community in US history at the Tree of Life Synagogue in quiet Pittsburgh. In other American cities such as NYC, the police reported more hate crimes against Jews than against all other targeted groups combined. Out of 352 hate crimes reported during the past year by the authorities, 183 were considered anti-Semitic incidents, including unprovoked physical attacks and vandalism against Jewish places of worship.

In Europe, an extensive CNN poll revealed what we knew but not everyone wanted to admit, that anti-Semitism in Europe remains inextricable: it is deep-rooted and widespread. The CNN survey queried more than 7,000 people across Austria, France, Germany, Britain, Hungary, Poland, and Sweden. Approximately 1 in 4 said that Jews have too much influence in business and finance, in the media, and in conflicts and wars around the world.

Bigotry against Jews often escalates into threats and actions. This past year, wearing a kippah in Paris or Berlin, among other European cities, no longer felt safe. Some Jews felt compelled to stop wearing them to avoid possible assaults. Jewish communities on the Old Continent expressed fear of physical attack, according to a recent study conducted by the European Union. The poll also highlighted the fact that sentiments of hated toward Jews were at a record high across the region.

The anti-Semitism exposed in 2018 can be likened to a doctor’s appointment where an uncomfortable but completely treatable diagnosis is received. No one is happy to discover a sickness, but without the diagnosis, there can be no treatment for the illness. Therefore, an accurate evaluation is the beginning of a cure, making the treatment possible that opens the door to total health.

Accordingly, let’s use the diagnosis of intractable anti-Semitism to improve the prognosis for 2019 by digging deep into the matter. What is the reason for the world’s animosity toward Jews?

The wisdom of Kabbalah explains anti-Semitism as a symptom of a deeper problem: the lack of unity among the Jewish people. As Rav Yehuda Ashlag wrote in his paper “The Nation”:

“It is clear that the immense effort required of us on the rugged road ahead requires unity as strong and as solid as steel, from all factions of the nation without exception. If we do not come out with united ranks toward the mighty forces standing in our way then we are doomed before we even started.”

The duty of the Jewish people and its reason for existence is to be a light unto nations, to influence the world through wisdom and unity, not by power. When we Jews avoid this task, the world feels we prevent them from reaching wholeness and fulfillment, which manifests as irrational and vicious anti-Semitism to pressure us in order to accomplish our mission.

As Rav Moshe Chaim Lozzatto (Ramchal) wrote in Essay of the Tenets:

“You should know… that Creation as a whole will not be completed until the whole of the chosen nation is arranged in the right order, completed in all its decorations, with the Shechina [Divinity] adhered to it. Consequently, the world will reach the complete state…We must come to a state where the nation is fully complemented in all the required conditions, and the whole of Creation receives its completeness, and then the world will be established permanently in the corrected state.”

Now that we have identified the root cause of anti-Semitism it is up to us to turn 2019 into a year of restoration for the Jewish nation into a whole and amalgamated unit. Such a unifying restoration is capable of creating a magnetic field that could attract the positive force from nature and radiate it to the entire world. Such an act is capable of bringing tranquility and happiness among the Jewish people, which would then spread out to humanity, and return back again to us. It is my hope that we will succeed in undertaking this self-examination and make strides toward realizing our role in the world over the course of 2019.
[239060]

Writings of Baal HaSulam, “The Teaching of the Kabbalah and Its Essence,” Title “The Meaning of Unity”