The Ethiopian Challenge Within Israeli Society

They may look like scenes taken from major US cities like Chicago or LA were racial tensions between a black minority and the police sometimes erupt, but in this case, the protests and riots are taking place across Israel after an unarmed Ethiopian teenager, Solomon Tekah, was fatally shot by an off-duty cop. The shooting and ensuing social unrest opened up a new fissure in the already-cracked Israeli society. It reveals the deep separation tearing us apart and putting Israel in jeopardy. However, this painful eruption also provides an opportunity to turn things around for good through education, the only comprehensive solution possible for this crisis.

The immigration of Ethiopian Jews to Israel began in 1950 through the efforts of the Jewish Agency. Two additional massive waves of immigration followed, Operations Moses and Solomon in 1980 and 1990 respectively. Since their arrival, the Jews of Ethiopian origin in Israel number around 150,000 people. Almost half are now part of a new generation already born in this country, and yet their living conditions are far less favorable than the average Israeli population in terms of standard of living, education and job opportunities.

As an immigrant myself, my acclimatization to Israeli life was relatively easy and convenient in comparison, as was that of most of the immigrants from the former Soviet Union. But there cannot be a comparison between immigration from Russia and immigration from Ethiopia since the cultures are vastly different. In the 1970s, I vividly remember how I was thrilled to witness the arrival of Ethiopian Jews in such enormous proportions. To me, it seemed to somewhat signify the end to the exile of the people of Israel from the land of Israel, which our forefathers dreamed of.

Unfortunately, members of the Ethiopian community did not discover in Israel conditions that suited their mentality and culture. Despite the efforts that have been made in recent years to fully integrate them into Israeli society, there is still much work to be done. The painful wound of feeling marginalized has not stopped bleeding since the very beginning and no band-aid treatment will cure the illness today. On the other hand, an all-inclusive educational solution to this problem is required as an important precedent to complete the healing of the general rift in Israeli society and the fragmentation that destroys us on a daily basis.

The latter is the main role of the entire Jewish community: to urge Israel to develop a correct attitude to its situation, to recognize the divisive drives within us that hold us back, which make us connect to stigmas and nationalities instead of transcending them with unifying values above the differences. What the Ethiopian community can reveal to us all is the extent to which we live in denial of discrimination, and the true extent of conflict and separation between the Jewish people.

Raising awareness of how divided we really are should ultimately make us want to seek out a solution: the education of values that will rebuild us as a unified society above our differences, “as one man with one heart.” We need no more than to be aware of the division that tramples our unity. The heart of the current debate should therefore be the realization of our division, how much it hurts us, and the need for us to unite above it.

As long as the relations between us remain distant and there is considerable friction between the ethnic groups and sectors, then the Ethiopians should continue to organize themselves, unite more and continue struggles for their rights.

Violence and disorder are out of the question. However, within the framework of the law, any public activity they will be persistent with will eventually seep through. As a first step to preventing unfair treatment and restoring security, there is room for internal consolidation. However, this is merely a stepping stone in order to move toward creating a more stable and peaceful society based on the principle of “Love your neighbor as yourself.” 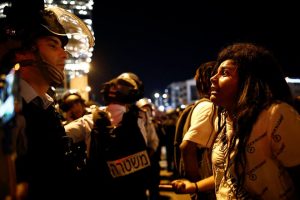 Power Of Thought And Solving Problems