When a person humbly goes through all problems as coming from the Creator, then precisely in the contradictions and threats that he feels, he reveals adhesion with the Creator as the only force and power.

Revealing the Creator, His power and perfection cover all the previously manifested contradictions, to the extent that, in the revealed perfection, it appears that the sufferings we previously experienced are related to the feeling of unity and perfection that is being revealed.

If one creates efforts above oneself, feeling bitterness in the work, not seeing the result for himself nor for others, and the greater the efforts—the greater the bitterness, until the efforts and suffering accumulate to a degree when the Creator takes pity on him and gives him taste in work above the desire.

One must decide whether he wishes to annul before the Creator, to fulfill only His desires. After deciding to annul himself in everything, he asks to be able to do it.
Seeing that the body does not agree, he asks to completely annul himself, without leaving any desires.
This complete prayer is prayer for a whole desire.

It is difficult to attribute evil actions to the Creator, for He is all good. And only to those who subjugate to His rule is His personal management revealed, that He is the source of all actions. And a person connects with the actions of the Creator.
And the difference between good and evil disappears. This is the main action of man!

All the qualities that a person uses to realize his connection with the friends are necessary for work with the Creator. And are originally created in man for his work with the Creator. But one must study and develop them in order to properly use all of them to receive the Upper light for the sake of the Creator. (Baal HaSulam, Introduction to the Study of the Ten Sefirot 68)

Faced with major world disturbances, our small efforts toward correction are counted as big.
Therefore, it cannot be assumed that the world interferes with our spiritual work; on the contrary, it helps us! Without such interference we, being weak, could not correct anything.

After great protests from the ego, when a man disagrees with everything, even the Creator, at the peak of revolt, of jealousy of other’s success, hatred of rivals, he suddenly feels calmness, the Creator is letting him realize what the humility sent from above means.
He must develop it!

I rejoice at the problems that arise, but suffer from those still hidden, for they must unfold from their root, which they all initially stem from. Therefore, I rejoice in their disclosure, for by relating them to the Creator by faith above reason, I correct them all.
(Baal HaSulam Letter 5)

The Creator controls everything, but man has to reveal it, to determine that the concealment is also the Creator’s rule: a patient, having received the doctor’s medicine, is cured, but he must believe that he would’ve been cured even without the doctor, for this was predetermined by the Creator. That is how he relates concealment to the Creator. (Baal HaSulam, Letter 16)
From Twitter, 3/12/19

Thirty days to the elections in Israel, Israelis are so entrenched in their daily fix of political and cultural bashing, that they barely notice the global resurgence of anti-Semitism.

A giant parade in Belgium featured floats of two Hasidic Jews reaching out for money with money bags behind them. In the U.S., the Democratic Party softened its condemnation of anti-Semitism and made do with a lukewarm announcement, pledging to “combat hate of all kinds.” The next day a fan of the Berlin Union football team caused an outrage by tweeting that Israeli footballer Almog Cohen should be sent “to the chamber.”

However, the fact that headlines are increasingly drawing attention to the Jews is welcome, because all of us must begin to ask some serious questions about the root of anti-Semitism and the connection between the Jews and the rest of the world.

Let us briefly recount the birth story of the Jewish people: Some 3,800 years ago, in ancient Babylon, a priest named Abraham traveled to the various the tribes and clans who lived there. Amidst the growing human ego, he was looking for individuals who were willing to choose unity above all differences.

Thus, Abraham assembled a group of representatives from the cradle of civilization and turned them into a model of global unity. They learned how to discover the deeper binding force of nature, which connects human beings above all their differences.

Over time, that group left Babylon and grew in scale to the proportions of a nation. As long as they maintained their unity, they also radiated it to the rest of humanity. Or in other words, they were being a “light unto the nations.”

However, the human ego continued to grow out of control and ultimately led to division and conflict among the Jewish nation, just as it did among the rest of the world.

And so, Jews have forgotten their destiny. We have forgotten that if we abandon the unifying force that guides us, we no longer serve our purpose in the world, and invite hatred against us. As Kabbalist Yehuda Ashlag, “Baal HaSulam” wrote, we have forgotten that “the Israeli nation had been established as a kind of gateway, by which the sparks of purity will flow onto all of mankind across the world, until they develop and come to understand the pleasantness and serenity of love of others.”

If we do not rekindle the same kind of connection that has established our nationhood, and has been dormant for some 2,000 years, anti-Semitism will never stop.

The major difference between today and the 1930s is that it was only the Führer of Nazi Germany who openly pushed for the extermination of the Jews. From now on, manifestations of hatred towards Jews will multiply everywhere in the world. It will transcend geography, culture, religion and language. Anti-Semitism will not distinguish between a Republican and a Democratic Jew, a religious Jew or a secular Jew, an Ashkenazi Jew or a Sephardic Jew.

It is also a mistake to think of the State of Israel as a place of refuge. As things will escalate, it will be easier for the world to push the Jews to a place where they can isolate and sanction them.

The only place of refuge is our connection. Just as it was in Abraham’s tent: unity, love, caring and mutual responsibility put us in contact with the binding force of nature itself, so we can share with the rest of mankind. This is the only way to fulfill our true role in the world, and stop the growing waves of hatred towards us.
[242789]

When I look at the resurgence of anti-Semitic propaganda, I see a desperate demand of people to free themselves from their sense of dependence on the Jews.

Both Jews and non-Jews will ultimately have to realize that liberation from hatred depends on the transcendence of all humanity above the divisive egotism.

Human unity is the only solution to all the evils in the world. The wisdom of Kabbalah explains the intricate dynamic of the human network, the root of anti-Semitism, and the means to achieve unity. 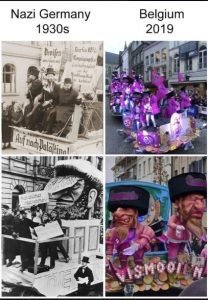 Is There Any Selfless Bestowal In Our World?

Question: Are there any examples in our world that illustrate reception for the sake of bestowal?

Answer: Suppose someone wants to give me a gift and brings a box of chocolates. I have high blood sugar and do not eat sweets. But I accept this gift because the person gives it to me with all his heart. But in principle, I receive it in order to bestow my good attitude to him.

In our world there is no example of true receiving for the sake of bestowal. There is not even such a state as bestowal for the sake of bestowal. Here, everything is selfish, egoistic, and performed only for one’s own sake. Otherwise, we cannot make any movement: not in thoughts, desires, or physically. We would have no energy for it. We are destined to receive. This is how we are created.

In order to begin to bestow, to live in bestowal, we need completely new energy—the energy of bestowal. We begin to receive it only by studying in a group. And then we gain the opportunity to gradually reach the properties of selfless bestowal without consuming any egoistic energy. After all, we will receive energy from the Creator.

I approach the Creator as I approach the sun: I receive energy from Him, and therefore, I can bestow. Only in this way can we act in spirituality.

Related Material:
Selfless Bestowal
The Spirit Of The Group
A Test For Selflessness

Lesson on the Topic “Surrender (Subjugation)”