Break The Shell Between Us

To subjugate myself does not mean to submit like a donkey so that everyone can ride me. I subjugate in relation to the Creator and enjoy this state, which comes precisely after the strongest eruption of egoism.1

We come to connection from a desperate state, from feeling lost and powerless, when we are crying and demanding help from the Creator. Otherwise, we would be unable to feel connection in the right place—in the heart, in the desire.

Connection is a feeling of mutual dependency, when I feel that I fully depend on others: on their success, achievements, health, on everything. That is why we are attached to our family, because we understand that we depend on it. If family members are healthy, it is good for me; if they are successful, this also benefits me. This is how our desire to receive works in its most primitive form: pleasure/suffering, detachment/connection, pain/absence of pain.2

The full measure (Seah), after which a qualitative change happens in us, is made up from the quantity and quality of changes that includes the number of actions, the number of years, and the total of invested efforts. Those are quantitative indicators, but from quantity comes a new quality.

All our efforts are aimed only at softening our hearts. The full measure means that the shell of our heart is broken. The heart is covered in a shell, and it must be broken “to get to the answer.” Even one crack is enough in order to begin feeling some contact with spirituality and our shattering. Prior to this a person does not even feel the shattering, his heart is just deaf.

It is impossible to break the shell with one blow. This is similar to the way a chick hatches from an egg: it knocks and knocks at the shell until it cracks and allows it to get out. However, in our case it is even more difficult because the shell not only does not break with one blow, it is also impossible to break it alone, but only together with the friends! This will take a lot of strikes that are made together.

Then whose shell am I breaking: mine or a friend’s? The shell is neither mine nor his, but it is between us. As it is written, “They helped every one his friend.” The friend knocks from his side and I knock from mine, and only together will we be able to break this shell between us.3
From the 1st part of the Daily Kabbalah Lesson, Baal HaSulam, Introduction to The Study of the Ten Sefirot, item 74
1 Minute 0:59:45
2 Minute 0:60:00
3 Minute 1:43:40

Always With You – My Teacher The Rabash and I

My teacher, Rav Baruch Shalom HaLevi Ashlag (The Rabash), was unique in his generation; a hidden Kabbalist whose only goal was to educate a new generation of Kabbalists by developing a spiritual method that would suit every person in our generation. I followed him wherever he went and aided him in every way I could.

Upon his passing in 1991, I continued my teacher’s unique path. I established a group of Kabbalists, and named it after him – “Bnei Baruch” (the sons of Baruch). Over the years Bnei Baruch has become an international movement made up of hundreds of thousands of students in Israel and around the world, who study the authentic sources of Kabbalah and share it with the world.

By implementing the Rabash’s method, we can discover the complete, eternal reality that has been revealed to Kabbalists of all generations.

Have a look at the photos I’m publishing for the first time, from my earliest days of studying the wisdom of Kabbalah. 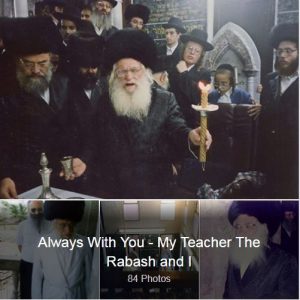 The spiritual comes not only by getting closer to spirituality, but also by distancing from it, when egoism gets revealed and demands its fulfillment.
And in one’s efforts to go above it, relating everything to the Creator, a person attains, in joy, the quality of bestowal and submission—degree of Moses.

The condition for receiving of the #Torah: to be in lowliness of sensation and understanding.
And if you agree to remain in it, exerting efforts in joy, as if there is nothing greater than this state—then this state is called small (Katnut), and should be permanent.
While the large state (Gadlut) is temporary, additional.

Feeling only the light on the path, a person can’t determine whether he’s in the states for the sake of the Creator or for his own. Therefore, a state of darkness comes from above, and if he continues to work for the Creator with joy, it means that he is in the state of bestowal.

About my #Teacher
The more time has lapsed after Rabash’s passing, the closer I felt to him.
Rabash gave all of himself. There was never a moment when he would do anything for himself. Everything was flowing only in one direction: from oneself to others.
And he infected me with this flow.
photo album>>>>>>>>

About my #Teacher
I felt RABASH pushing me forward. I had no choice but to advance like him without deviating or yielding to temptation, I had to do everything to pass to the world what he wanted me to, and what he’s given me. I felt this responsibility on me.

It is believed that people of Sodom had terrible relationships.
But the only condition they had was to strictly and invariably abide by the rule “mine is mine, yours is yours,” which is absolutely opposite to love of friends.
But neither steal, nor harm, nor profit from the other—everyone within himself!

No education in the world can change the nature of man from egoism to altruism. Only Kabbalistic education, since it brings out the quality of love and bestowal from the Upper nature, the Creator, is able to correct our #egoism into its opposite quality, #altruism.

Baal HaSulam, The Last Generation: The egoistic system is based on envy and hatred. People will never get rid of them. If capitalists are not taking the blame, the hatred will turn toward #Israel. Nothing will cure the nations from their hatred of Israel except the altruistic system.

Baal HaSulam. The Last generation: The people of #Israel are hated by all the nations. This #hatred is primary, concerning all arguments, each one motivates his hatred according to his own psychology.
The only solution is to practice moral inter-ethnic altruistic relations.
#AntiSemitism #hate #internationalrelationships

Baal HaSulam. The Last Generation: Freedom of individual must be upheld unless he is harmful to society. But if someone wants to leave and enter a different society, he should not be stopped even if it harms the environment. Unless it leads to the destruction of society as a whole.

Physicists started talking about reality of the world again—is there an objective to reality? How can it be observed if the observer is not objective? Is there free choice?
Kabbalah: there is no reality. We depict the world inside us.
Tuning to reality occurs to the extent that you get rid of your egoism.

People are living longer, becoming even more concerned about providing for their lengthy old age. Whether they can work in their old age. Save for old age. Clearly long life doesn’t make us happy. Such is the world we created for ourselves. This is what our ego has driven us to.
#elderly #Happiness #oldage #retiredlife

In the process of building a Kli, I begin to feel how the Upper one starts to help! He transforms into me and helps me, like a mother playing with a child, helping him build a house with blocks. When I try to do it and can’t, I feel that He helps me understand correctly …

The only form the spiritual has is the one we build with our desires. We are given only the informational record from above (Reshimo), we build the form ourselves. From the upper degree we are given strength and intelligence for its realization, at our request.
I build the world with efforts, I draw it on the background of light.

The Creator is revealed only through my efforts to stay connected with Him.
He leaves me only one point free of Him for my response. In it, my “I” can be manifested. This point is revealed in me if I can hold on to the Creator controlling me from above, in thoughts and desires.

Our whole life is building a puzzle. This puzzle contains the intention of the Creator who made it. Therefore, building this puzzle, with a conscious desire to know its creator, we come to attain Him. We are initially made in such a way that by finding the Creator of the world in our current state, we come to reveal Him.

A Place For Everyone In The Ten

Question: There are active and passive friends in our ten. Sometimes a desire arises to form a core from the active friends, but on another hand, it looks like there is a ten within a ten. Should we distribute our attention evenly and focus it on absolutely everyone in order not to fall apart?

Answer: In my opinion, the way ten is formed, let it remain so. There is no need to shuffle them. The ten is a spiritual unit. It should have everything: the core, the laggards, the achievers. Therefore, it is not necessary to change something in it by force. It should be taken into consideration that there is a place for everyone.
[241652]
From the Kabbalah Lesson in Russian 2/6/19

What does the Sabbath day symbolize for us on which the entire family gathers for a communal meal, what is the idea of resting on the Sabbath and what is the power of the connection between us?

The Sabbath symbolizes the end of the correction of human egoism and is above nature. The integral power of human connection is discovered on the Sabbath. It is a day of healing and rest. It is love, connection, and reconciliation.
From KabTV’s “New Life #171 – The Sabbath,” 4/23/13