“Looking back, my wife saved my life,” recalls my veteran Chinese student from Beijing. “On the night of June 4, 1989, I went to sleep in the student dormitories only because my wife insisted that I won’t spend the night in Tiananmen Square again. In the middle of the night, I woke up in panic to the heart-wrenching sounds of cries, and I realized the worst has happened: the army started shooting the protesters, who wanted to make their country better.”

“Tears shed from my eyes like a waterfall, as I was struggling to believe it actually happened. I had to go there and see for myself. My wife and I jumped on our bicycles and rode towards the square as fast as we could.”

“As we approached Changan street, a military helicopter circled above us, using a loudspeaker to warn protesters to evacuate the square immediately or else the army would act. The closer I got to place where the shooting started, the more blood I saw on the streets, and horrible cries deafened my ears. I realized that we had failed. That I had failed. That the nation had failed.”

“My dream was gone as my nation missed its best opportunity to change for the better. The sky fell and reality turned black. This was the breaking and turning point of my life. That morning I cried more than I would cry over the next decade.”

***
Twenty-six years later, I stood in that square, which can hold up to ten million people. Hundreds of thousands of Chinese surrounded me. Such a huge and unimaginable amount of people, yet I felt alone. Not because I was a stranger in a foreign culture, but because the presence of the Chinese people is fundamentally different from that of the Western man. Yet, even that is changing today.

Over the last thirty years China has been developing at lightning speed. China’s “One Belt, One Road” initiative embodies an aspiration for global domination. An ambitious attempt to connect the world through a network of roads, railways, lanes, and harbors. After many years in which China has been largely absorbing from the world, it is now breaking through and sending its “agents” to every country and in any field.

This also explains the Chinese stubbornness against Trump’s trade war, and its aggressive entry into the global economy. There is, however, a significant difference between the two superpowers: China has enormous resources —steel for example—but it doesn’t necessarily know how to best use them. America possesses the main powers to innovate, while China is best at creating high-quality copies and “Made in China” replications.

The technological and economic developments on the surface are only the side effect of the deeper desire that drives the Chinese nation. It is the will of the Chinese people that is actually leaping into a significantly new and higher level of development.

After thousands of years of surrender and obedience to the ancient Chinese philosophies that maintained the Chinese people in a balanced relationship with each other and with nature, the dormant ego of the “Chinese giant” is awakening in all its splendor. Now every Chinese has a strong desire to stand out, get rich, and be number one at everything. To fill oneself up as much as possible and no longer settle for a bowl of rice.

In other words, the development of human nature, the growing egoism that characterizes all of humanity, did not skip over the ancient and closed off empire. If during the centuries of the Middle Ages of Europe the rebirth of Western civilization took place, a similar change is taking place in China within only a few decades.

From a global perspective, the accelerated development taking place in China will happen even more rapidly in Africa and South America. The ever-evolving desire to receive pleasure, is both the engine of human development and what shapes everything we see in it—culture, society, government, economics, technology, fashion and all the rest.

Baal HaSulam, the great Kabbalist of the twentieth century, writes in his scientific language: “The will to receive is whole substance of Creation, from beginning to end. Thus, all the creatures, all their innumerable instances and conducts that have appeared and that will appear, are but measures and various denominations of the will to receive.” (“Preface to the Wisdom of Kabbalah”).

Ancient Chinese philosophy was well aware of the desire to receive that drives everyone. It also recognized the need to bring it into balance and mutual accord between people and in their relationship to nature. But it only applied these principles on the material level. Confucianism is very earthy and materialistic, it is moral, collective and simple.

Decades after the mass disengagement from the ancient philosophies that established the concept of Chinese man, additional changes today no longer allow the suppression of desire within the Chinese nation. It is a necessary, natural, and inevitable process, towards a new, spiritual level of development.

Both China and the world, the East and the West, all face a paradigm shift. The Western world has already taken a few steps forward and is sinking into a crisis. People feel emptiness, depression has become the number one cause of disability, the youth is disoriented by the virtual world, drugs and prostitution are everywhere, and the list goes on. China is now racing on the same sweet-sour track.

In the not-too-distant future, both Western and Eastern cultures will have to rediscover balance with nature on a level that we haven’t known before. The way to balance the growing desire is not through oppression, but by creating a counter-force—the sense of mutual, complete and harmonious connection between us.

Humanity is about to discover the natural binding force that connects all of us to a single human organism around the planet. Only this new awareness will enable each nation and every person to properly integrate with the rest of humanity. Then, a new spiritual space will open up, along with an understanding of how to balance the human desire without suppressing it, and how to fil it with a new kind of spiritual fulfillment.

Then every nation will find its place in the human mosaic, and the people of China will discover a new humanity, connected and round like Tiananmen Square, the largest city square in the world, called the “Gate of Heavenly Peace.” 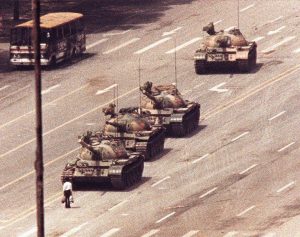