Perception In The Corrected Qualities

Answer: In Kabbalah, there is only one way of perception, the absolutely accurate attainment in our corrected qualities.

Obviously, these qualities are different and are graduated on the same egoistic scale: to the extent that we can rise above our egoism, we can discern the Kabbalistic space. It is almost the same as in our world.

In our world, there is an egoistic consciousness. Everything that we feel in it, we somehow evaluate, describe, and from this our sciences originate.

However, if we change our egoistic consciousness to an altruistic one by exiting ourselves, (without disturbing the field around us with our presence, meaning how much, while being in it, we feel it, and not ourselves), from this our information about the upper space is formed. This is the subject of the study of the wisdom of Kabbalah.
[280990]
From KabTV’s “Meetings with Kabbalah” 3/29/19

The Recognition Of Evil

Question: Why is it that the more I study and the more I am in the group, the further away I feel from the goal?

Answer: This period is called the recognition of evil because a person discovers his real state, his nature.

If he thought that by coming to the group he would study and accumulate some knowledge, now he begins to feel what a big egoist he is and that he needs to do something about it, that he has to correct himself. Before he did not even think about it, but now he sees how weak he is, that he cannot manage and control himself to such an extent that his thoughts and his desires overcome him, and he cannot do anything about it.

This is the reason for the expression, “he who is greater than his friend, his desire is even greater,” but this is actually how we advance.

So, if you feel that you have become worse than before, it actually means that you have become better, which means, closer to the goal, but still, unless you mortify your egoism, unless you ascend above it, you will not begin to control it by receiving the force against the ego from the Creator. So unless you do that, you do not exist, and the ego, the force of the Creator, manages you and does whatever it wants with you. We need to put an end to this.
[246725]
From KabTV’s “Fundamentals of Kabbalah” 4/9/19

Related Material:
What Is Recognition Of Evil?
Victory Over The Creator
There Is No Love Without Hate

“May My Name Be Upon You”

Question: Why is it prohibited to pronounce the four-letter name of the Creator “Yod-Hey-Vav-Hey”?

It cannot be pronounced because it has no realization in the language but can only be realized inside the spiritual desire. There are many other names of the Creator: Elokim, Adni, Shadai, etc.

I call it according to my feelings. Therefore, there is nothing special or exalted in this name to be afraid of. On the contrary, you need to attain it, get into it, so that it becomes completely yours, as it is said: “May my name be upon you.”
[280679]
From KabTV’s “The Power of The Book of Zohar” #10

A Single Common Thought In The Ten

Question: There is an individual thought and there is a collective thought. How can we correctly form a single thought in the ten?

Answer: The single thought should be the result of the whole ten aiming at unity, aiming at everyone dissolving in one single whole called one, single, and unique.

So when the friends gather in such homogeneous unity, it is possible to speak about the right connection between them and about preparation for connection with the Creator who is revealed between them.
[246838]
From KabTV’s “Fundamentals of Kabbalah” 2/3/19

Passover From The Point Of View Of Modern Realities, Part 10

Question: When the Jewish people approach the Final (Red) Sea, Yam Suf, suddenly this sea opens up. Behind, the army of Pharaoh, in front, the sea, and it parted. What needs to happen for a person to suddenly see the sea or water mass is his salvation?

Answer: The deep sea can only do one thing: kill me completely. And I agree to this state, to die spiritually, physically, no matter how, just not to remain in the captivity of my egoism. Egoistic slavery is worse than any other condition, so I throw myself into the water.

Question: We are not referring to the suicides that occur in our time, are we?

Answer: No! What does that have to do with it? Is there any movement toward this in our time? Does it come from the same reason? No! In our time, it’s all out of boredom.

Question: There is an opinion that not all Jews came out of Egypt. Were there Jews in Pharaoh’s chariots that chased the Jews?

Answer: These are the so-called Erev Rav (mixed multitude). These are the Jews for whom being in Egypt was a blessing. They want to stay in their egoism and believe that they are right. And they have the Creator in this egoism, and He does not need to be approached by correcting themselves to love others, and through love of others to love the Creator.

We don’t need any of this: “We can live here, calmly, well. We do not need the land of Israel, and we do not need to go there at all; when the Creator wants, He will lead us there himself, but in the meantime we will sit here and wait.”

Question: In the story of the exit from Egypt, we see that chariots are destroyed, although someone is saved. They say that some strange people joined the Jews and then chased them through the desert. How does this happen? All the same, these people who do not agree to follow the predetermined path, this goal, will be destroyed?

Answer: This is Erev Rav, the “mixed multitude.” There are a lot of them, they surround the Jewish people from all sides. By their origin, they are Jews, but they do not feel that they should go to the Creator with their thoughts, with their motives, in “love your neighbor as yourself,” in unity with each other.

Throughout Jewish history and today too, they see their mission only in preventing the movement of the Jewish people to build a temple, that is, to create such a connection between themselves in which the Creator would be revealed.

Question: Who will win in the end?

Answer: In the end, of course, they will not win. But looking at what is happening today in the Jewish people, we see what power they have.

Question: How can a person at any given time, being in the environment that he has, correctly distinguish between Erev Rav and Jews who are going to the goal?

The most important thing is the connection, because in it egoism is gradually destroyed and a person rises above his egoistic nature into the quality of bestowal, to the quality of love for one’s neighbor.

And for people who believe that they can exist without connection with others, you can immediately see that they are, in general, sole proprietors, loners. They invent a completely different lifestyle for themselves. Everyone who follows certain rules believes that for him there is already the meaning of life, and paradise prepared for him, and so forth.

In fact, this is absolutely not the case. “Attain your world even in this life”—this is what the Torah, the wisdom of Kabbalah, calls for. And so all their attempts are a big mistake and a disappointment.
[280972]
From KabTV’s “News with Dr. Michael Laitman” 4/12/19

“Understanding The Point In The Heart” (Linkedin)

My new article on Linkedin “Understanding the Point in the Heart” 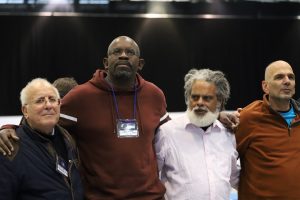 One of the first things people learn about when they first come to study Kabbalah is a concept called “the point in the heart.” We are told that those who come to study Kabbalah, especially those who persist with it despite difficulties and hurdles, are people with a developed, or a strong point in the heart. Those who have it, kabbalists tell us, are more likely to succeed in their learning and advance on spiritual degrees.

Among my students, there are people of all races, faiths, ages, and nationalities. Some of them are highly educated, and some are laypeople; some are sophisticated and eloquent, and some can hardly express a thought. Yet, the one thing they all have in common is a point in the heart, that burning question about the meaning of life. And that point unites them above all differences.

But what is it really? Rav Yehuda Ashlag, aka Baal HaSulam for his Sulam [ladder] commentary on The Book of Zohar, wrote that the point in the heart is really a question. In the beginning of his introduction to The Study of the Ten Sefirot, he writes that the point in the heart is an “indignant question that the whole world asks, namely, ‘What is the meaning of my life?’” Baal HaSulam further asks, “These numbered years of our life that cost us so heavily, and the numerous pains and torments that we suffer for them … who is it who enjoys them?”

These days, many people ask this question, but not many people are driven to search for answers. Many despair and turn to escapism of all sorts. When someone’s point in the heart is strong enough, that person will begin to search rather than give up and sit by the wayside.

Among my students, there are people of all races, faiths, ages, and nationalities. Some of them are highly educated, and some are laypeople; some are sophisticated and eloquent, and some can hardly express a thought. Yet, the one thing they all have in common is a point in the heart, that burning question about the meaning of life. And that point unites them above all differences.

There is a good reason that people with points in the heart easily unite among them. When one studies authentic Kabbalah, one discovers that the meaning of life is found only when connecting heart-to-heart with others. In other words, if we remain confined within our personal space and concerned only with ourselves, we won’t discover anything. This is our initial state of being, and if we don’t develop beyond it, how can we discover anything? Therefore, those who find the meaning of life, find it in their connections with others. When they rise above preoccupation with their own needs and start thinking of others, they discover new worlds, new realms of existence that they didn’t know were there. When this happens, the question of the meaning of life receives its answer. The bonding that people achieve makes them wise and sensitive, and cognizant of all of life. When they achieve this, they understand why they were born, why they live, why they will sometime die, and even what happens afterwards.

In addition, a person who is busy giving is never sad, never dispirited, and is always hopeful and excited about life. Such a person always seeks more people with points in the heart with whom to share that they will find the meaning of their lives in connecting heart-to-heart with others.

Every person has a point in the heart. In most people, it is dormant. But today, more and more people are seeking answers to life’s trials and tribulations. This is why kabbalists have opened the wisdom to everyone, so that anyone who asks, like Baal HaSulam, “What is the meaning of my life?” will find the answer and find peace and happiness.