My new article on KabNET: “Tackling Rising Stress Due to Climate Change”

Global warming is a burning topic. Extreme heat waves, unparalleled in human history, have become a source of rising stress, a problem we no longer perceive from afar but on our own skin. 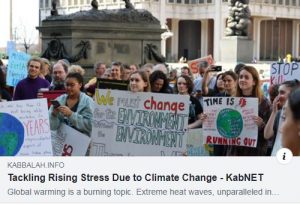 Heat stress is estimated to cost the global economy $2.4 trillion a year in the next decade, according to the United Nations, but the impact on mental health is no less worrisome. Americans are already among the most stressed people in the world, and today’s global warming is not contributing to alleviating the pressure, particularly among the young generation.

Extreme heat might pose health risks that will not let people work, particularly outdoors, leading to the loss of 80 million jobs worldwide by 2030. These are unflattering projections by the International Labor Organization (ILO) that serve as a reminder that there is no time to wait. Tackling the current state will require new paradigms, a completely new way of thinking since the previous ones have brought us to a precarious reality.

Recent studies reveal that people feeling the heat more are the new generation. At the same time, they are the agents entitled to change the failing world inherited from their parents and grandparents. But there is a problem: a staggering 90% of Generation Z between ages 15 and 21 report the worst mental health of any generation in the US, the highest level of stress, according to the American Psychological Association. The stress is reported to be due to gun violence, political turmoil and personal problems. It is the most vulnerable population in terms of mental well-being, and now a new daunting challenge has been charged to them: to carry on their shoulders the responsibility for the future.

“We need to encourage and support the young generation to grease the wheels of recovery, leading humanity to a state of tranquility and balance on all levels in nature.”

The success of the new generation in flipping the situation will depend on how they start behaving. The older generation—for its reckless quest of new industries and development—is destroying our planet. We need to support the new generation’s efforts to stop this hasty and careless tendency. We need to understand that the world is integral, interdependent and increasingly interconnected. Therefore, every action impacts the whole system: the Earth, the cosmos and ourselves. But even before actions, the greatest power we have is the power of thought.

If we become closer to each other, connected through the power of thought, i.e. positive intentions to benefit one another, we will be able to stop global warming and the planet’s deterioration. However, an individual’s concern and thoughts alone won’t render results. The force that will generate a true and effective change can only be activated collectively.

How can our relations be such a powerful force able to change our environment? The reason is that the human level—the highest and most developed in nature—is precisely where the problem resides. Our egoistic nature—personal gain at the expense of others—is the most harmful and destructive force in nature, negatively affecting nature’s lower levels: inanimate, vegetative and animate. Therefore, the way to restore nature’s balance is to repair our broken connection as humans, the root cause of ecological imbalance.

It is clear that in a world where at least a dozen countries have nuclear capacity, there can be no egoistic solution at the physical level. We just have to change ourselves, our attitude and behavior toward each other, in order to recover our ecosystem’s harmony.

The time for that is now. Therefore, we need to encourage and support the young generation to grease the wheels of recovery, leading humanity to a state of tranquility and balance on all levels in nature.

Add The Good Force To The Evil Force

“2019: The Year Anti-Semitism Became As Routine as Breakfast” (The Times Of Israel)
Podcast Powered by podPress (v8.8)