Our Planet Is Only As Big As A House!

“And that is how I made another crucial discovery: our entire planet is only as big as a house!” (Antoine de Saint Exupéry, The Little Prince)

From a Cnet Blog Post: Proof of Six Degrees of Separation
“In a research paper from June 2007, titled ‘Worldwide Buzz: Planetary-Scale Views on an Instant-Messaging Network (PDF),’ Eric Horvitz of Microsoft Research and Jure Leskovec of Carnegie Mellon University analyzed 30 billion conversations among 240 million people using Microsoft Instant Messenger in June 2006. It turned out that the average path length, or degree of separation, among the anonymized users probed was 6.6. 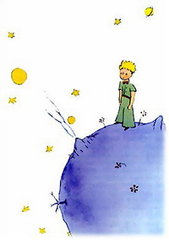 Today, we lack the understanding of how the world becomes disclosed to us. For instance, our senses perceive something to the extent that this “something” is disclosed to them, and beforehand, it is as if this “something” had never existed. In other words, something we perceive is born in the same moment we discover it. Just take a look at the laws of nature we know about today: until we discovered them, it was as if they had never existed. Obviously, they had always existed, but we simply couldn’t perceive them: they existed in potential, instead of in action, with regard to us.

Baal HaSulam explains that the world is divided into a revealed and a concealed (secret) part. Therefore, the time we will discover the true connection among people (souls), we will know (with Mocha – mind) and feel (with Liba – heart), simultaneously, that everyone in the world is solely dependent on everyone else’s goodwill: People’s attitudes of love or hate will determine whether or not they will bring life or death upon others.

The 13th issue of the Kabbalah Today publication is now available.

Anything but Survival
The game show, Survivor, is an excellent example of how not to behave in order to survive in our world. But are we – people of the world, stranded on planet Earth – really that different from the contestants on Survivor?
Read Article >>>

To Be or Not to Be?
Death is one of the most unsettling, yet fascinating, phenomena we all face. At one point or another, it touches the lives of each of us, forcing us to ask profound, seemingly unanswerable questions.
Read Article >>>

The obsession with Facebook expresses a deep rooted desire within each of us—to feel connected with everyone. But does the largest virtual community really deliver the new and improved social world we seek?
Read Article >>>

Tom, Jerry and Our Children
Today, even Tom can’t help us teach good values to our children. Not to mention Jerry…
Read Article >>>

Extras – Why Does Love Always Hurt?
Love always hurts us, because in our world, love is based on the needs of the ego. Whether we are aware of it or not, our love always comes with the calculation: “Is it worthwhile for me or not?”
Read Article >>>

“Light” – the Kabbalistic Meaning
The word “Light” brings all kinds of positive associations to mind. But in Kabbalah, Light is higher than anything we can imagine – it is, in fact, a quality of the Creator Himself.
Read Article >>>

We all begin our lives perceiving and living in this corporeal world, until one day we discover a unique desire for something new and different, mostly called “spirituality.”
Read Article >>>

Kabbalah: User Manual
What’s it All About?
Although we often feel like isolated individuals and see a world of schisms, Kabbalists say that we are all interconnected and interdependent.
Read Article >>>

Cellular memory is an interesting phenomenon: a recipient of an implanted organ acquires certain characteristics and habits of the organ’s previous possessor. People with implanted organs assert that their preferences, behavior, and social manners have changed. Some people suddenly develop interests in arts, those that feared heights become mountain-climbers, and so on…

Kabbalah says that our entire body is a complete, sole mechanism and it is impossible to implant something foreign into it, without having the entire organism incorporated into this change. This is because each cell has its own brains, memory and modus operandi; it perceives the entire body and participates in the body’s full operation. The work of the cell in sustaining the life of the body stems from taking part in the operation of the entire organism.

In light of this, we can only guess how tightly we are all connected within that whole organism of our earthy civilization – and how we share our properties with one another.

As both our individual and collective egoism continues to grow, the interdependence and interconnection among all people will become more apparent. Thus arises the opportunity for us to establish completely new principles of upbringing and education. These principles will be based on our influence on one another and the interconnection of all people within a single, common organism.

That brings us to the method of attaining a common, harmonious society – similar to a healthy organism – based on the principles of complementing one another, and keeping the balance between the two forces of creation: reception and bestowal.

This means that everyone’s soul is completely connected with both its upper and lower soul, and therefore lacks its own free space. Realizing that will bring humanity to absolute integration.