Humane Laws in the Jungle, Law of the Jungle in Civilization

It seems to us that nature is governed by the law of survival of the fittest. But in fact, this couldn’t be farther from the truth, because the interconnection among all species forces them to care about each other’s survival. Zoologists, for instance, know that the fierce fights between animals always end with peace, and never lead to death or even injury, because they fight only to establish the hierarchy within the pack.

An outside view on a living organism might suggest that it’s completely controlled by blind nature: it seems that hostile forces surround it as it struggles for survival. However, scientists are discovering that everything is dynamically balanced, and survival is based not on struggle, but on the mutual cooperation among all species, where both support and struggle complement and balance one another, thus creating equilibrium.

Even the roots of different plants coalesce and create a unified system, as plants with less developed roots receive additional support from stronger ones. When one species of plants is being replaced by another, it isn’t a struggle for territory, but a developmental process of the circle of life.

The interaction between plants and insects is no secret either: flowers give insects food (nectar), while the insects transport pollen, thus ensuring fructification. Even the size of insects corresponds to the shape of the flowers in a way that helps them with the selection of pollen. The interdependency among plants and animals is so strong that the extinction of certain types of plants leads to the disappearance of certain animals. And that, in turn, leads to the extinction of another type of plants and animals, because everything is interconnected within nature’s all-inclusive system.

As it happens, in addition to a struggle for survival, there is also cooperation in nature, both within the species and between them. And the reason for this is not anyone’s direct, self benefit, but simply because everyone’s survival is possible only through the interconnection with all the others.

Interviewed by a Cairo Weekly Publication

I was just interviewed by Fatma Dervish, a reporter for a Cairo weekly publication, Alyoum El Sabaa (The Seventh Day):

Fatma is quite familiar with Bnei Baruch through our English and Arabic sites. In addition to her work in the media, Fatma is writing a doctoral thesis at Cairo University on Bnei Baruch. 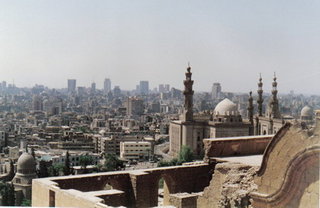 A question I received from Chanah, in response to the post Why Kabbalah Disgusts Us: I thought that existence in egoism is only a shadow of a far removed reflection of the Creator – so the Creator is not actually “making misery” … it’s our inability to sense correctly, right? What I sense as struggle is the fact that I cannot rely on most of my perceptions to navigate to the truth, yet I’m required to move forward.

My Answer: If we would continue progressing egoistically, remaining in our inborn egoistic nature, we would navigate ourselves with whatever we know in our familiar egoistic understanding of the world. However, if we want to progress toward spirituality, we need to exit our egoistic nature and enter into an opposite, unknown nature. As such, we need to progress “in the dark,” so to speak, in qualities and feelings that we don’t yet perceive, and continue progressing like this until we master these new qualities and learn to live in them.