All work before joining the group is a preparation for the real work. When I start getting involved in it, it is as if a progress bar begins to scroll showing the percentage of the downloaded program. To the extent of my inclusion in the group, a space is formed for the thought of Creation to enter and fulfill me.

– Are the efforts to adhere to the Creator individual or work in the ten?
– All individual work is to be included in the ten. Although you may need a lifetime to do that, even more than one. There is no choice, we have to work on our unity to be in sync with the nature of the world, or it will erase us from the globe.

My new article is published in @TimesofIsrael
“Anti-Semitism in Fashion: When Anti-Semitic Symbols Become Trendy”
>>>>>>>>>>>> … 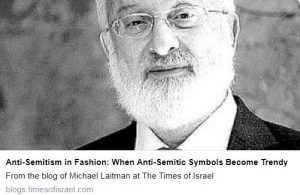 The Upper force fills us, reformatting us, like a progress bar on a computer that shows the percentage of the upload as it reaches 100%. The thought of Creation also affects us, penetrating us according to our efforts. Meaning, we become filled with the Creator and adhere to Him

The Creator’s thought will reformat and organize us so that in everything inside us, in all “620” parts, our desires, we will begin to feel the Upper force acting in us.
#wisdomofkabbalah #kabbalah #Wisdom

This thought penetrates us, like a program downloaded to a computer, at our own request and demand. The Creator formed an idea, we are a part of it and become involved in it. In addition, He gave us the opportunity to reformat ourselves in the likeness of this thought, and by doing so become included in the Creator.

As in this world, when we get closer to someone, we gradually begin to acquire their tastes and habits, so do we, wishing to connect with the thought of Creation, will begin to take on the form of the Creator, adopt His thought making it our own. Thus we’ll reach adhesion with Him

The more effort we put into attaining the thought of Creation, the more we develop, change our form, and advance along the axes of time. We will undergo various changes and will realize that we are beginning to take His form.

I affirm that, in reality, there is none else besides Him, and that I too am included in this concept. I don’t want to bring any changes into reality, I only want to attain the Creator, unite with the thought of creation. This means to adhere to the Creator.
From Twitter, 8/28/19

Friends, I Need You